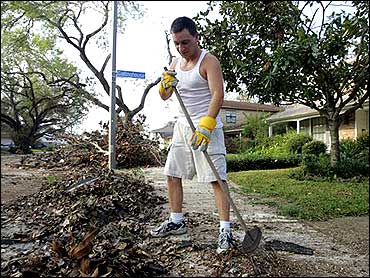 Sharyl Attkisson reports on the return to New Orleans

6:24 p.m.
NEW ORLEANS (AP) — The Louisiana state Health Department raised the death toll from Hurricane Katrina in Louisiana by 90 to 736. The toll across the Gulf Coast was 973.

About 56 percent of the Gulf's oil production remained out of operation Monday, reflecting damage in the Gulf and on shore from Katrina. About one-third of the Gulf's gas production was also out, the agency said. Those figures were barely changed from Friday.

3:08 p.m.
NEW ORLEANS (AP) — The mayor of New Orleans may be having second thoughts.

His spokeswoman says Ray Nagin is now re-thinking the timetable for bringing people back to the city. She says that's because of "external factors," such as a tropical storm that's headed toward the Gulf of Mexico.

Earlier, Nagin bristled at what he suggested was federal interference. He said the federal official in charge of the recovery effort, Coast Guard Vice Admiral Thad Allen, was acting like "the newly crowned federal mayor of New Orleans."

Allen, and then President Bush, voiced concerns about Nagin's decision to allow people back into New Orleans one neighborhood at a time, starting today. They both suggested that New Orleans might still be unsafe, and that it couldn't yet support a large-scale return of residents.

The mayor has scheduled a news conference at mid-afternoon.

2:32 p.m.
(CBS) — A White House spokesman won't say whether President Bush feels he has the authority to overrule New Orleans Mayor Ray Nagin in order to stop the return of residents to the city, CBS News Radio correspondent Mark Knoller reports. But President Bush does say he has deep concerns that Tropical Storm Rita could cause another break in the levees.

1:48 p.m.
NEW ORLEANS (AP) — It's been stop-and-go traffic across the main highway into New Orleans this morning. National Guard trucks and emergency vehicles are sharing the road with pickup trucks loaded with water, cleaning materials and coolers.

Returning residents are finding streets lined with trash bags and discarded refrigerators, their rotting food still inside. Stacks of mattresses and damaged furniture and other goods are piled at the curb for pickup. One returning business owner says his customers have moved away. He figures he'll have to look for construction jobs now, because, as he put it, "That's about the only thing around."

"If it were to rain a lot, there is concern from the Army Corps of Engineers that the levees might break," Mr. Bush said. The president also said he shares the dream of Mayor Ray Nagin to get New Orleans up and running again. but the president says it's just a matter of timing, Knoller reports.

11:02 a.m.
KENNER, La. (CBS) — When New Orleans residents moving back into the city pass through here, they're stopped at a checkpoint on I-10 and given a handout that notifies them they are entering at their own risk, CBS News correspondent Cami McCormick reports. The handout also reminds them that New Orleans remains a hazardous site.

But there were no indications this morning that local officials would stop them from returning, despite President Bush's concerns.

9:45 a.m.
ALGIERS, La. (CBS/AP) — A steady stream of traffic rolled into Algiers Monday morning. The mayor said that police would be checking residents' identification to make sure they lived in the areas reopened. Algiers, which is across the Mississippi River from downtown New Orleans, saw little damage from Hurricane Katrina and was the first section to be reopened.

Over the next week, the city's Uptown section, the Garden District and the historic French Quarter are also set to open to residents and businesses at Mayor Ray Nagin's invitation, bringing about one-third of New Orleans' half-million inhabitants back.

8:10 a.m.
KENNER, La. (CBS) — An official in the city of Kenner, just west of New Orleans, has been removed from his task of distributing donated goods, pending investigation, the mayor's office tells CBS News correspondent Dan Raviv. Some witnesses say city employees, at night, have been raiding stockpiles and taking some of the donated goods for themselves.

7:14 a.m.
WASHINGTON (CBS/AP) — When television or the Internet were not an option for survivors of Hurricane Katrina, many turned to battery-powered radio — just as people caught in natural disasters have done for decades.

In many cases, local updates broadcast in the battered Gulf Coast came from reporters quickly sent in from outside the area and from disc jockeys pressed into service as news anchors. Many stations today do not employ reporters, so the scramble was on once the hurricane hit.

When New Orleans Mayor Ray Nagin wanted to lash out at federal officials for the slow response to Hurricane Katrina, he called WWL-AM. Hundreds of stranded hurricane victims telephoned the city's oldest radio station, too. Desperate for information on missing loved ones, they also needed to know where to seek shelter and food.

With the help of backup generators, WWL managed to stay on the air when other local broadcasters could not.

7:10 a.m.
LOS ANGELES (AP) — Katrina laced the glitz and glamour of last night's Emmys. Most participants recognized the tragedy subtly, wearing magnolias on their lapels. The magnolia is the state flower of Louisiana and Mississippi.

But there was high profile recognition, as well. Stars urged viewers to donate money for disaster relief. Patricia Arquette said she's lost sleep thinking about the poverty spotlighted by Katrina. In Arquette's words, "This is like wartime." As Emmy host, Ellen DeGeneres cracked jokes while her hometown of New Orleans struggles to recover from Katrina. DeGeneres said, "It's times like this that we really need laughter."

7:06 a.m.
NEW ORLEANS (AP) — Troops going house-to-house in New Orleans are finding out just how busy looters were after Hurricane Katrina. They've found automatic teller machines that had been emptied of cash and bags of ammunition packaged in 500-round bundles.

A church-run assisted living home was full of bicycles, stereos and clothing. Inside another home, the soldiers found stacks of car parts and a video game system with a pawn shop ticket still attached. A man returning to the home told soldiers someone else must have broken in and stashed the loot after he evacuated.