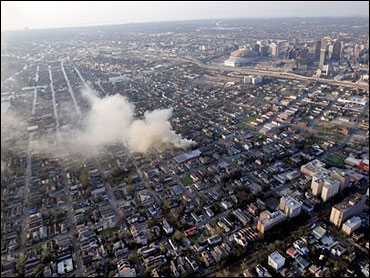 10:32 p.m.
BILOXI, Miss. (AP) — It will take $500 million dollars to repair the damage to Keesler Air Force Base from Hurricane Katrina. That assessment comes from Brigadier General Bill Lord, wing commander of the 81st Training Wing.

Keesler is a major training and medical center for the military. It sits between the Gulf of Mexico and the Back Bay of Biloxi in Mississippi. Keesler's medical center is the second largest in the Air Force. It suffered extensive damage from Katrina's flooding and has been shut down.

8:40 p.m.
NEW YORK (AP) — The Bush administration says it won't stand in the way of news media reporting on the recovery of bodies. But it won't necessarily help. CNN had filed suit against FEMA after two government officials said they didn't believe it was right for the media to show pictures of Hurricane Katrina victims.

The government says it won't stand in the way of that coverage. But photographers won't be allowed to join workers in boats or helicopters during the recovery. CNN agreed to the government's stand and has put its lawsuit on hold.

Byron Pitts on the resilient NOPD

Trish Regan on a family's odyssey

7:26 p.m.
BATON ROUGE, La. (AP) — The Red Cross is looking for a few good volunteers, 40,000 to be exact. The goal is to train them and dispatch them to Gulf Coast states to assist in long-term hurricane relief efforts.

6:26 p.m.
AUSTIN, Texas (AP) — Vice President Cheney calls hurricane relief in Texas an enormous success story. The vice president visited a shelter today in Austin, where he told reporters the state has turned out in remarkable ways and has done a lot of things right.

Cheney says the evacuees he met are thankful and uniformly positive, and he says none of those he spoke with mentioned any problems with the relief effort. In answer to a question, he said he supports the decision to reassign FEMA director Michael Brown.

3:39 p.m.
NEW ORLEANS (AP) — Some of those helping out in the aftermath of Hurricane Katrina are veterans of 9/11 who say they're returning a favor. New York fire captain Jim Rallis says after New York was attacked, the New Orleans Fire Department donated a truck called the "Spirit of Louisiana."

3:05 p.m.
NEW ORLEANS (AP) — As crews continue the search for people killed and people stranded by Hurricane Katrina in New Orleans, officials report that the confirmed death toll in Louisiana stands at 154. Boatloads of forensic workers, helped by cadaver dogs, have fanned out today across New Orleans to collect the corpses.

Meanwhile, the police chief in New Orleans says his officers are "definitely in control" of the city. After the lawlessness that was seen in the days after Hurricane Katrina hit, chief Eddie Compass says, "We've been almost crime-free for the last four days." He says officers are patrolling all areas with National Guard troops and others.

1:20 p.m.
NEW ORLEANS (AP) — A firefighter from Maryland says the water level in New Orleans appears to be dropping by six to 12 inches a day. And that's allowing the cleanup to get under way.

It's begun at the convention center, where piles of trash are being hauled away from the former evacuation center. An official of a company that specializes in disaster cleanup says his crews are finished cleaning up city hall. Trash from there has been dropped at a temporary dump in a downtown parking lot.

11:35 a.m.
NEW ORLEANS (AP) — Here and there, something normal is happening in New Orleans. Not all the city is flooded. Not all homes are destroyed. And even though authorities are still encouraging people to leave, some of those who are living on dry streets have quietly been allowed to go about their lives. A few people hang out at night in neighborhood bars, drinking warm beer by candlelight.