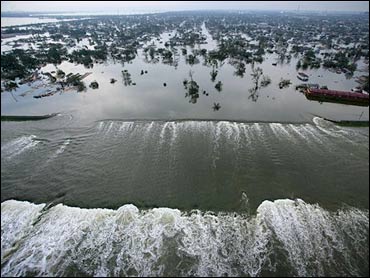 This is a running list compiled by CBSnews.com staffers of the latest developments in the Hurricane Katrina disaster.

9:00 p.m.
NEW ORLEANS (AP) -- New Orleans Mayor Ray Nagin has pulled 1,500 cops off their search-and-rescue mission and reassigned them to go after looters. Nagin tells The Associated Press that looters are starting to get closer to heavily populated areas including hotels and hospitals. He says police will "stop it right now."

8:10 p.m.
WASHINGTON (AP) -- Members of Congress are among those who have lost their homes to Hurricane Katrina. The highest-profile lawmaker impacted by the storm: Mississippi Senator Trent Lott. His antebellum home in Pascagoula was leveled by the storm surge. Lott's press secretary says Lott and his wife are driving to Pascagoula to search for anything that might be left.

Anthony Mason on the energy crisis

6:00 p.m.
NEW YORK -- CBSNews.com's Brian Montopoli writes about the problems the media are facing in covering what has been called the worst U.S. natural disaster in history. It can be dangerous work -- one CBS correspondent was handed a knife by a police officer, who told her she would need it.
Media Struggles To Cover Katrina

5:10 p.m.
WASHINGTON (AP) -- President Bush said Wednesday his administration was moving quickly to save lives and provide sustenance to uncounted victims of Hurricane Katrina but recovery "will take years'' from the storm that laid waste to the Gulf Coast.

"We're dealing with one of the worst national disasters in our nation's history,'' he said at the news conference hours after an aerial tour of the area.

"This is going to be a difficult road,'' he added, and made it clear the impact could broaden well past the four states along the battered coast.

"Our citizens must understand this storm has disrupted the capacity to make gasoline and to distribute gasoline,'' the president said.

4:45 p.m.
WASHINGTON (AP) -- Surging energy prices and business disruptions from Hurricane Katrina, likely the costliest natural disaster in U.S. history, threaten to slow what has been a steadily expanding economy.

The powerful and deadly storm devastated much of the Gulf Coast area in the South, knocking out oil refineries, shuttering businesses and crippling the flow of commerce through ravaged ports.

While the damage has yet to be fully assessed, economists and other experts believe the disaster will rack up insured losses of up to $25 billion. That would surpass the $21 billion (in inflation-adjusted losses) stemming from Hurricane Andrew in 1992, analysts said.

4:00 p.m.
NEW ORLEANS (CBS) -- Video today from helicopters flying over New Orleans reveals just how much of the rescue operation still remains. Some multi-story housing complexes are still crowded with people at the windows, on balconies, or on rooftops. They're waving sheets and makeshift flags. Two children on a rooftop held up a sign that read, ``Help us.''

3:30 p.m.
One day after Katrina hammered the Gulf Coast, German commentators are laying into the U.S. for its stubborn attitude to global warming and Kyoto.

2:30 p.m.
NEW ORLEANS (AP) -- Hurricane Katrina probably killed thousands of people in New Orleans, the mayor said Wednesday an estimate that, if accurate, would make the storm the nation's deadliest natural disaster since at least the 1906 San Francisco earthquake.

"We know there is a significant number of dead bodies in the water," and other people dead in attics, Mayor Ray Nagin said. Asked how many, he said: "Minimum, hundreds. Most likely, thousands."

1:55 p.m.
WASHINGTON (AP) — Federal officials declared a public health emergency for the entire Gulf Coast Wednesday, calling the life in the aftermath of Hurricane Katrina "very dangerous." They rushed food, medicine and water to the victims as part of a wide-ranging government rescue-and-relief response.

1:23 p.m.
NEW ORLEANS (AP) — The top Homeland Security official in New Orleans says bands of gunmen are roaming through New Orleans. Terry Ebbert says looters have been breaking into stores all over town to steal guns. The Times-Picayune newspaper reports the gun section at a new Wal-Mart has been cleaned out. And the thieves are apparently using their new guns, with shots heard through the night.

Guns aren't the only things drawing the thieves. People commandeered a forklift in high ground to lift storm shutters and break the glass of a Rite-Aid pharmacy. A crowd stormed the store, carrying ice, water and food.

12:50 p.m.
WASHINGTON (AP) — In what it said was its largest-ever mobilization, the Red Cross reported that more than 45,000 victims of Hurricane Katrina were housed in its shelters Wednesday and the number was growing steadily. Some 250 shelters were open in the storm-damaged area and the Red Cross set up 15 emergency kitchens capable of feeding 350,000 people.

"This is our largest mobilization in the history of the organization,'' said agency spokeswoman Deborah Daley said.

11:57 a.m.
(CBS) — CBS News Tech Analyst Larry Magid reports Katrina has not only had a major impact on the physical infrastructure of hospitals and other emergency facilities throughout the Gulf Coast, it has also impacted vital data centers. Fortunately, some facilities are protected with redundant remote systems that store data away from the region.

Magid talks with Chris Wall, CEO of PHNS, a Dallas-based healthcare technology firm that helps hospitals with their information infrastructure. Wall describes the damage to some health care facilities as catastrophic but says that, in many cases, patient records are well protected.

11:50 a.m.
SAN JOSE, Calif. (AP) — The New Orleans Saints will head to San Antonio after Thursday night's exhibition game against the Oakland Raiders. That's after most of New Orleans was flooded in the wake of Hurricane Katrina.

The team has been practicing this week in San Jose, California. It'll fly to Texas after their final preseason game to begin preparing for the season opener at Carolina on Sept. 11.

11:34 a.m.
VATICAN CITY (AP) — Pope Benedict says he's praying for victims of Hurricane Katrina. In a telegram of condolences, Benedict says he's "deeply saddened" to learn of the wrath of Hurricane Katrina, which slammed into the Gulf Coast states of Louisiana, Mississippi and Alabama on Monday. He's urging rescue workers to persevere in bringing comfort to survivors.

The telegram, sent by the Vatican's secretary of state, says the pope is praying for the victims and offers consolation to their families.

Officials also say that it could take close to a month to get all the flood water out of the city. If the water rises a few feet higher, it could also wipe out the water system for whole city.

11:21 a.m.
NORFOLK, Va. (NNS) — The U.S. Navy announces three amphibious ships and a rescue and salvage ship based in Hampton Roads are getting underway Aug. 31 and heading for the Gulf of Mexico to support relief operations along the U.S. Gulf Coast following widespread destruction caused by Hurricane Katrina.

11:12 a.m.
HOUSTON (AP) — The evacuees from Hurricane Katrina who've been housed at the Louisiana Superdome will be headed to Houston — where shelter is being set up for them at the Astrodome. The Federal Emergency Management Agency is providing nearly 500 buses for a convoy that will begin today, traveling the 350 miles to Houston.

10:56 a.m.
NEW YORK (CBS) — The Federal Emergency Management Agency's Deputy Director Patrick Rhode tells CBS News' Peter Maer the current mission centers on lifesaving as crews continue the search for survivors. He calls it a "very aggressive search and rescue effort." He warns "The storm is just as dangerous after the storm as it was during" the disaster. He cautions people should not even think about returning to their homes. With countless people left homeless, Rhode says his agency is considering "all options" for housing. He says officials will attempt to settle storm victims close to their former homes but he cautions, "We're probably going to have bring some people a little bit further from home than we would like." He says the government is confronting "an enormous task" to try to identify temporary housing. Asked about reports that FEMA is considering cruise ships and mobile homes for temporary housing, Rhode would only say, " We're considering every available option to us."

He says it will be a long term housing recovery effort.

8:30 a.m.
WASHINGTON (AP) — Washington is rushing aid to victims of Hurricane Katrina. The Navy is sending four ships carrying water and other supplies to the Gulf Coast region. The Federal Emergency Management Agency has sent medical specialists from across the country. FEMA says it has 500 trucks of ice, 500 trucks of water and 350 trucks of military meals-ready-to-eat scheduled for distribution in the next 10 days.

8:17 a.m.
WACO, Texas (AP) — President Bush is returning to Washington to oversee the federal response to Hurricane Katrina as aides make arrangements for an expected visit to storm-ravaged areas of the Gulf Coast later this week. Bush cut his monthlong vacation by two days even though aides have long contended that his duties are uninterrupted when he spends time at his ranch in nearby Crawford that has White House-level communications capability.