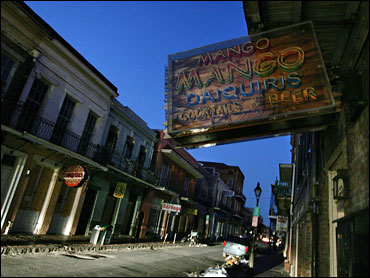 10:31 p.m.
NEW ORLEANS (AP) — Speaking from the heart of New Orleans, President Bush has told the nation that "this great city will rise again." He promised the government will pay for most of the massive reconstruction project along the Gulf Coast.

Bush urged displaced residents to contact authorities to make sure they get the help that's on hand. He says more than $60 billion has been set aside to repair the region. Bush says "our goal is to get people out of shelters by mid-October."

6:47 p.m.
BALTIMORE (AP) — The president of the NAACP thinks people affected by Hurricane Katrina deserve special consideration when the rebuilding effort gets under way. In an interview with AP Radio News, Bruce Gordon says priority should be given to people who lost their jobs when companies start hiring to rebuild. He says people who were driven out of the area should be considered first when temporary housing is built.

Gordon also believes the government should establish a victims fund similar to the one set up after 9/11. He says these people, "who are taxpaying, American citizens, need to have the aid of their government."

Asked if he believes bias played a role in the relief response, Gordon says he doesn't want to deal with that issue. But he adds, "if you're black in America, you're always suspicious, always worried because we have history here."

5:10 p.m.
JACKSON, Miss. (AP) — Mississippi on Thursday sued insurers to force them to pay billions of dollars in flood damage from Hurricane Katrina, saying standard insurance polices have led homeowners to believe they are covered for all hurricane damage, whether from high winds or storm surges.

3:55 p.m.
WASHINGTON (AP) — This will come as little surprise to hundreds of thousands of people displaced by Hurricane Katrina. But the National Oceanic and Atmospheric Administration has concluded that the storm was the most destructive ever to strike the United States.

Katrina's top winds were not as powerful as those of Hurricane Camille, which struck in 1969. And its lowest air pressure was not as low as that of 1988's Hurricane Gilbert. But Katrina was far larger. Hurricane-force winds extended 120 miles from the center. Estimates of the economic damage to the Gulf coast region range as high as $125 billion.

Merlene Maten undoubtedly stands out in the prison where she has been held since Hurricane Katrina. The 73-year-old church deaconess, never before in trouble with the law, now sleeps among hardened criminals. Her bail is a stiff $50,000.

Her offense? Police say the grandmother from New Orleans took $63.50 in goods from a looted deli the day after Katrina struck.

11:48 a.m.
NEW ORLEANS (AP) — Mayor Ray Nagin said Thursday a strict dusk-to-dawn curfew will remain in effect in New Orleans. The mayor also announced that some neighborhoods will be re-opened to residents in phases, starting on Monday.

11:06 a.m.
(CBS) — Marine-wildlife experts are trying to save eight dolphins that were swept away from their aquarium during Hurricane Katrina, the BBC reports. The animals have been spotted off the Mississippi coastline not far from their former home at the Marine Life Aquarium in Gulfport, Miss.

Rescuers hope to train the dolphins, which have stayed together in a group, to jump onto mats alongside boats so they can be safely brought into saltwater tanks to recover. If the dolphins cannot be trained, they will be netted, the aquarium's owner told the BBC. Because these bottlenose dolphins have lived most of their lives in captivity, experts say they cannot fend for themselves in the wild.

10:22 a.m.
(CBS) — After Hurricane Katrina struck Louisiana and Mississippi, some unprecedented ideas were thrown around in the White House, President Bush's counsel,

"About the 24 (or) 48 hours after the storm had hit and really when the flooding really happened and we were having the problems with security in New Orleans, we were debating within the administration of invoking a very rare act, the Insurrection Act, to try to bring some chain of command structure to the effort," Bartlett told CBS News.

8:51 a.m.
WASHINGTON (AP) — A total of 68,000 Americans lost their jobs due to Hurricane Katrina and filed for unemployment benefits last week, shoving these applications up by the largest amount in nearly a decade. The Labor Department reported that claims for benefits rose by 71,000 last week, with 68,000 of that total attributed to layoffs due to Katrina, which devastated New Orleans and other areas along the Gulf Coast. That figure exceeded the claims filed in the weeks following the Sept. 11 terrorist attacks, and analysts predicted that it would be revised even higher once states catch up with processing a flood of claims.

7:21 a.m.
(CBS/AP) — In his fourth trip to the hurricane-ravaged Gulf Coast, President Bush is scheduled to give a nationally televised address on both his short-and long-term recovery and reconstruction plans for New Orleans and other stricken areas.

Mr. Bush plans to make a prime-time address from New Orleans on Thursday to offer new federal spending for the monumental task of helping hurricane victims rebuild their lives.

7:12 a.m.
(AP) — The body count in Louisiana has climbed to 474, and it is expected to rise further as state and federal officials go about the tedious task of collecting bodies and identifying them through DNA tests. The total death toll in five states has reached 710.

6:45 a.m.
JOPLIN, Mo. (AP) — A garage apartment that was the site of a deadly shootout between lawmen and outlaws Bonnie and Clyde has become a temporary home for a family displaced by Hurricane Katrina.

"It's a great thing to be able to help people," said the Rev. Phil McClendon, who owns the apartment. He decided to let the family from Carriere, Miss., stay there for at least three months. Earlier this month, city officials rejected his efforts to turn the apartment into a bed and breakfast. Neighbors had objected, saying the bed-and-breakfast plan was in poor taste.

The 1933 shootout, which claimed the lives of two lawmen, happened in the middle of Bonnie Parker and Clyde Barrow's two-year spree of robbing banks in Texas, Oklahoma, Missouri, Louisiana and New Mexico.

6:30 a.m.
WASHINGTON (AP) — President Bush is scheduled to make his fourth trip to the hurricane zone Thursday. First stop is Mississippi; he'll then head to New Orleans, where he will address the nation Thursday night to outline both his short- and long-term recovery and reconstruction plans for New Orleans and other stricken areas.

5:45 a.m.
NEW ORLEANS (AP) — New Orleans Mayor C. Ray Nagin says he expects about 180,000 people to return to the city within a week or two, when power and sewer systems are restored. In Mississippi Gov. Haley Barbour also has his mind on homecomings. He says the state has secured the use of a small cruise ship to house hundreds of evacuees willing to live on it.