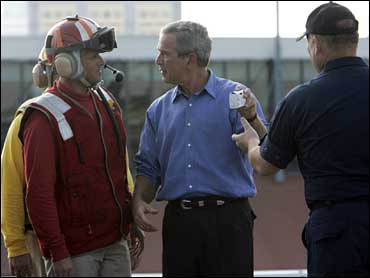 10:46 p.m.
BATON ROUGE, La. (AP) — Clarence Brown, the singer and guitarist who built a 50-year career playing blues, country, jazz and Cajun music, died Saturday in his hometown of Orange, Texas, where he had gone to escape Hurricane Katrina, his agent said. He was 81.

Known as "Gatemouth" Brown, he had been battling lung cancer and heart disease and was in ill health for the past year.

Although his career first took off in the 1940s with blues hits "Okie Dokie Stomp" and "Ain't That Dandy," Brown bristled when he was labeled a bluesman.

In the second half of his career, he became known as a musical jack-of-all-trades who played a half-dozen instruments and culled from jazz, country, Texas blues, and the zydeco and Cajun music of his native Louisiana.

By the end of his career, Brown had more than 30 recordings and won a Grammy award in 1982.

10:21 p.m.
SAN FRANCISCO (AP) — About 80 dogs have been airlifted from the hurricane-battered U.S. Gulf Coast and taken to new temporary homes in California.

The Sunday flight from Baton Rouge, Louisiana, was chartered for about $50,000 by Texas oil tycoon Boone Pickens and his wife, Madeleine, in a movement dubbed "Operation Pet Lift." The pets were flown to San Diego and San Francisco.

7:15 p.m.
HOUSTON (AP) — Hurricane victims got some help from Muslims today, the fourth anniversary of the al Qaeda attack on New York and Washington.

About two-thousand Muslims volunteered at the convention center in Houston. Muslim leaders say it was coincidence that it was their turn to help on the anniversary but welcomed it as an opportunity to help others, as required by their faith.

The chairman of the board of the Council on American-Islamic Relations also says it's another chance to show that the September eleventh attacks were carried out by Islamic extremists who do not represent the true meaning of Islam.

Religious and community groups who volunteered to help at shelters picked through a random drawing what day they would work. Houston's Muslim community got today.

5:01 p.m.
(AP) - While the New Orleans Saints continue to look for a place to call home this season, questions remain about what actually will happen to their regular abode, the Louisiana Superdome.

After sustaining significant damage during Hurricane Katrina and the following flood in New Orleans, the Superdome could need $100 million, or more, in renovations to become a viable NFL stadium again.

Because New Orleans remains underwater, the Saints have relocated to San Antonio, Texas, for the season.

12:30 p.m.
WASHINGTON (AP) - An army officer says evacuation is not the military's role.

10:00 a.m.
NEW ORLEANS (AP) - The search for bodies in New Orleans was suspended for a few moments today. Firefighters from New Orleans, New York and other cities paused to observe the fourth anniversary of the Nine-Eleven attacks.

Porntip Rojanansunand, who has attained celebrity status in Thailand, along with four other forensic experts departed on a flight to the United States with Thai Prime Minister Thaksin Shinawatra. Thaksin will be attending an United Nations summit in New York.

1:42 a.m.
ATLANTA (AP) - The American Red Cross has set up a national toll-free call center to assist victims of Hurricane Katrina with financial resources and referrals to other services.

Families in need can access the program beginning today at 9 a.m. To apply for aid, those calling in must be ready to provide their name, pre-storm address, ZIP code and home telephone number to call center agents.

12:05 a.m.
NEW ORLEANS (AP) - Cadaver dogs and boatloads of forensic workers fanned out across New Orleans to collect corpses left behind by the hurricane. Cleanup crews tow away abandoned cars and even begin readying a hotel for reopening.