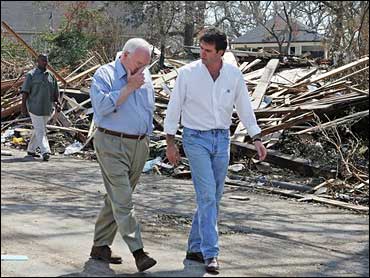 10:33 p.m.
LOS ANGELES (AP) The producer of a telethon to raise money for Hurricane Katrina victims is expecting it to be free of political comments. Joel Gallen is the executive producer of "Shelter From the Storm: A Concert For The Gulf Coast." It will run on the six major broadcast networks and several cable channels Friday night.

Gallen says he has spoken with most of the artists on the bill, including musician Kanye West, who criticized the government relief efforts during an NBC telethon last Friday. One of his comments was, "George Bush doesn't care about black people."

Gallen says the artists agree the telethon should be about raising funds, not political comments. The artists involved include Garth Brooks, Sheryl Crow, the Dixie Chicks, Alicia Keys, U2, Neil Young, and Paul Simon, among others.

9:50 p.m.
FAIRLAWN, Ohio (AP) NBA star LeBron James is standing tall for victims of Hurricane Katrina. He spent about $120,000 in two hours at a Sam's Club warehouse store near his hometown of Akron, Ohio, buying goods for hurricane victims. Four tractor-trailers have been loaded with food, diapers, school supplies and other items for folks in Louisiana, Mississippi and Houston. James, who is 20, plays for the Cleveland Cavaliers.

9:15 p.m.
WASHINGTON (AP) — Regulators say most of the 280 banks and savings and loans in hurricane-stricken areas are operating normally again and officials of the Federal Deposit Insurance Corporation say the institutions aren't expected to have financial problems in the long term.

7:41 p.m.
WASHINGTON (AP) — Acting with extraordinary speed, Congress approved an additional $51.8 billion for relief and recovery from Hurricane Katrina on Thursday. President Bush pledged to make it "easy and simple as possible" for uncounted, uprooted storm victims to collect food stamps and other government benefits.

"We're not asking for a handout, but we do need help," said Sen. Trent Lott whose home state of Mississippi suffered grievously from the storm as lawmakers cleared the bill for Bush's signature less than 24 hours after he requested it. The measure includes $2,000 debit cards for families to use on immediate needs.

6:16 p.m.
(AP) — Details about the debit cards that the government is giving hurricane victims evacuated to the Astrodome in Houston:

11:04 a.m.
(CBS) — It's a game of cat and mouse between residents and police in New Orleans, CBS' Manuel Gallegus reports. Armed officers are everywhere, and residents aren't supposed to be there, but they just walk by each other — no one is being forced out.

The vice president then went into a series of private sessions with state and local officials. He was to tour parts of the town later and hold a news conference.

10:03 a.m.
(CBS) — While saying important progress has been made in post-Katrina relief operations, a spokesman says President Bush continues to be unsatisfied with where things are right now, CBS News correspondent Mark Knoller reports. Scott McClellan says enormous challenges remain to be address and Mr. Bush won't be satisfied untill all the immediate needs of Katrina's victims are met.

9:24 a.m.
(CBS) — Americans are largely dissatisfied with the response to Hurricane Katrina, and blame all levels of government, according to the latest CBS News poll.

Critique fell not only on President Bush, but on FEMA and other government agencies. Eighty percent of those surveyed said the federal government as a whole did not respond as fast as it could.

9:03 a.m.
(CBS) — Brian Gallagher, president and CEO of the United Way of America, said of Hurricane Katrina's destruction: "This is a wake-up call for America. It would be a moral mistake to rebuild certain neighborhoods back the way they were, and economically it would be a mistake."

7:50 a.m.
NEW ORLEANS (CBS) — Emergency workers are being vaccinated against Tetanus and Hepatitis, because officials now say the floodwaters are toxic, CBS News correspondent Cami McCormick reports. Health officials have said it is dangerous to have contact with the sludge, but some people are still wading through it in places. And in some cases, people who have been stranded were reportedly drinking the water — because they had nothing else.

The altercation began when the man walked up the center aisle and said he had an announcement. The flight attendant tried to persuade him to return to his seat at which point the man announced he is "a man." He then allegedly pushed and slapped the flight attendant.

7:21 a.m.
OCEAN SPRINGS, Miss. (AP) — It used to be a K-mart and now it's a major relief site. FEMA has opened its first relief center in Mississippi in the town of Ocean Springs. Hundreds of people at a time piled into the old vacant store yesterday to talk with officials from FEMA and other federal and state agencies.

7:09 a.m.
NEW ORLEANS (CBS) — As city officials and police evacuate the remaining holdouts in the city, federal officials are preparing 25,000 body bags, CBS News correspondent Cami McCormick reports. The mayor of New Orleans has said he expects to find many corpses now that the floodwaters are receding. That could also be the scenario in hard hit places such as St. Bernard Parish — where entire neighborhoods were under water.

6:14 a.m.
BRUSSELS, Belgium (AP) — The United States has asked NATO to take on a bigger role transporting European aid to areas hit by Hurricane Katrina. A special meeting of the allies ordered military experts Thursday to draw up plans for an expanded role, including the possible use of ships from the elite NATO Response Force. NATO planners are discussing the plans with the U.S. Northern Command.

4:12 a.m.
CAPE CANAVERAL, Fla. (CBS) — Katrina was no big deal for the Kennedy Space Center, but it did leave big footprints on NASA, according to a published report. USA Today says an internal memo written by the top boss of the space shuttle program says hurricane damage to Gulf Coast shuttle facilities, combined with other technical problems, may delay the next shuttle flight until late next year.

The shuttle's fuel tanks are reportedly built at a plant in New Orleans, its engines are tested in coastal Mississippi, and many workers at both facilities are evacuees who are at least temporarily homeless.

3 a.m.
NEW ORLEANS (CBS) — Holdouts refusing evacuation from the French Quarter are a little more comfortable: running water has been restored to some buildings. CBS News correspondent Steve Futterman reports the water isn't safe to drink and shouldn't be allowed to touch any cuts or open wounds.

Futterman also reports that although violence in New Orleans has been greatly reduced, there are still reports of random gunfire. The commander of the New Orleans police swat team says officers are being fired at almost on a daily basis. As for the forced evacuation of hurricane survivors - this is something police are trying to avoid as much as possible. Police hope instead to employ friendly persuasion and the sight of visible high-powered weapons.

1 a.m.
WASHINGTON (AP) — Louisiana Democratic Sen. Mary Landrieu is not happy with a GOP congressman's comments on how to handle hurricane relief funds. Colorado Rep. Tom Tancredo is urging his fellow lawmakers not to send money directly to Louisiana state officials or the city of New Orleans.

Tancredo says the state and city governments have a history of incompetence and corruption and that the money should instead be funneled through a private organization or a House committee. Landrieu, for her part, says it's a shame that a U.S. congressman is wasting everyone's time with stereotypes and accusations rather than trying to help.

12:15
ST. LOUIS (AP) — A self-proclaimed white separatist was sued Wednesday for allegedly setting up improper Web sites to collect donations for Hurricane Katrina victims with no evidence the funds will ever reach them.

Missouri Attorney General Jay Nixon is asking the court to shut down the Web site internetdonations.org, which he said serves as a collection point for at least 10 sites operated by Frank Weltner with hurricane relief-related themes. He said Weltner also operates, from the same post office box, a web site Nixon's office said is widely regarded as an anti-Semitic hate speech site.

12:01 a.m.
CHICAGO (AP) — Animal lovers are coming to the rescue of zoo and aquarium wildlife stricken by Hurricane Katrina. Lincoln Park, Illinois, Zoo Director Kevin Bell is leading a fundraising campaign by the American Zoo and Aquarium Association to help the Audubon Nature Institute in New Orleans, which includes the zoo and the aquarium - which lost most of its fish collection.

Three Chicago-area zoo and aquarium association members - Lincoln Park Zoo, Brookfield Zoo and Shedd Aquarium - have pledged $35,000 apiece for the Audubon Relief Effort. Other major offers include $35,000 from Disney's Animal Kingdom in Florida, $20,000 from Sedgwick County Zoo in Wichita, Kan., and $10,000 from the Minnesota Zoo in Apple Valley, Minn.