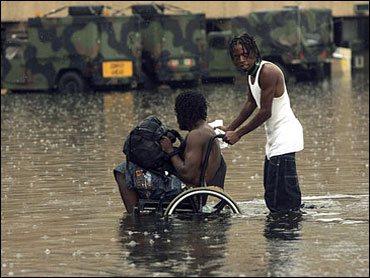 Flanked by teammates and Louisiana natives Ed Reed and Alan Ricard, Sanders on Friday called for each team in the NFL, NBA and Major League Baseball, as well as other pro sports, to help him reach a goal of $1.5 million to $3 million for the cause.

Byron Pitts on glimpses of hope

Anthony Mason on the economy

Mark Strassmann on the homeless

Sharyn Alfonsi on the health crisis

Bob Orr on the rebuilding efforts

7:40 p.m.
(AP) - More than 50 countries, including some, like Cuba and Venezuela, that have differences with Washington, have now pledged money or other assistance to help Americans recover from Hurricane Katrina.

4:59 p.m.
(AP) - Americans are responding to Hurricane Katrina with a massive outpouring of giving, at times overwhelming call centers and computer servers set up by charities to field donations.

Total donations passed the $200 million mark today, four days after the storm slammed into the Gulf Coast. The bulk of those funds were collected by The American Red Cross, which said it has already raised $196.9 million from individuals and corporations.

4:53 p.m.
(CBS) - Military families needing assistance locating loved ones and finding support for their families should contact www.militaryonesource.com or call 1-800-342-9647.

4:40 p.m.
NEW ORLEANS (AP) — National Guardsmen using megaphones have told the thousands of refugees at the New Orleans Convention Center that they're about to be fed. For most, it will be the first substantial meal since Hurricane Katrina struck on Monday.

4:10 p.m.
NEW ORLEANS (AP) — President Bush walked through a Biloxi, Miss., neighborhood hit hard by Katrina, consoling two sobbing women along the way. He said the damage along the Gulf Coast is "worse than imaginable."

Bush also acknowledged criticism of the government's actions after the storm, saying he's satisfied with the response but not the results. He stood next to the governors of Mississippi and Alabama while saying the government has a responsibility to "clean up this mess." And he vowed to bring order back to New Orleans.

2:15 p.m.
NEW ORLEANS (AP) — A huge oil spill was spotted near two storage tanks on the Mississippi River downstream from New Orleans, state officials said Friday. The oil was seen in a flyover to the Venice area by the Department of Environmental Quality. "Two tanks with the capacity of holding 2 million barrels appear to be leaking," the department said in a statement.

1:24 p.m.
(CBS) — President Bush has landed in Biloxi, Miss., and is meeting with people there to discuss conditions.

1:05 p.m.
WASHINGTON (AP) — The Federal Emergency Management Agency is sending four mobile morgues to the area struck by Hurricane Katrina. One unit is working in Louisiana and the other three are en route or in staging areas, FEMA said Friday. The death toll in the storm remains uncertain but officials have said it could be hundreds or thousands.

12:55 p.m.
NEW ORLEANS (AP) — A convoy of amphibious vehicles carrying relief supplies is making its through the flooded streets of downtown New Orleans.

12:20 p.m.
(CBS) — The Biloxi (Miss.) Sun Herald is hosting an online message board for survivors of Hurricane Katrina to reach loved ones, find housing or post damage reports. In the past two days, more than 14,000 messages have been posted on the site.

12:01 p.m.
(CBS) — State Department officials say more than 40 countries and several international organizations have offered hurricane aid to the United States. Among those offering assistance are Venezuela and Cuba, both of which have major political differences with Washington, CBS News' Charlie Wolfson reports.

11:47 a.m.
(CBS) — First Lady Laura Bush is set to tour the Cajundome in Lafayette, La. She is expected to meet with people inside the stadium and convention center and make a brief statement.

11:44 a.m.
MOBILE, Ala. (AP) — President Bush promises to restore order in New Orleans and says the $10.5 billion in emergency funds being appropriated by Congress is a small down payment on recovery costs.

UPDATE: Knoller also reports that Mr. Bush plans to meet with the mayor of New Orleans.

11:19 a.m.
(CBS) — In an emergency plan by the Department of Homeland Security, U.S. airlines are being mobilized to fly up to 25,000 refugees out of New Orleans, the New York Times reports. The first-time effort is set to begin today. The Times reports that the department's response plan taps 15 airlines to move the refugees from outside New Orleans to Lackland Air Force Base in San Antonio.

11:08 a.m.
NEW ORLEANS (AP) — The National Guard says the cavalry is coming. Lt. Gen. Steven Blum says 7,000 Guardsmen are arriving in Louisiana today to "to save Louisiana citizens." He says the only thing they'll be attacking is "the effects of the hurricane," but adds they are prepared to "put down" the violence "in a quick and efficient manner."

10:34 a.m.
WASHINGTON (AP) — Hundreds of thousands of people are finding themselves out of work and their livelihoods in limbo following the wrath of Hurricane Katrina. Experts believe it will take months before people get back to work in hurricane-ravaged areas. Some workers may not have jobs to return to and others may opt to move away and find work elsewhere, economists and other experts said.

9:21 a.m.
(CBS) — Part of the struggle to both provide aid to hurricane victims and report on the needs of the hard-hit coastal areas is finding shelter for both responders and reporters, CBS News correspondent Mark Strassmann tells CBSNews.com.

"There are no vacant hotel rooms within 250 miles of Katrina's disaster zone," Strassmann said. "Many people in those packed hotels are storm refugees, their homes blown apart or washed away, with no other place to go. Those rooms will stay booked for weeks to come. If anything, the hotel crunch will only get worse as teams of emergency crews head into these ruined areas. It's going to be a real fight to see who has priority.

"For our CBS crew traveling Mississippi and Louisiana, that means a continuing taste of homelessness. We haven't had a hotel room since we left Baton Rouge on Tuesday morning. That was also the last time we had a shower."

9:11 a.m.
NEW ORLEANS (CBS) — CBS News correspondent John Roberts reports that as tempers flare among those stranded in New Orleans, some residents vow that once they board an evacuation bus, they won't come back.

"I am through with New Orleans," one resident said. "After this situation, I am through. Really, I am."

8:37 a.m.
(CBS) — Officials have said the coastline of Mississippi was ravaged by Hurricane Katrina, but CBS News correspondent Mark Strassmann tells CBSNews.com that, well inland, the search for essentials is frantic.

Due to power outages stretching hundreds of miles, ice is a prized commodity. But nothing compares to the search for gas. In Louisiana and Mississippi, where there's no power, there's no open gas station. So in places like Jackson, Miss., where you start to find gas pumps that actually are working, there are incredibly long lines. People will wait four hours to fill up or top off.

8:16 a.m.
WASHINGTON (AP) — Congress rushed a $10.5 billion recovery bill to President Bush, who called the relief effort the biggest in U.S. history. The last time Congress came back from a vacation early, it made a failed effort to fight the removal of life support from Terry Schiavo, a brain-damaged woman in Florida.

8:00 a.m.
NEW ORLEANS (AP) — The mayor of New Orleans is seething over what he sees as the government's slow response to his city's disaster. Mayor Ray Nagin went on CBS radio affiliate WWL-AM last night to say the feds "don't have a clue what's going on." He added, "Excuse my French, everybody in America, but I am pissed."

7:15 a.m.
NEW ORLEANS (AP) — The explosion that jolted New Orleans awake occurred in a chemical storage facility near the Mississippi River east of the French Quarter, according to Harbor Police. A series of smaller blasts followed the first explosion. At least two police boats are on the scene.

He said the offers are meant to offset shortages in the United States in the wake of Hurricane Katrina.

Speaking on Sky News, Solana said the U.S. administration has approached several EU member states individually. "The member states' offers and the request from the United States have been handled bilaterally, and not through the EU," said Cristina Gallach, Solana's spokeswoman.

4:35 a.m.
NEW ORLEANS (AP) — A series of explosions along the riverfront a few miles south of the French Quarter jolted residents awake. An initial explosion sent flames of red and orange shooting into the pre-dawn sky. A series of smaller blasts followed and then acrid, black smoke that could be seen even in the dark. The vibrations were felt all the way downtown.

The explosions appeared to originate close to the east bank of the Mississippi River, near a residential area and rail tracks. The cause of the blasts, and the extent of any damage, is not yet known.

12:26 a.m.
HOUSTON (AP) — After accepting 11,375 Hurricane Katrina refugees, officials pronounced the Astrodome full and began sending buses to other shelters, some as far away as Huntsville, about an hour north of Houston. "We've actually reached capacity for the safety and comfort of the people inside," says American Red Cross spokeswoman Dana Allen. "We're asking that people be patient. Ultimately they are going to be comfortable."

The number of flood victims inside the Astrodome is less than half the estimated 23,000 people who are expected to arrive in Houston by bus from New Orleans.

12:13 a.m.
TOKYO (AP) — A government source in Tokyo says Japan has begun talks with the International Energy Agency on measures to help ease the petroleum supply situation in the U.S. Gulf Coast area, including a possible release of some of Japan's strategic oil reserves. The IEA began consultations Wednesday with its members on the proposed release of some oil inventories to ease the impact of Katrina's assault on U.S. Gulf Coast oil refining and production.

12:10 a.m.
NASHVILLE (CBS/AP) — R & B legend Fats Domino, reported missing at midday Thursday, is now believed to have been rescued. That's according to his agent, Al Embry, who quotes Domino's youngest son as saying the musician and some family members got a helicopter ride to safety from the New Orleans home where he'd planned to ride out the storm.

The first glimmer of hope for daughter Karen Domino White, tracking events from New Jersey, came in the form of a Times-Picayune newspaper photo of the 77-year-old bluesman apparently being helped to safety — in a boat.