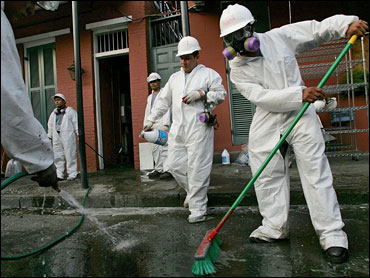 11:11 p.m
LAFAYETTE, La. (AP) — Louisiana made time for a party today. Lafayette kicked off the first full day of the Festivals Acadiens. It's billed as the largest Cajun festival in the world. There was two-step dancing, picnic lunches, jambalaya, and accordions and fiddles.

Lafayette's about 135 miles northwest of New Orleans, and almost all of its 150,000 people are helping shelter someone from New Orleans. This weekend is a chance to throw off the devastation of Hurricane Katrina for a moment.

Festival co-founder Barry Ancelet says the festival's always been, even in good times, an event of cultural survival, and he says people in Louisiana are surviving again. In his words, "It's our social instinct when things go bad."

9:12 p.m.
LAFAYETTE, La. (AP) — Louisiana Governor Kathleen Blanco got an earful when she visited an evacuation shelter Saturday in Lafayette. People swarmed around her, asking when they can go home and how will they live. Most are from New Orleans, some 135 miles away.

One woman complained that she hasn't gotten a paycheck in three weeks, and is running out of money. A man wanted to know when they'll leave the shelter because he's sleeping poorly. A 13-year-old girl wanted to tell the governor "how much we lost," and ask what kind of help they'll get. But as Blanco neared, the girl's shyness won out.

Blanco suggested that evacuees make a list of questions and complaints and have the shelter director forward it to her.

7:58 p.m.
NEW ORLEANS (AP) — A 76-year-old man trapped since Hurricane Katrina has been found in New Orleans in remarkably good shape. Gerald Martin walked out of his house Friday with little help despite having only a gallon and a-half of water and no food for 18 days. Most of that he spent in the attic.

Martin called out to his rescuers as they passed his home in a boat. They cheered when they realized they'd found a survivor, and quickly broke through the door. A spokesman for the Federal Emergency Management Agency says Martin was "very thirsty," but was in "good spirits." He asked if they could stop at a Taco Bell on the way to the hospital.

Martin told rescuers his family had left before the storm, but he stayed to attend church.

5:14 p.m.
NEW ORLEANS (AP) — The Coast Guard has released numbers which partially explain why the death toll in New Orleans from Hurricane Katrina has been lower than expected.

The Coast Guard says that during its first week of operations in New Orleans, it saved the lives of nearly 6,500 people. Officials say almost 5,000 of those rescues were by hoist in areas where the water was just too deep or dangerous for the Coast Guard to come in by boat.

All of those lives were saved by the crews of just 17 helicopters, during 1,500 flight hours in the air.

Coast guard rescue crews have been out in force since then in conjunction with National Guard units, searching for additional survivors, but also recovering the bodies of flood victims.

3:40 p.m.
BATON ROUGE. La. (AP) — The man who heads the federal emergency response to Hurricane Katrina says the city's plan to allow residents to return to some neighborhoods next week is "extremely problematic."

Vice Admiral Thad Allen tells The Associated Press that there are a number of things to worry about. They include water that's okay to use to flush but not okay to drink, security issues and the weakened state of the levies.

Allen says it wouldn't take a category 4 or 5 hurricane to breech the levies again. He says the Garden District, Uptown and the French Quarter could have significant problems. And Allen worries that the city doesn't have a good plan for getting the people out again if they come back in.

1:21 p.m.
WHITE HOUSE (AP) — President Bush is asking for divine assistance in the ongoing effort to recover from Hurricane Katrina.

In his weekly radio address, Bush asked God for help with "the difficult work that lies ahead." Bush painted a picture of a hopeful and vibrant future for the hurricane-battered Gulf Coast and the people there who lost family, jobs, communities and everything they owned.

Saying that "wondrous things are possible when we act with God's grace," Bush told listeners that vibrant new neighborhoods can rise from "the rubble of destroyed homes." He says the hope of rebirth can overcome the despair of lives torn apart.

The president has begun turning more frequently to religious language to comfort suffering evacuees and guide the nation forward, and speaks easily of the strength that his faith provides him.

10:35 a.m.
BATON ROUGE, La. (AP) — Louisiana Governor Kathleen Blanco says there's no room for partisan politics as the Gulf Coast rebuilds from what she calls the "unforgiving winds and wrath" of Hurricane Katrina.

In the Democratic response to the president's weekly radio address, Blanco thanked President Bush and asked for federal help in the "epic task" of reconstruction.

Blanco also delivered high praise for the first responders and ordinary citizens who helped in the rescue and care of Katrina victims.

She says she's determined to bring home displaced Louisiana residents, who are now scattered around the country.

Blanco says as long as the Mississippi flows into the Gulf, she will never forget the generosity of a nation galvanized by destruction "almost beyond comprehension."

12:15 a.m.
NEW ORLEANS (AP) — The police chief in a New Orleans suburb is defending himself against accusations of racism for ordering the blockade of a bridge and turning back desperate hurricane refugees.

Gretna, a town of 17,500 across the Mississippi River from New Orleans, was criticized after Police Chief Arthur Lawson Jr. ordered officers to block a bridge leading into the community, which is almost two-thirds white. New Orleans is two-thirds black.