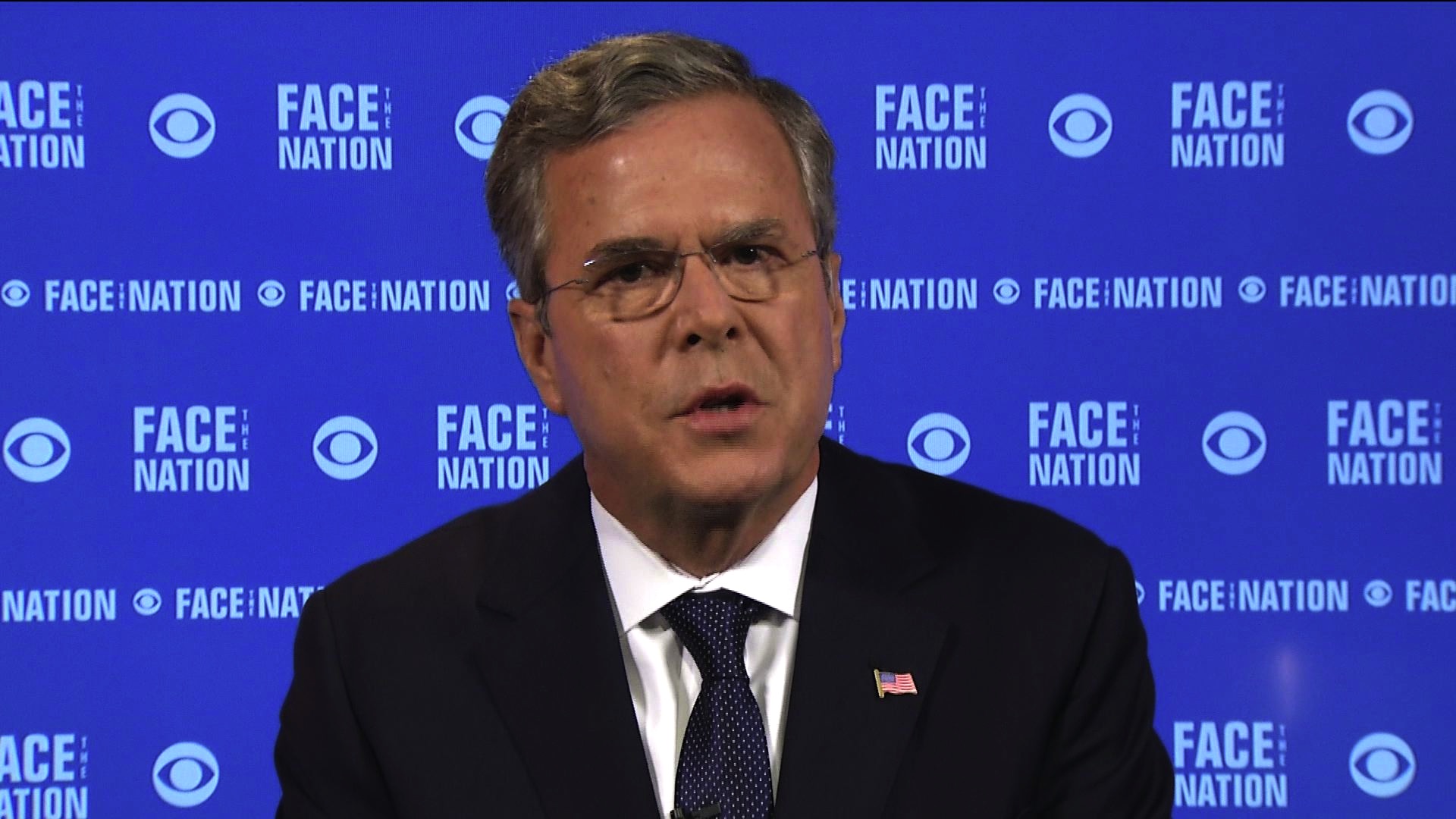 Republican presidential candidate Jeb Bush said "anybody is better than Hillary Clinton" to be president - but that sentiment apparently just barely applies to his fellow candidate, businessman Donald Trump.

"I have great doubts about Donald Trump's ability to be commander in chief. I really do. I wanted to give him the benefit of the doubt to see how the campaign unfolded. But if you listen to him talk, it's kind of scary to be honest with you, because he's not a serious candidate," Bush in an interview on CBS' "Face the Nation" that aired Sunday. "He's all over the map, misinformed at best and praying on people's fears at worst."

Asked by moderator John Dickerson how that, specifically, would be better than Clinton, Bush replied, "I'll let the voters decide about Donald Trump. I'm pretty confident that the more they hear of him the less likely he's going to get the Republican nomination."

The topic of Trump arose after Dickerson asked whether Bush agreed with his national security adviser, John Noonan, who called Trump a "fascist" because he didn't rule out the possibility of registering Muslims in the U.S.

"I just think he's uninformed. He knows what he's saying. He's smart. He's playing you guys like a fiddle, the press, by saying outrageous things and garnering attention. That's his strategy, is to dominate the news," Bush said.

He accused Trump of being "pretty consistently" wrong on the fight in Syria but never being held accountable.

Bush also talked about his own strategy to defeat the Islamic State of Iraq and Syria (ISIS) if he were elected president.

"I'd say a no-fly zone, creating safe zones in Syria, directly arming the Kurds in Iraq, re-engaging both politically and militarily with the Sunnis, the Sunni tribal leaders that were effective partners in the creation of the surge. Have our troops be embedded with the Iraqi military," he said. He said the U.S. needs to destroy ISIS and create political stability in the aftermath.

President Obama has said his military advisers say the U.S. would need to leave an occupational force in Iraq if they were to send in troops - a view Bush called "wrong."

"Had we kept a small force in Iraq, we wouldn't have the mess that we have right now," Bush said, faulting both Mr. Obama and former Secretary of State Hillary Clinton for wanting to get out of Iraq.

"That lack of commitment created the instability that now has created a caliphate. So of course we need to have engagement. And without American leadership this isn't going to happen," he said. "Had we kept 10,000 troops as the military leaders had recommended, we wouldn't have ISIS."

Dickerson also asked about Bush's suggestion that the U.S. give priority to Christian Syrian refugees fleeing ISIS, asking how creating a religious test might play into ISIS' narrative about a battle between Christianity and Islam.

"It is already in the law that there is a requirement to screen for religion. This is the practice of our country," Bush said. "Religious minorities I think should have some preference...I think we ought to do what we can to provide support for the refugees. The best means to do it are safe havens inside of Syria."