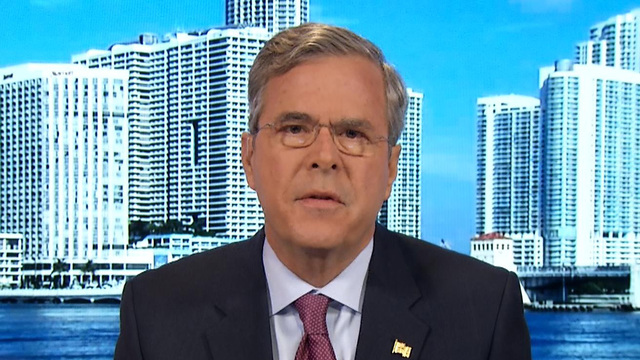 In the wake of the deadly terror attacks in Paris last week, Republican presidential candidate Jeb Bush said the U.S. should focus on creating safe havens for Syrian refugees in the region rather than bringing them to the U.S., and that there is a "special important need" to help Syrian Christians.

"There should be really thorough screening [of refugees coming to the U.S.] and we should focus on creating safe havens for refugees in Syria rather than bringing them all the way across to the United States," Bush said Monday on "CBS This Morning." "But I do think there is a special important need to make sure that Christians from Syria are being protected because they are being slaughtered in the country and but for us who? Who would take care of the number of Christians that right now are completely displaced?"

With the news that one of the Paris attackers may have entered Europe among the wave of migrants leaving Syria, some Republican presidential candidates have called for the United States to halt its Syrian refugee policy. On Sunday evening, Alabama's Republican governor, Robert Bentley, said he would refuse any Syrian refugees seeking to enter his state.

Bush has been more accepting of refugees than some of his fellow candidates, who say they should be sent back to Syria.

He had harsh words for President Obama's handling of the fight against the Islamic State of Iraq and Syria (ISIS) in the interview Monday, repeating the oft-heard charge that the president does not have a strategy to defeat the group.

"We can't coexist with them. We do have American forces in Iraq and in Syria but there's no strategy," Bush said. "A strategy would require American leadership to create a no-fly zone, to create safe havens. It's unconscionable to have hundreds of thousands of people being displaced and have no security possibilities both in Europe and possibly in the United States."

He said winning the fight will require more troops on the ground in the region, including more people embedded with the Iraqi Army, training Kurdish Peshmerga forces and engaging with Sunni tribal leaders. He declined to speculate on the number of troops that would be necessary on the ground, but said that the army fighting ISIS should be composed primarily of people from the region, including the "remnants of the Syrian Free Army."

Pointing to the release of five prisoners from the Guantanamo Bay prison Monday, Bush said, "that's the wrong approach. We are sending mixed signals rather than being clear and concise about this is a fight for Western civilization."

As for whether he sees a role for Russian President Vladimir Putin in the region, Bush said Russia would have to "change its tune" and stop supporting the regime of Syrian President Bashar Assad.

"If Russia changes its tune and says we want to be part of a coalition to defeat ISIS and reach a settlement where Assad leaves, certainly we should talk to him, but it ought to be from a position of strength, not weakness," Bush said. "That's problem with our foreign policy right now; it's incredibly reactive, there is no leadership where people follow us, we are reacting to events."