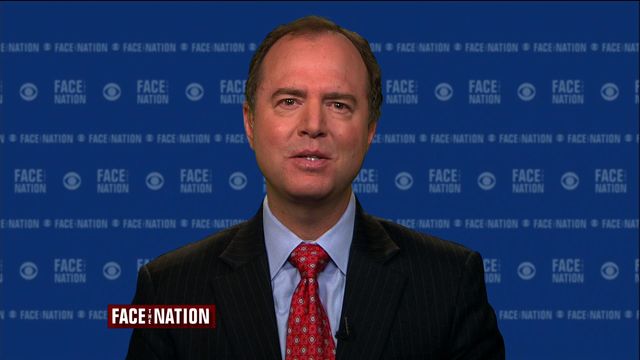 After a 17-month investigation that has cost $4.5 million -- and after grilling Hillary Clinton for 11 hours last week with little to show for it -- the House Benghazi Committee should potentially disband, one of its Democratic members said on "Face the Nation" on Sunday.

"After 17 months and $4.5 million, if we can't say anything new, if we can't shed any new light, or be able to tell the families anything of particular significance that we didn't know already, it's very difficult to justify continuation ever this investigation," Rep. Adam Schiff, D-California, said to host John Dickerson.

The Benghazi Committee is investigating the September 11, 2012 attack on a U.S. facility in Benghazi, Libya that left four Americans dead. Democrats, however, have charged that the committee's GOP leaders are more interested in damaging Clinton politically. Some questioned the point of questioning Clinton for 11 hours last week.

Like many other Republicans, Rep. Devin Nunes, R-California, said Sunday on "Face the Nation" that the hearing was a worthwhile exercise because it highlighted how Clinton immediately characterized the attack as a terrorist event. Nunes said it's worth following up with Clinton as to why the State Department's emergency response team was not deployed if Clinton did, in fact, chalk up the attack as an act of terrorism.

Clinton initially characterized the attack as terrorism, since the group Ansar al-Sharia claimed credit for it. However, the group later withdrew that assertion.

Yet Nunes, chairman of the House Intelligence Committee, said that "it's tough to end up with a position where this was because of some video... I just don't believe that, and I think that's what the Benghazi Committee has to get to the bottom of."

"I think it's important for all of us to remember that Hillary Clinton is one of dozens of dozens of witnesses... [and] she is the one who decided she wanted the public display," he said. "She had it in her mind to make it a political grandstanding occasion."

Both Nunes and Schiff said they hoped Paul Ryan, if elected the next speaker of the House, can make the Congress a more productive place. Ryan announced last week that he will run to replace outgoing Speaker John Boehner if the whole GOP gets behind him.

"If you look at what Paul Ryan has stood for, he is really the guy who has put solutions out on the table" on issues like balancing the budget, tax reform and health care reform, Nunes said.

Yet if nominated speaker, Ryan will find himself caught between "a president who doesn't want to do anything" in terms of negotiating with Republicans and "unrealistic expectations among the base of the Republican Party," Nunes said.

Adam Schiff, D-California, called Ryan "a very bright guy and somebody we can work with." However, he warned that Ryan will "confront, frankly, many of the same challenges that John Boehner did."

Ryan needs to get the GOP conference behind certain must-do agenda items like raising the debt ceiling, Schiff said. "We need a speaker who can deliver his own members."

Nunes agreed that the debt ceiling "has to be raised."

"This is a country, we have to pay our bills," he said. At the same time, he added, "The American people expect the budget to be balanced."