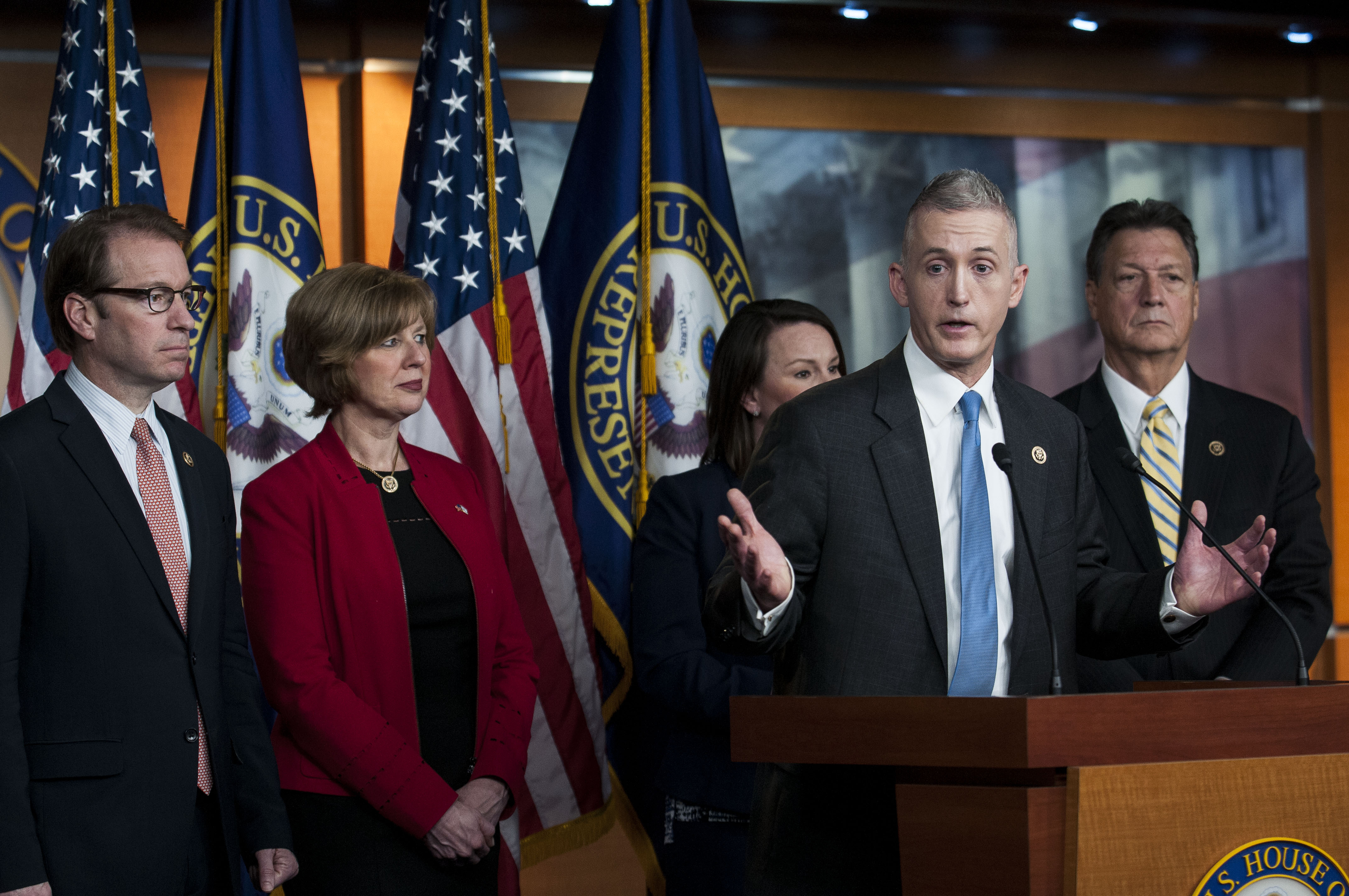 WASHINGTON Republicans on the House Benghazi Committee are faulting the Obama administration Tuesday in a report on the deadly 2012 attacks in Benghazi, Libya.

The roughly 800-page report, broken into five parts, describes the event, government communications about the attacks, and events leading up to the attacks in Benghazi. There is a section devoted to compliance with congressional investigations, and the last part has the committee's recommendations.

Clinton was secretary of state during the attacks, which killed four Americans, including U.S. Ambassador Chris Stevens. She testified before the congressional panel last October in marathon 11-hour hearing.

"There are only three assets that ever made it to Benghazi: two unarmed drones and the team from Tripoli that deployed themselves," Gowdy said at a press conference Tuesday morning on Capitol Hill. "Washington had access to real-time information, but that real-time information did not inform and instruct the decisions made in Washington."

Gowdy said the report captures "two different images" of what was happening in Benghazi in the lead-up to and during the 2012 attack and the image of the decisions made back in Washington by Obama administration officials.

Speaker Paul Ryan, R-Wisconsin, released a video statement Tuesday about the report, saying that it contains a significant amount of new information and is based on interviews with more than 100 witnesses, including more than 80 who had not been questioned by lawmakers before.

"It makes clear that officials in Washington failed our men and women on the ground when they were in need of help. And the report makes key recommendations for how we can prevent such a tragedy from happening again," Ryan said.

The State Department denied the committee's claim that diplomats' concerned about sending uniformed Marines to Libya caused a delay in military deployment.

"The fact is, we did not cause a delay. We received diplomatic clearance, as is standard, to send a flight into Tripoli to evacuate our personnel. The process of gaining clearance did not delay or cancel any asset going to Libya," State Department Dep. Spokesman Mark Toner said in a statement. Furthermore, we deployed a Marine FAST team to Tripoli after the attacks. Concerns about what they wore had no bearing on the timing of their arrival."

Democrats released a report Monday which said that while the State Department's security measures in Benghazi the night of Sept. 11, 2012 were "woefully inadequate," Clinton never personally turned down a request for additional security at the U.S. outpost in Benghazi. Democrats said the military could not have done anything differently that night to save the lives of four Americans.

Their report also said that no witness interviewed by the committee substantiated claims that Clinton ordered the military to stand down on the night of the attack.

The dueling reports highlighted the partisanship of the inquiry, which has been marked by finger-pointing on both sides.

On Tuesday, the panel's Democrats denounced the Republicans' report as "a conspiracy theory on steroids - bringing back long-debunked allegations with no credible evidence whatsoever." The statement added: "Republicans promised a process and report that was fair and bipartisan, but this is exactly the opposite."

They also accused Republicans of leaking the report in the middle of the night to bury their findings.

"There is a reason Republicans leaked pieces of their report in the middle of the night and continue to hide it from Democrats even now -- they don't want us to fact check it against the evidence we obtained," they added.

Last month, Democrats on the panel slammed the committee's investigation as a $7 million "partisan charade."

The State Department also issued a statement before the report's unveiling, saying that the "essential facts surrounding the 2012 attacks in Benghazi have been known for some time," and have been the subject of numerous reviews including that by an independent review board.

"We have made great progress towards making our posts safer since 2012," the statement said.