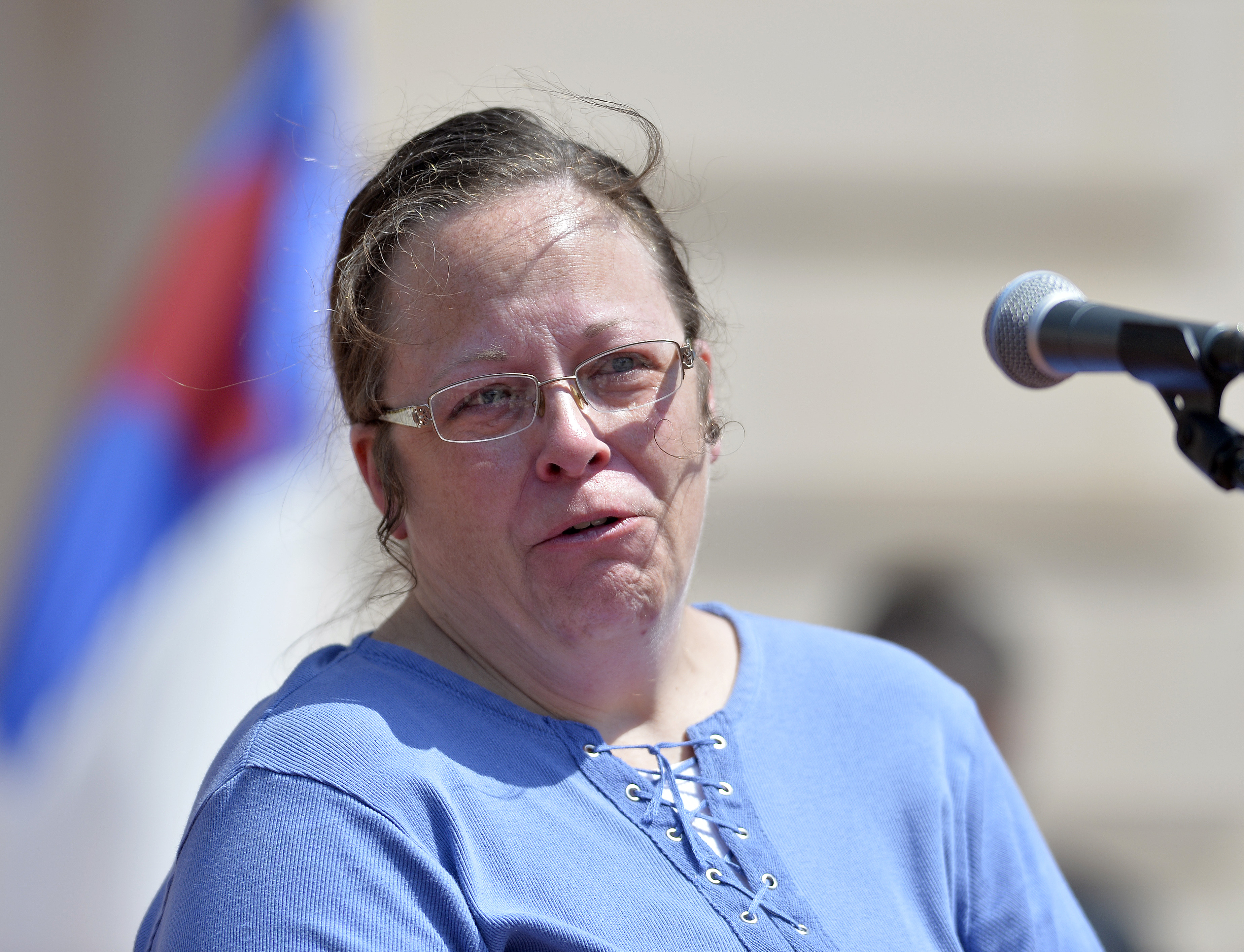 Kentucky Sen. Rand Paul offered some words of support Tuesday for Kim Davis, the county clerk in his home state who has invoked "God's authority" to deny marriage licenses to gay couples in defiance of the Supreme Court.

"I think people who do stand up and are making a stand to say that they believe in something is an important part of the American way," Paul, who's running for president in 2016, told Boston Herald Radio during a campaign trip to the Northeast.

Paul added that while he believes marriage is the union of one man and one woman, he also believes same-sex couples ought to be able to enter into a legal contract - and that the government should get out of the marriage business altogether.

"I think one way to get around the whole idea of what the Supreme Court is forcing on the states is for states just to get out of the business of giving out licenses. Alabama has already voted to do this, they're just no longer going to give out licenses. And anybody can make a contract. And then if you want a marriage contract you go to a church. And so I've often said we could have gotten around all of this also in the sense that I do believe everybody has a right to a contract," Paul said.

One of Paul's competitors for the GOP nomination, former Hewlett-Packard CEO Carly Fiorina, told radio host Hugh Hewitt on Tuesday that it's "not appropriate" for Davis to continue denying licenses to same-sex couples, given the court's ruling.

"While I disagree with this court's decision, their actions are clear," Fiorina explained. "And so I think in this particular case, this woman now needs to make a decision that's [about] conscience: Is she prepared to continue to work for the government, be paid for by the government, in which case she needs to execute the government's will, or does she feel so strongly about this that she wants to sever her employment with the government and go seek employment elsewhere where her religious liberties would be paramount over her duties as a government employee?"

Hewitt asked Fiorina whether she'd advise Davis to continue her "civil disobedience," and the candidate responded, "Given the role that she's playing, given the fact that the government is paying her salary, I think that is not appropriate."

"Now that's my personal opinion," she continued. "Others may disagree with that, but I think it's a very different situation for her than someone in a hospital who's asked to perform an abortion or someone at a florist who's asked to serve a gay wedding. I think when you're a government employee, you are put into a different position honestly."

New Jersey Gov. Chris Christie sounded a similar note during an interview Wednesday with radio host Laura Ingraham. "What I've said before is for someone who works in the government has a bit of a different obligation than someone who's in the private sector or obviously working for educational institutions that's religiously based or others," he explained, "but my point is we have to protect religious liberty and people's ability to be able to practice their religion freely and openly, and of course we have to enforce the law too."

In his own appearance on Hewitt's show on Tuesday, South Carolina Sen. Lindsey Graham, another 2016 GOP candidate, was even more succinct.

"As a public official, comply with the law or resign," Graham advised Davis. "The rule of law is the rule of law. That's what we are. We are a rule of law nation, and I appreciate her conviction. I support traditional marriage, but she's accepted a job where she has to apply the law to everyone. And that's her choice."

Davis, the elected clerk of Rowan County, Kentucky, has refused to issue marriage licenses to gay couples since a Supreme Court ruling in June legalized same-sex marriage nationwide, despite multiple court orders that she do so.

Davis will appear before a federal judge on Tuesday, where she may be held in contempt of court and could face financial penalties or even possibly jail time.