WHARTON STATE FOREST, N.J. (CBS) -- Crews are fighting fire with fire as they work to contain a massive wildfire at Wharton State Forest in Burlington and Atlantic Counties. The fire began around 10 a.m. Sunday in Burlington County and has reached 13,500 acres in size as of Tuesday, the New Jersey Forest Fire Service said.

"I saw the smoke kinda rising and turning like an orange color. It looked like a scene from a movie like the end of the world type thing," Shamong resident Andrew Schmehl said.

Thick plumes of smoke were seen billowing in the air in South Jersey Monday.

Crews escorted Eyewitness News back into the forest to give a closer look at the firefight. At one point, the fire was just moments away from destroying Paradise Lakes Campground.

Owner Scott Miller says he got the terrifying phone call.

"And say, 'Listen, we have a major fire. It's headed your way and can you get your people out?'" Miller said.

Miller endlessly thanked crews for saving his life and business.

"It's scary because we could have been trapped if it jumped there but these guys held it off. We owe Forest Fire the biggest thanks in the world," he said.

The effort to control it hasn't been an easy one.

Crews say the fire was fueled by the wind and has been burning in a remote area that's hard to access.

"So now we have to worry about trees falling on the road and worst yet, falling on our staff that are working. So the hazards certainly increase in the evening," Miller said.

New Jersey Forest Fire Service Chief Greg McLaughlin says crews are using an indirect approach to battle the wildfire by burning out all the vegetation around the fire so it cannot spread any further in all directions.

"Conditions were dangerous and the fuels were dry and we had to step back and use an indirect attack to be able to contain the fire," Incident commander John Earlin Jr. said.

The fire has impacted land in Washington, Shamong, Hammonton and Mullica Townships, which are in Burlington and Atlantic Counties. 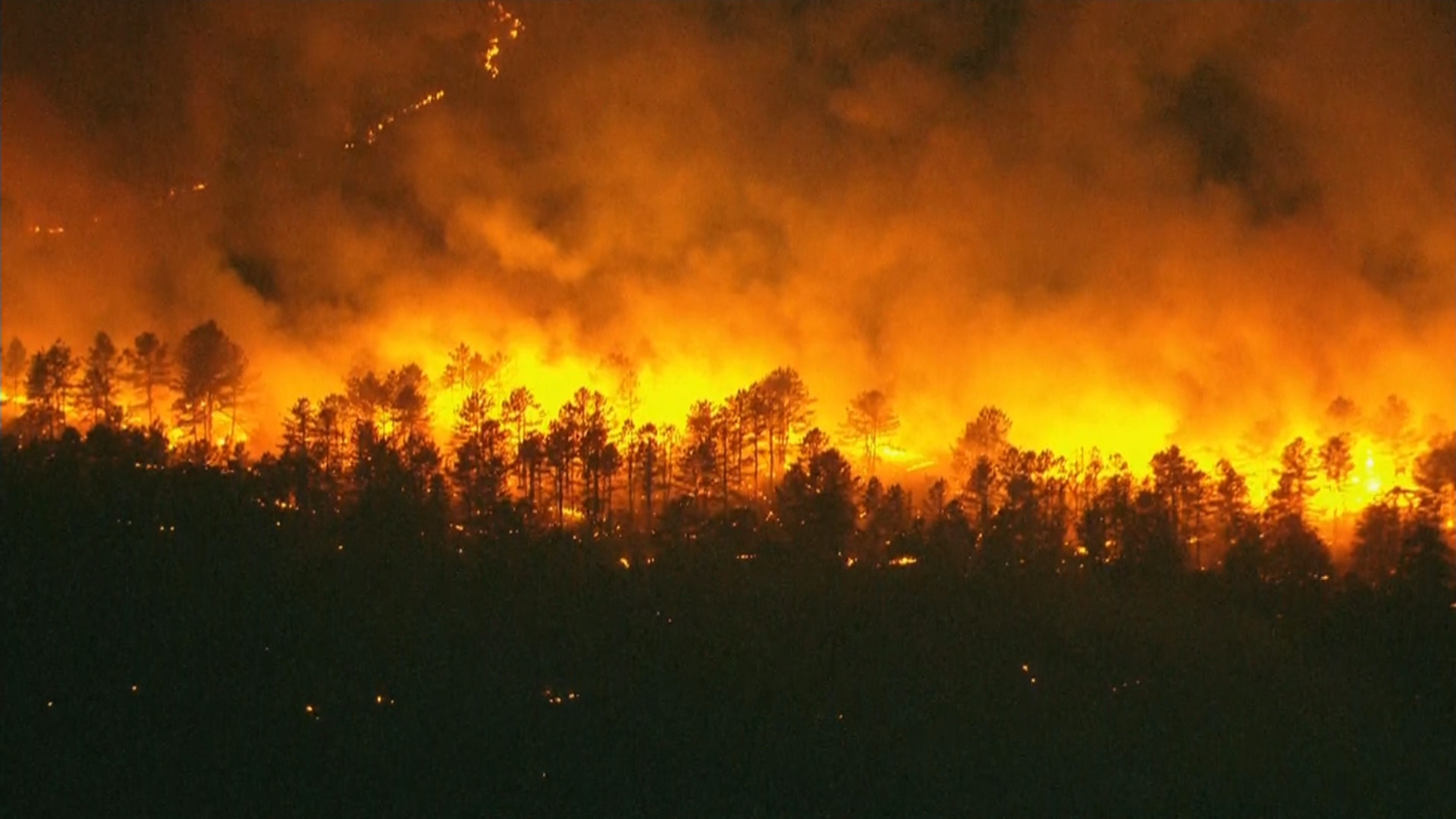 McLaughlin says as crews worked through the afternoon and evening to contain the fire on Sunday, but when the wind shifted it pushed the fire east of the Mullica River and then again west of the river.

"This caused us to regroup again and reassess the situation to move our containment lines out to a larger area and this is why you see the fire continue to grow in size," McLaughlin said.

With acres and acres burning and hours and hours of hard work, crews are asking for patience as this has become the largest wildfire in New Jersey since 2007.

The Division of Fire Safety is assisting in the investigation into the cause of the fire, but McLaughlin says they have "essentially ruled out natural causes."

"The majority of our forest fires are human-caused," Shawn M. LaTourette, New Jersey's Commissioner of Environmental Protection, said. "Legal campfires, campfires that are not fully extinguished continue to pose a great risk.

These closures will remain in effect until further notice.

Route 206, from Chew Road to Atsion Road, and Route 542, Green Bank Road to Columbia Road, were closed but have since reopened.

Meanwhile, Pinelands Adventures has suspended kayak and canoe trips. Crews are also working to protect 18 structures within the containment area including private and state campgrounds and some buildings on a cranberry and blueberry farm.

Motorists traveling in the area are warned to remain cautious for smoke and watch for firefighters and fire vehicles that may be working on the roadways.

A total of 50 people have been evacuated from campgrounds and other surrounding areas. Jeremy Savo, an organizer of a music festival called Beardfest is among the evacuees.

"Right now, we have stages and sound systems, tents, someone's car, an RV like thousands of dollars of music equipment, it's all there, we can't get in. Our team is just standing by. We all just went out to brunch, just waiting to see what happens because we still have to clean up the festival," Savo said. 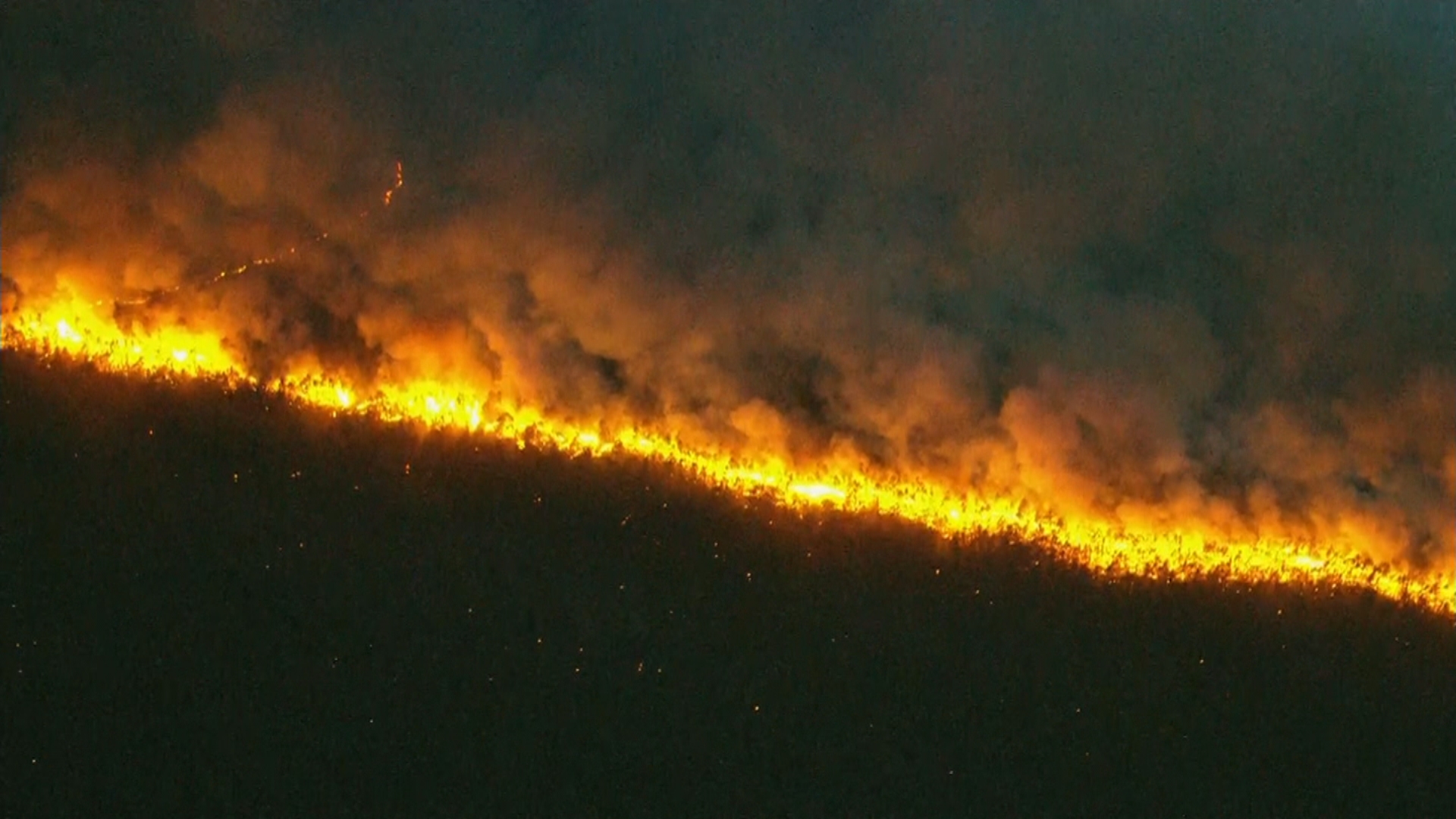 Wildfires aren't uncommon in New Jersey, but this is a large one as the Garden State averages approximately 7,000 acres burned per year in wildfires, according to the National Weather Service.

People as far away as Galloway Township, which is 22 miles away, reported seeing smoke from the wildfire and ash falling on their cars.

On Monday, officials said approximately 60 firefighters are fighting the blaze.

There are no reports of any injuries at this time.

CBS3's Madeleine Wright and Kerri Corrado contributed to this report.