PHILADELPHIA (CBS) -- Trudy Haynes was a trailblazer in the journalism industry and a longtime fixture here at Eyewitness News. She worked at KYW for more than 30 years, and she was Philadelphia's first Black TV reporter. Haynes died on Tuesday. She was 95 years old.

Haynes joined Eyewitness News in 1965, becoming the first Black TV reporter in Philly. At times, she faced sexism and discrimination, but she always rose above it, and she gained their respect. She quickly became a standout, interviewing the likes of Martin Luther King, President Lyndon Johnson and Muhammed Ali. She truly made a name for herself despite the racism and sexism she faced as a Black woman in the industry.

During Black History Month in 2021, Haynes told CBS3 that getting into the business was an accident that started with her introducing herself to a news manager scouting for talent. It was 1963 when Haynes got her first TV gig as the first Black weather reporter at a station in Detroit.

In 1999, Haynes was inducted into the Philadelphia Broadcast Pioneers Hall of Fame. Those who worked with her over the years at KYW-TV and in the community say she left her mark on the region and the industry.

The passing of Haynes is an immeasurable loss. For those who knew her and worked with her, their recollection of the broadcast pioneer is vivid.

CBS anchor Ukee Washington said, "My heart is heavy right now. It is also filled with a deep love and incredible respect for Ms. Trudy Haynes. She will always be my hero. I, like so many, stood on the shoulders of greatness. A pioneer who was fearless, courageous, extraordinarily gifted and blessed. So talented and personable on the air and off. If she didn't know your name, she affectionately called you dah'lin. We will never forget her name and everything this trailblazer accomplished and stood for. Thank you dah'lin from the bottom of this heavy heart. Now rest well after a job well one." 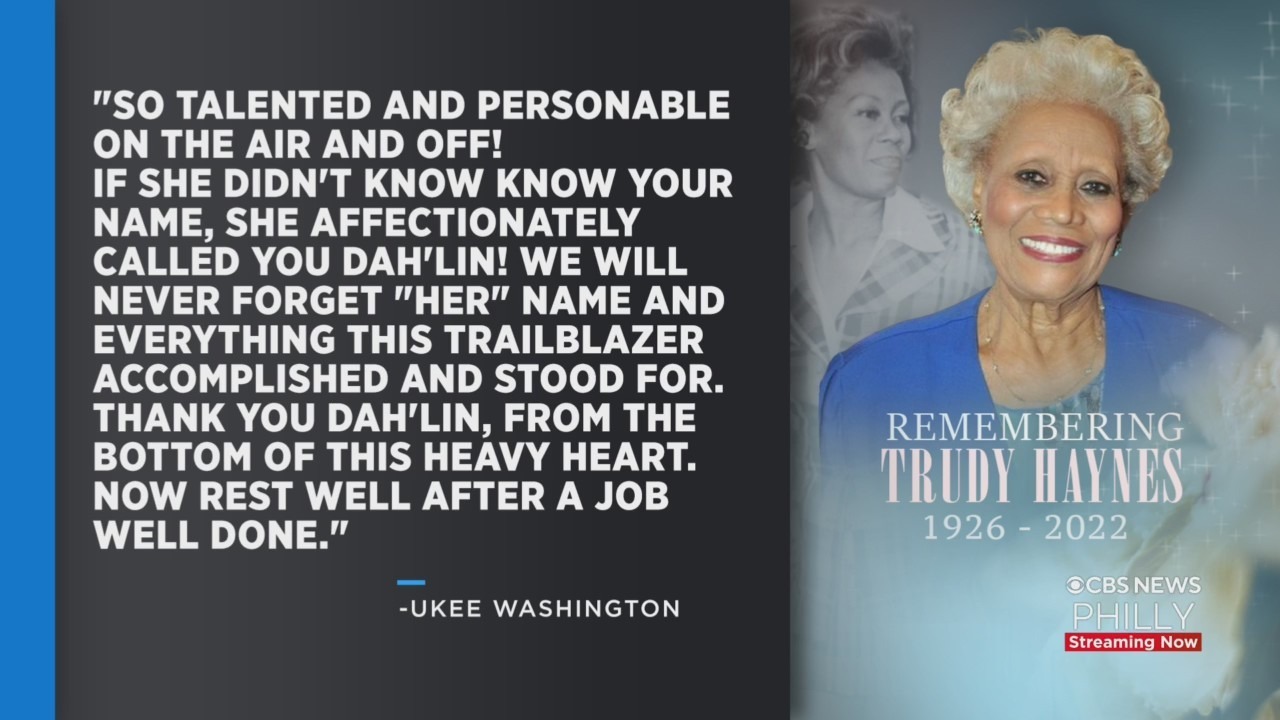 Former CBS3 anchor Pat Ciarrocchi remembers being awestruck by Haynes's presence, long before she began working alongside her.

"I had actually 'met her' watching her on television as a little girl in Chester County," Ciarrocchi said. "When I walked into the newsroom my first day in 1982, she was one of the first to meet me and she greeted me with such graciousness and warmth, and I could barely speak. Why? Because I was standing in front of Trudy Haynes."

That unforgettable aura would come to define Haynes, who became an advocate for civil rights, women's rights and underserved communities. She was also a woman with an impeccable style.

"She is on our Wall of Fame. Trudy was a fashion icon too," Ciarrocchi said.

"We honored her this past April for our Women of Excellence luncheon and I handed her the mic," Jackson said. "And she had such encouraging words for those women who are coming into the business right now. Standing in front of her, it brought me to tears."

Former news anchor Larry Kane met Haynes when they were street reporters at competing stations in 1966. Kane later worked alongside her at Channel 3. He recalls that same barrier-breaking presence that would become part of Haynes's lasting legacy.

CBS3 is partnered with the Philadelphia Association of Black Journalists to award the annual Trudy Haynes Scholarship to a college student pursuing a career in journalism or communications. Ernest Owens, president of the Philadelphia Association of Black Journalists, says Haynes "broke barriers for Black journalists, women and anyone who dreamed they could make it."

"The Philadelphia Association of Black Journalists is celebrating the trailblazing life and legacy of Trudy Haynes. At 95 years old, Trudy lived a life that broke barriers for Black journalists, women and anyone who dreamed they could make it," Owens said. "She made history that not only charged the media industry in Philadelphia but ushered in a new generation of diverse journalists in America. We will continue to remember her for being the ultimate game-changer and making a lifelong commitment to mentor, give and inspire those behind her. Our sincerest condolences to her close family and friends. She will truly be missed."

Philadelphia City Council President Darrell L. Clarke said when Haynes came to cover the news at City Council later in her career, it was "like having a celebrity in the room."

"Trudy Haynes was a courageous trailblazer and the first Black woman on local television news in Philadelphia," Clarke said. "We took great pride in her accomplishments and her reporting. Later in her career, she would come to City Council to cover the news, and having Trudy in Council was like having a celebrity in the room. She will be profoundly missed. Rest in Power, Trudy."

CBS3's Janelle Burrell and Natasha Brown contributed to this report.