The Mexican specialty isn't hard to come by in New York City - but we've weeded through the imitators to bring you our picks for the best guacamole in town. By Valerie Stivers.

The elegant East Midtown location is where office-job Manhattanites hide out for long, boozy lunches. The main courses can be hit or miss, but a tableside preparation of guacamole in a giant mortar steals the show.

Purists might scoff, but these party-friendly downtown joints serve a variety of creative guacs such as a chipotle variation with pineapple, a camote with cinnamon-spiced sweet potato and a dusting of toasted pumpkin seeds, and a spicy mole with plantain. Menus vary between the three venues.

Rosa Mexicano's three large, colorful New York locations are known for their theatrical, tableside preparation of the green gold. First your server grinds onion, chilis and cilantro in the traditional stone mortar and pestle (molcajete), then tosses the spicy paste with cubes of fresh avocado. 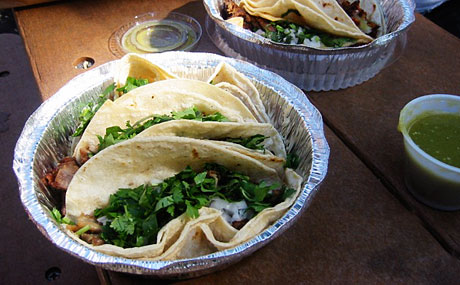 This small, cheap, cult taco joint hidden in the back of a Mexican bodega has little in the way of ambiance (paper decorations, mirrored walls) but fans freak out for the authentic Mexican cuisine, served on paper plates. The traditional, guacamole gets especially enthusiastic raves.

This high-class nuevo Mexicana eatery does a three-guac tasting. There's the traditional, mild cilantro-spiked version, a frutas variation with pomegranate, peach and Thai basil, and a spicy chipolte-infused rojo. Tasters say it's the best in the city.

Sometime in the mid-2000s it seemed like every third storefront in Manhattan became a Chipotle. This is good news for guacamole fanatics, because the dense, creamy tomato-flecked spread is arguably one of the best in the city, and comes with plenty of lime-salt–dusted chips.