Fifty homeruns in a season!

It used to be a barrier. From 1920 up through the beginning of the 1990 season, it had been accomplished only seventeen times by ten hitters. In a sense, it was The Holy Grail for power hitters. Jimmie Foxx, Hank Greenberg, Willie Mays, Mickey Mantle and, of course, Babe Ruth, were among a select few who personified power, validating themselves as great sluggers when they reached the magical half-century mark in homeruns (HR).

When Detroit Tiger Cecil Fielder smashed 51 HR in 1990, it marked the first time in thirteen years that anyone hit that golden mark. However, beginning in 1995 and continuing on through this season, the so-barrier was virtually trivialized, having been reached no less than two dozen times within that sixteen year stretch. In fact, Toronto's Jose Bautista was the most recent slugger to perform the feat, hitting 54 HR this very year.

In this episode of By The Numbers we will try to contextualize this feat by attempting to assign a "degree of difficulty" to hitting fifty homeruns.

In CHART 1 below, the reader will find a list of every season in which at least one player smashed fifty or more circuit clouts. We also provide the total number of homeruns hit in the Major Leagues (MLHR) that year and the total number of at-bats (MLAB). In the last column, we compute the statistic known as the Major League Homerun Ratio (MLHRR).

For example, in 1955, Hall of Famer Willie Mays slugged 51 HR, while the then sixteen teams in the Major Leagues hit a combined total of 2224 HR. Since the total number of at-bats for these sixteen clubs was 83590, the MLHRR was 0.02661 for that year because

How can MLHRR be interpreted or applied? Since it is a ratio, we can think of it as the number of HR per AB. To make more sense of this, let us assume that an "average" 1955 player had 500 AB, then his "expected" HR total would have been about 13 (actually 13.3), a figure which is obtained by simply multiplying 500 with 0.02661. 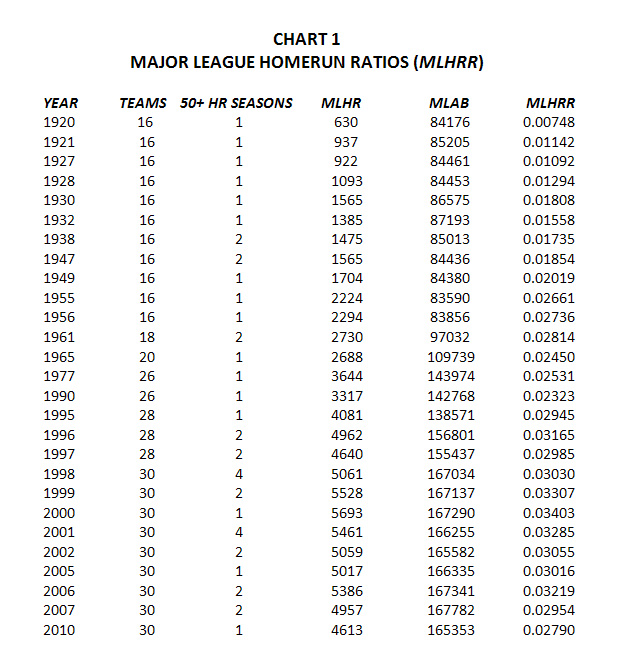 To find out how Mays' 51 HR compared with his contemporaries that year, it is helpful to compute what we will call his Individual Homerun Ratio (IHRR). In CHART 2 below, we list every hitter who clouted fifty or more HR, their corresponding AB, and their IHRR, which is nothing more than the ratio of HR to AB. So, for example, since Mays batted 580 times in 1955, his IHRR is computed to be 0.08793. That is, 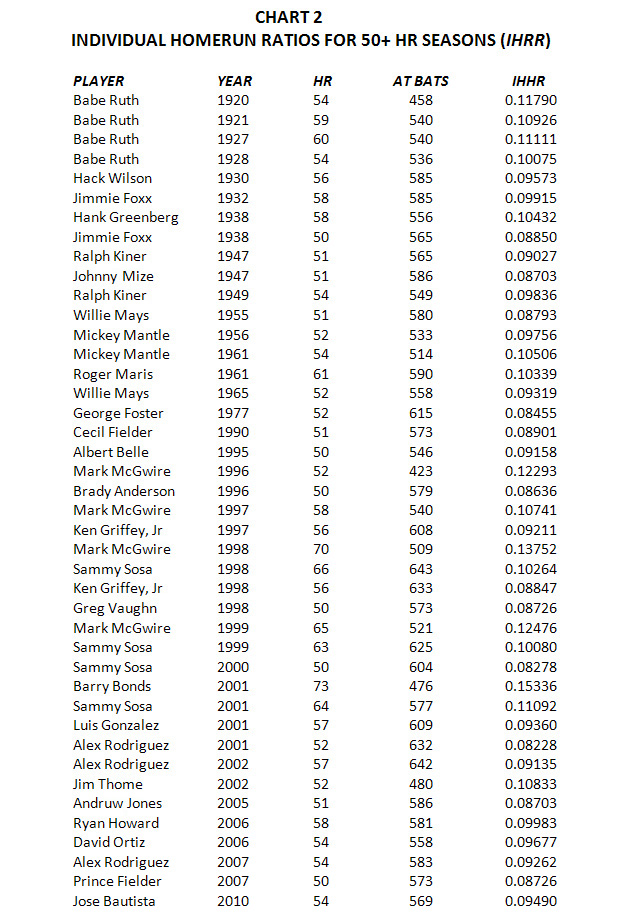 We can now put this feat in a "relative" context, addressing the question of the degree of difficulty. Continuing with the Say Hey Kid in 1955, when we compare his IHRR with the corresponding MLHRR, we derive a metric which we can call the Relative Homerun Ratio (RHRR). This measure is calculated by simply dividing the former by the latter. That is,

How can this figure of 3.304 be interpreted? One way we can look at it is as a "degree of difficulty". In other words, Mays was 3.304 "times as good" as the "average" HR hitter in 1955. From this perspective, we can say that he had to be "more than three times as good as the average player" to hit 51 HR that year.

We can now use this RHRR statistic to put the 50+ HR season into a context which will "level the playing field". So, how difficult was Roger Maris' 61 HR in 1961? And, how did Mark McGwire and Sammy Sosa measure up in their Homerun Derby season of 1998? And what about HR king Barry Bonds in 2001? Please see CHART 3 below. 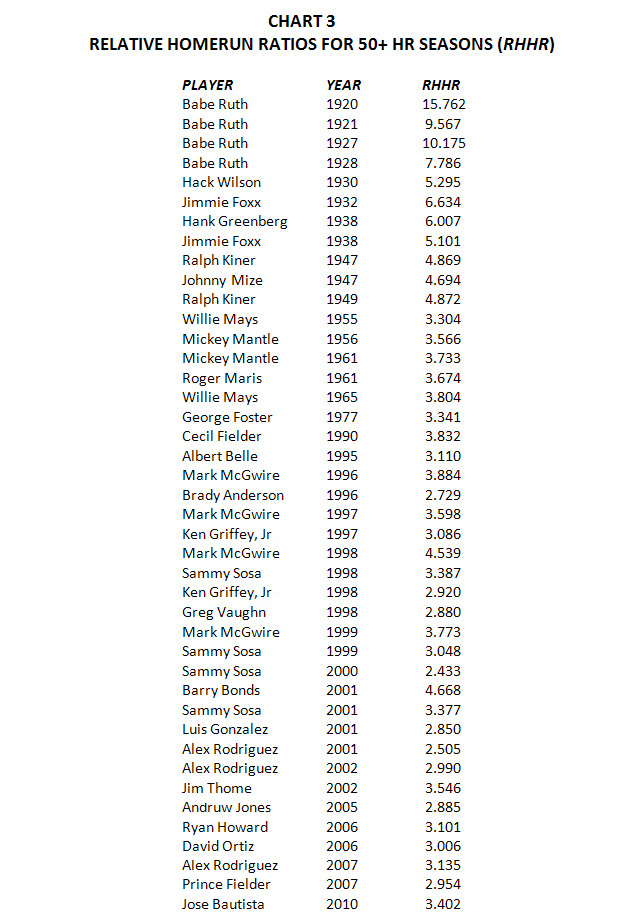 Bottom Line: There are certainly other ways to look at this question. But some of the numbers do jump out from this chart…especially the ones at the top.