Manny Pacquiao is one of the most celebrated boxers of his generation and has long been one of the world’s premier pound-for pound prizefighters. The 36-year-old Pacquiao (57-5-2, 38 KOs), an eight-division titleholder who the Boxing Writers Association of America named the “Fighter of the Decade for the 2000s," has conquered many worthy adversaries. Here are five of Pacquiao’s five greatest triumphs as a professional.

Pacquiao (49-3-2, 37 KOs) rendered the 31-year-old Hatton (45-2, 32 KOs) unconscious in the second round to seize the IBO World Super Lightweight title at the MGM Grand in Las Vegas, Nevada. Hatton, a 2-1 underdog, aggressively stormed out of his corner to attack Pacquiao. Unfortunately for “The Hitman,” Pacquiao easily countered and twice floored Hatton in the opening minutes. The speedy southpaw finished Hatton with a vicious left hook to the jaw at two minutes and 59 seconds of the decisive frame.

"I didn't think it would be so easy, but I worked hard since the beginning of March in training camp,” said Pacquiao, 31. “He was open for the right hook. I knew he'd be looking for the left. This was nothing personal. I was just doing my job.”

Pacquiao (48-3-2, 36 KOs) caused the 35-year-old De La Hoya (39-6, 30 KOs) to quit on his stool following the eighth round at the MGM Grand in Las Vegas. Despite yielding four inches, the 5-foot-7 Pacquiao used his vastly superior quickness to bruise, batter and utterly overwhelm the 5-foot-11 De La Hoya.

"I hit him with a lot of punches in the last few rounds," said Pacquiao, 29. "I didn't think he could last long." 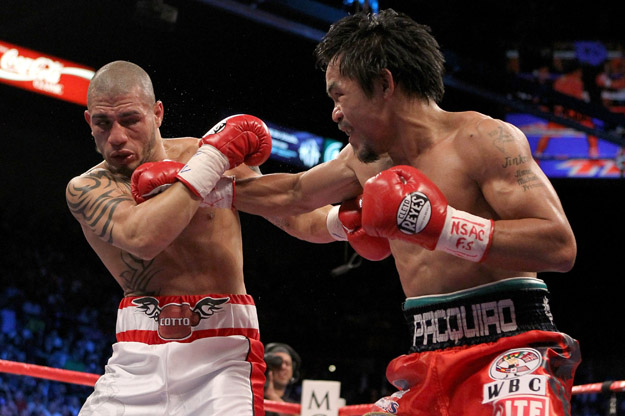 Meeting at a catchweight of 145 pounds, the 31-year-old Pacquiao (50-3-2, 38 KOs) mercilessly pounded the 29-year-old Cotto (34-2, 27 KOs) to earn the WBO welterweight crown in “Sin City.” Pacquiao floored a bloodied Cotto in the third and fourth and had the Puerto Rican icon pinned against the ropes in the 12th. Referee Kenny Bayless compassionately halted the mismatch 55 seconds into the final round. “The Fighting Pride of the Philippines” collected a seventh title in a seventh weight class with this brutal triumph.

Get the latest on the Mayweather-Pacquiao fight.

Morales (48-4) and the 28-year-old Pacquiao (42-3-2) met in the finale of their memorable trilogy at the Thomas & Mack Center in Vegas. Pacquiao fought possessed, effortlessly landed blistering combinations and grounded Morales on three occasions. The slugging Filipino officially finished Morales at two minutes, 57 seconds of the third round.

“For the first time in my career, I actually felt the power of an opponent like I’ve never felt it before,” said Morales, 30. “I was hurt by the power of his punches, and maybe it’s time to think about not doing this anymore. I had a great career.”

Clashing at a catchweight of 150 pounds, the 32-year-old Pacquiao (52-3-2, 38 KOs) grotesquely defaced Margarito (38-7, 27 KOs) to win a unanimous decision at Cowboys Stadium in Arlington, Texas. Although significantly smaller, the 5-foot-7 Pacquiao trumped the 5-foot-11 Margarito by counts of 120-108, 119-109, and 118-110. Pacquiao brutalized Margarito from the outset and landed nearly 500 strikes. The Filipino fractured Margarito’s right orbital bone and sliced open the Mexican’s right cheek and right eyebrow.

“I would like to congratulate Manny Pacquiao for his win on Saturday night,” said Margarito, 32, who was previously caught trying to kill Miguel Cotto and Shane Mosley with cement fists. “It was a tough and difficult fight for me and I hope the fans enjoyed our battle at Cowboys Stadium.”