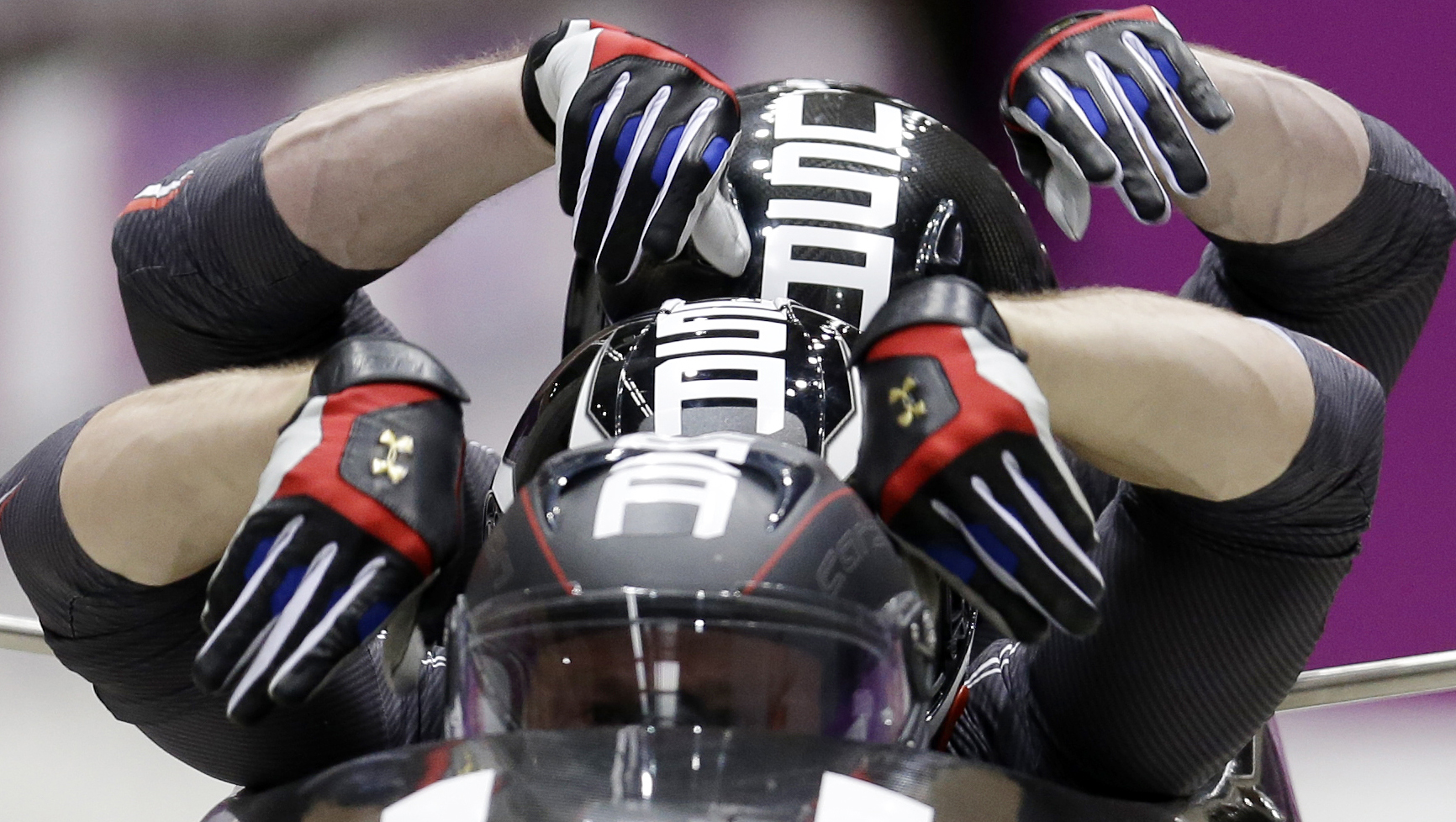 KRASNAYA POLYANA, Russia - Alexander Zubkov has company in his pursuit of Olympic history.

More than the Russian probably expected.

Definitely more than he wanted.

Trying to become the sixth driver to win two bobsled gold medals in the same games, Zubkov has a narrow lead over Latvia's Oskars Melbardis, defending gold medalist Steven Holcomb in USA-1 and Germany's Maximilian Arndt after the first two runs of the four-man competition, shaping up to be a sled-to-sled battle between the world's fastest drivers on ice.

So before the cauldron in Sochi goes dark Sunday night, there's some drama left to be settled on the bobsled track.

"There's a lot of good teams out here," said Holcomb, who wasn't slowed by a nagging calf injury. "I knew it was going to be a battle like this."

The favorite after dominating the two-man event, the 39-year-old Zubkov and his crew completed their two runs down the Sanki Sliding Center track on Saturday in 1 minute, 50.19 seconds - 0.04 seconds ahead of Melbardis, who jumped three sleds with a blistering second run.

Holcomb, who couldn't catch Zubkov in two-man and settled for bronze, is fourth, 0.17 seconds behind Zubkov. Arndt in Germany-1 is third, 0.16 seconds back.

The 0.17-second gap between first and fourth place is the closest through two runs in Olympic history, topping the 0.23-second space between the four top challengers at Albertville in 1992.

With two runs left on Sunday, the gold is very much up for grabs.

"I knew it was going to be hard to be first," Holcomb said. "Coming down and having that pretty good lead going into that second heat, ahead of the Latvians, it shows anybody can have a good run and move right up. We're only 17-hundreths out of a gold medal and that can be made up in two runs, easily."

If Zubkov is feeling any pressure to win Russia's first gold in four-man and put an exclamation point on the Sochi Games for the host nation, he's not showing it - at least not in his sled.

But after his two runs, Zubkov was somewhat tense and a little irritated by a crash involving Canada-3, which came shortly before the leading sleds began their second runs.

"The Canadians spoiled the track," Zubkov snapped. "That's why the top teams are struggling."

Canadian driver Justin Kripps' wreck didn't bother Melbardis, who posted a time of 55.13 on his second run to move ahead of Arndt, Holcomb and Germany's Thomas Florschuetz. Melbardis won a World  Cup event here last year, and was viewed as a potential spoiler in four-man.

Chilled by the colder temperatures at night, the world's longest track was lightning fast for the 30-sled field. It challenged the drivers, who made their training runs during the day in much warmer weather and had to quickly adjust to maneuvering their 460-pound vehicles loaded with 800 pounds of passengers in unfamiliar conditions.

They'll resume racing in the daylight Sunday afternoon, when Russian President Vladimir Putin is expected to be in attendance to help Russian fans push Zubkov to gold.

Holcomb has become America's sledding streak buster. He snapped a 62-year gold medal drought by winning in four-man on Whistler's wild track four years ago, and ended another 62-year dry spell in two-man with Steve Langton.

Shortly after arriving in Russia, Holcomb, emboldened by his gold medal and past world championships, declared the Americans were "the team to beat" in these games. He meant it, and his comments fired up his teammates, although Curt Tomasevicz wasn't sure his driver should have been so cocky.

"Part of me is saying, 'Holcomb, shut up. You don't have to put any more pressure on us,'" he said. "That's how we feel. We had confidence in 2010 and the rest of the world didn't know that we were coming to wreck house. We have that same confidence this time."

Maybe so, but Zubkov, who has made several hundred more runs on Sanki's 17-curve course than any of the other drivers, set the tone with a track record on his first icy plunge. His 54.82-second trip bettered the mark Arndt and Germany-1 posted a few minutes earlier.

While Holcomb and Co. had the fastest start, and Arndt had the top speed, Zubkov found his way to the bottom of the track better than anyone else.

"Seventeen-hundredths over two runs, we can do that," said Langton, who also won gold in Vancouver. "We had two starts, well, 1½ great starts. Steve drove great and obviously the sled's running well. So 17-hundredths going into tomorrow for a gold medal, I'll take that any day."

Canada-3's scary crash came one day after the team's coaches decided to pull their top push athletes from driver Chris Spring in Canada-1 and put them in with Justin Kripps, who had better training times.

On the second run, Kripps flipped Canada-3 and he and brakemen Jesse Lumden, Cody Sorensen and Ben Coakwell slid through several turns with their helmeted heads digging into the ice. When they finally stopped, all four climbed out and did not appear injured as they walked to the finish area.

"I've been in some really bad crashes in my career and that one looked tough," said Spring, shaken by seeing his teammates in harm's way. "Rolling into a corner's always hard. Seeing the boys walk away was really reassuring."

Italy-1 raced with a new crew member after brakeman William Frullani was kicked out of the games after testing positive for a banned stimulant. Frullani was replaced in driver Simone Bertazzo's sled by Samuele Romanini.