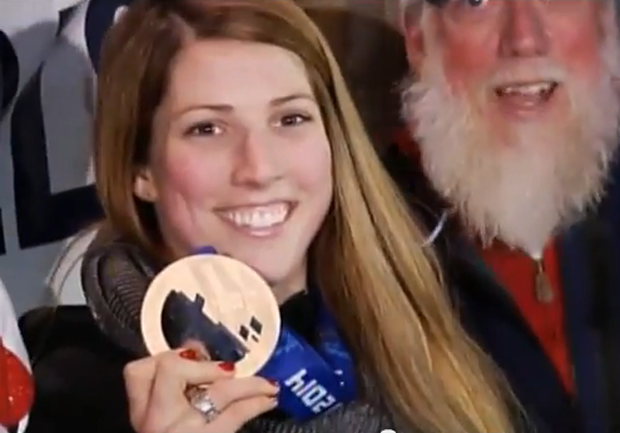 What a difference two weeks makes.

Earlier this month, Erin Hamlin was 5,200 miles away from home, racing down an icy track at 80 mph in a aerodynamic skinsuit on a hi-tech sled. Last night, she took a decidedly more relaxed route on a float through her hometown of Remsen, N.Y. as an Olympic hero - welcomed back as the first American ever to win a singles luge medal at the games.

The 27-year-old Hamlin won the bronze at the Sochi Olympics on Feb. 11 as ecstatic friends and family watched back home. "I'm from a very small town - not even 2,000 people," Hamlin told CBS News. "The entire central New York area has definitely embraced me and luge. I'm honored to be able to represent where I'm from and it will always be home. I'm really excited to bring this [medal] home, to share it with everybody because they've supported me since I was 12." On Thursday, a police escort and fire trucks guided Hamlin through cheering crowds lining Oneida County communities to her hometown. She was then honored with a parade that ended with a ceremony at Remsen Junior-Senior High School. On the golden anniversary of luge's 1964 debut at the Olympics, the Remsen native brought home the bronze medal with a confident, nothing-to-lose attitude. The historic moment was not lost on Hamlin, who was part of a U.S. sliding team that took home seven medals at the Sochi Games - more than any other nation.

"For me to get a medal for luge is huge because it's been so long that we've had a medal at all and we've never had a medal in singles so I think that it shows the work that's been put in and the dedication of the athletes," she said. "Hearing that the U.S. took the most sliding medals is the greatest thing ever."

Hamlin also credits the technology behind the U.S. sliders. Over a four-year period, Dow Chemical tested more than 20 material combinations as it sought to improve Team USA's luge times. Once the materials were narrowed down, the sled - and the athletes - underwent hours of wind tunnel testing to determine how air travels over the athletes at different points of the race.

"I think it definitely helped a lot," Hamlin said of the hi-tech sleds. "Obviously I still have to slide well ... but knowing that I'm on something new and something that I know is not slow is just a good feeling."

Hamlin now hopes to raise the exposure of luge and introduce her sport to youngsters in the U.S. - a tough sell considering there are only two luge tracks in the nation. But the athlete from the small town at the foot of the Adirondack Mountains thinks her bronze medal could have Olympic-sized appeal to would-be lugers.

"It's not the most popular sport in the world," she said. "I'm excited with this whole hardware thing, hopefully it will put it on the radar a little and make people more aware of it."