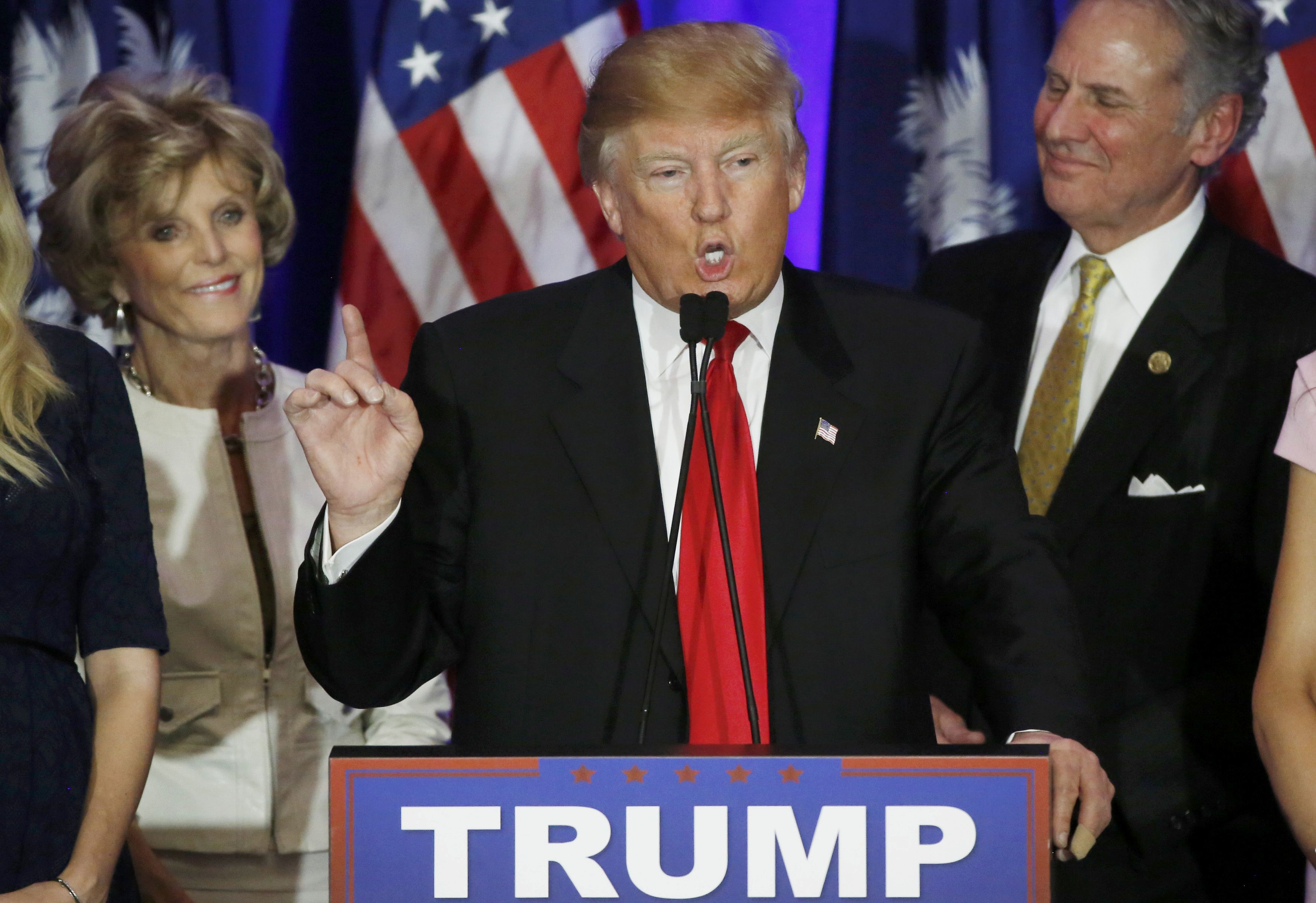 Donald Trump's first-place finish in the South Carolina primary Saturday night wasn't the 20-point blowout that some polls suggested, but he still finished 10 points ahead of his closest rivals.

It helped confirm that his nearly 20-point victory in New Hampshire the week before was no fluke. And the South Carolina victory shows he has three ingredients that will be key to success in the upcoming Republican Nevada caucus and Super Tuesday contests: Momentum, a powerful coalition of voters and the benefit of history.

Trump's back-to-back wins in South Carolina and New Hampshire helped wipe away any doubts that were sowed after he suffered a surprising loss to Texas Sen. Ted Cruz in the Iowa caucus. He won every single delegate the state has to offer, and the two double-digit victories left Trump the unequivocal frontrunner as Cruz and Florida Sen. Marco Rubio are left battling for the number two spot.

Davis noted that the upcoming primaries award delegates on a proportional basis, so "you can't do well with a certain constituency and hope that's enough to get you to 35 percent beat Donald Trump and collect up all the delegates which is more of a Ted Cruz strategy ."

"I'd say Ted Cruz with his vaunted organization that has won him Iowa and kept him alive in South Carolina is going to be much less valuable to the outcome going forward," he added.

And on "Face the Nation," USA Today's Susan Page noted that the proportional delegate allocation could keep the GOP contest a three-way race. But after March 14, states will begin awarding delegates on a winner-takes-all basis.

"Donald Trump with 35 percent of the vote could amass enough convention delegates to ensure his nomination," she said.

He's referring in part to Trump's decisive victory among the 46 percent of voters in South Carolina who do not have a college degree. Among that group, 41 percent supported Trump, compared with 27 percent for Cruz and 17 percent for Rubio.

College graduates, on the other hand, did not coalesce behind one candidate. The largest percentage, 27, voted for Rubio, but 25 percent voted for Trump and 20 percent for Cruz.

Several of the states that will vote on Super Tuesday have profiles similar to South Carolina, where just 26 percent of residents age 25 and over have bachelor's degrees. In eight of the 13 states that have a primary or caucus that day -- including delegate-rich Texas -- fewer than 30 percent of people over 25 have a bachelor's degree.

Then there are the evangelicals, the group of regular GOP voters that were supposed to help drive Cruz to victory. Trump ended up winning among white evangelicals, beating Cruz by five points among that group (32 to 27 percent).

"When you're looking at evangelical voters who go to church once a week, Cruz does very well with those voters," Reihan Salam, editor of "The National Review," said on "Face the Nation." But, he said, "If you look at people who identify as evangelical Christians but who are unchurched, those are the folks who are going to Trump. And that's a constituency no one else has been able to crack, including Marco Rubio."

"For Ted Cruz, the future really is now," Brownstein said. "The states that are coming up are the heavily evangelical, heavily blue collar states. Not only in the south, but in the Midwest. And if he cannot drive Donald Trump off of his beachhead that he's established, particular with blue collar evangelicals, which he's now won in both New Hampshire and in South Carolina, then you're looking at places like Alabama, Arkansas, Oklahoma, Tennessee, but also Missouri, Ohio, Michigan to some extent, Illinois to some extent, Wisconsin later in the Midwest."

"If Trump can hold those voters, there just isn't enough for Cruz," he concluded.

Brownstein said Cruz and Rubio have a "mirror image" problem when it comes to taking on Trump: Cruz's coalition is too narrow, and overly dependent upon evangelicals. Rubio's is too broad - he has "a little bit of everything" but isn't dominant among any group.

There's symbolic importance to Trump's win as well, given how successful South Carolina has typically been in picking the eventual Republican nominee. Since 1980, every single GOP nominee has won the state except former Massachusetts Gov. Mitt Romney, who lost to former House Speaker Newt Gingrich in 2012.

"I think history is on his side," Page said. "You wouldn't want to say that he's won it, but I think the nomination is now his to lose and we can't figure out a way in which he would manage to lose it given the things he's done that haven't even cost him," Page said. "He won South Carolina by ten points. He won New Hampshire by nearly 20 points. No Republican has ever won both those contests and failed to then get the nomination. And two of the three who did that won the White House."