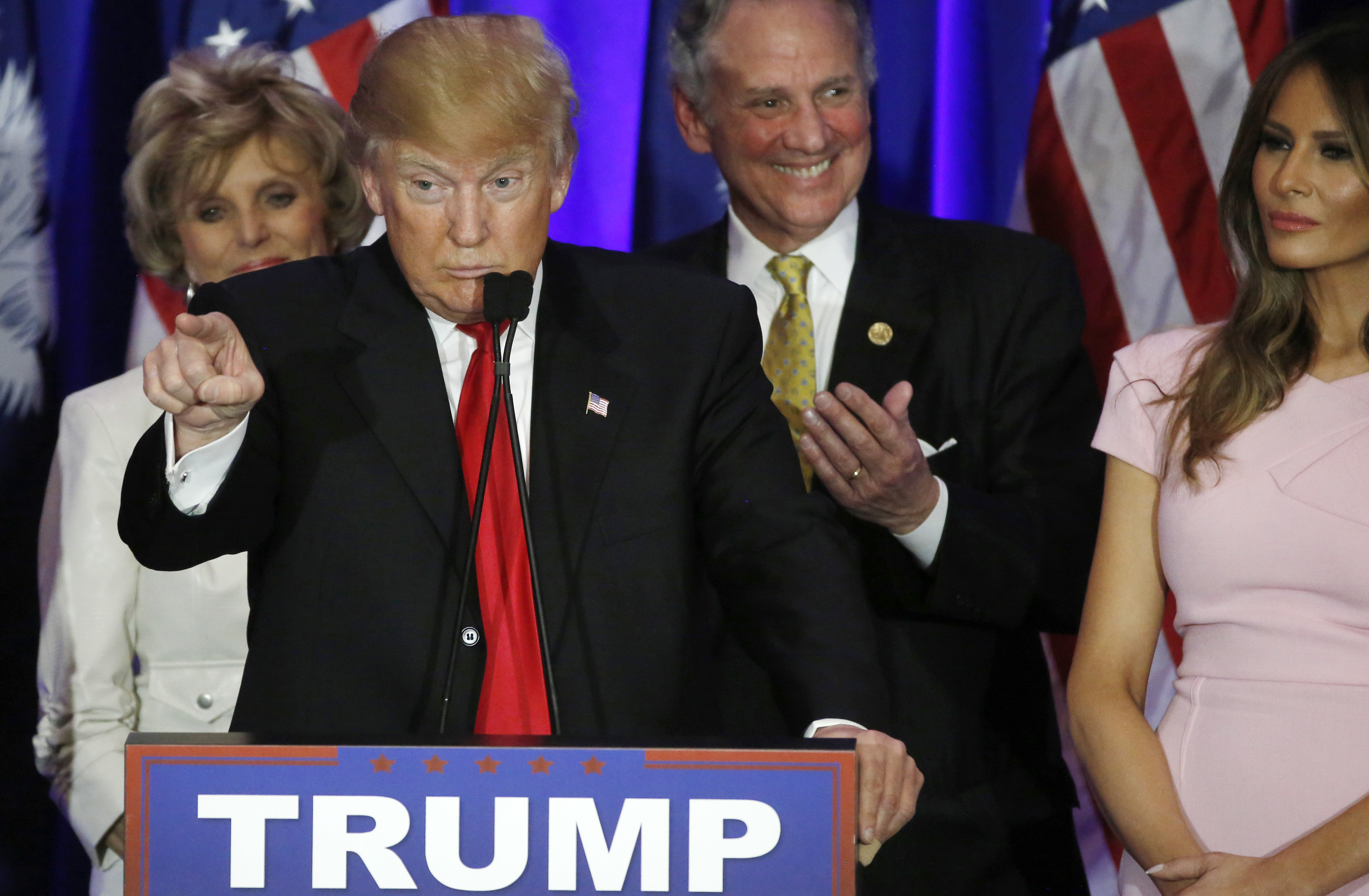 For the second time since the early-voting contests began, Donald Trump has trounced his competition. What's behind Donald Trump's double-digit primary win in South Carolina?

The South Carolina exit polls show four main reasons that Trump was victorious: he won several key demographic groups; he appealed to voters on issues they care about; he was able to tap into their anger at the establishment; and finally, he possesses the qualities many voters want in their next president.

Trump edged out his opponents in key demographic groups, winning 35 percent of men and 28 percent of women. Among men, Cruz won 24 percent and Rubio, 22 percent, and among women, Cruz and Rubio each attracted 24 percent support.

Older voters also liked Trump. Three quarters of those who turned out in the primary were 45 years of age or older, and among these voters, Trump won 33 percent, while Rubio and Cruz split, with 22 percent each.

Of the forty-six percent of voters without a college degree, 40 percent supported Trump, compared with 27 percent for Cruz and 17 percent for Rubio.

Cruz had been expected to do well with this group, but in the end, Trump edged him out 32 percent to 27 percent. Trump also did better than any of the other candidates with those voters who aren't evangelical or born-again. Twenty-nine percent of these voters chose Trump, compared with 22 percent who went with Rubio, 17 percent for Cruz and 16 percent who voted for Kasich.

More than eight in ten Republican primary voters identify as conservative, an increase since 2012, when conservatives made up 68 percent of the vote. Of those who define themselves as conservative, Trump won 31 percent, followed by Cruz with 27 percent and Rubio with 23 percent.

Veterans are an important part of the Republican electorate in South Carolina. On Saturday, 16 percent of the voters who turned out were veterans, in comparison with 21 percent who turned out in 2012. Throughout the campaign Trump has focused a good deal of attention on veterans' issues, and even held a fundraiser for vets in lieu of attending the Fox News GOP debate. That focus on veterans seemed to have paid off for Trump. Among these voters, he captured 35 percent of the vote, followed by Rubio, who got a quarter of the vote and Cruz who got 23 percent.

More than three out of ten South Carolina voters see terrorism as the most important issue facing the nation. Thirty-one percent of these voters picked Trump, followed by 25 percent for Cruz and 23 percent for Rubio.

Immigration is another issue which Trump has made a cornerstone of his campaign. While just 10 percent of South Carolina GOP primary voters described it as the most important issue facing the nation, among those who do, Trump won overwhelmingly, with 51 percent compared to Cruz 25 percent.

Trump also does very well with the almost three quarters of primary voters who support his idea for a temporary entry ban for non-American Muslims (41 percent for Trump, versus 23 percent Cruz and 20 percent Rubio). A larger percentage of voters said that illegal immigrants working in the U.S. should be offered a chance to apply for legal status -- 53 percent. Forty-four percent who support deportation. Among the more than four in ten who favor deportation Trump got 47 percent of the vote.

Trump also did well with voters who want an outsider. Among the 48 percent of voters who would prefer an outsider, Trump won an overwhelming capturing 68 percent.

Trump also won among those voters who feel they have been betrayed by their own party -- more than half of voters feel this way (52 percent). Of those, 36 percent voted for Trump, compared with 23 percent for Cruz and 19 percent for Rubio.

More South Carolina voters prefer a presidential candidate who shares their values (37 percent) and who can bring about change (31 percent), as opposed to a candidate who tells it like it is (16 percent) or can win in November (15 percent).