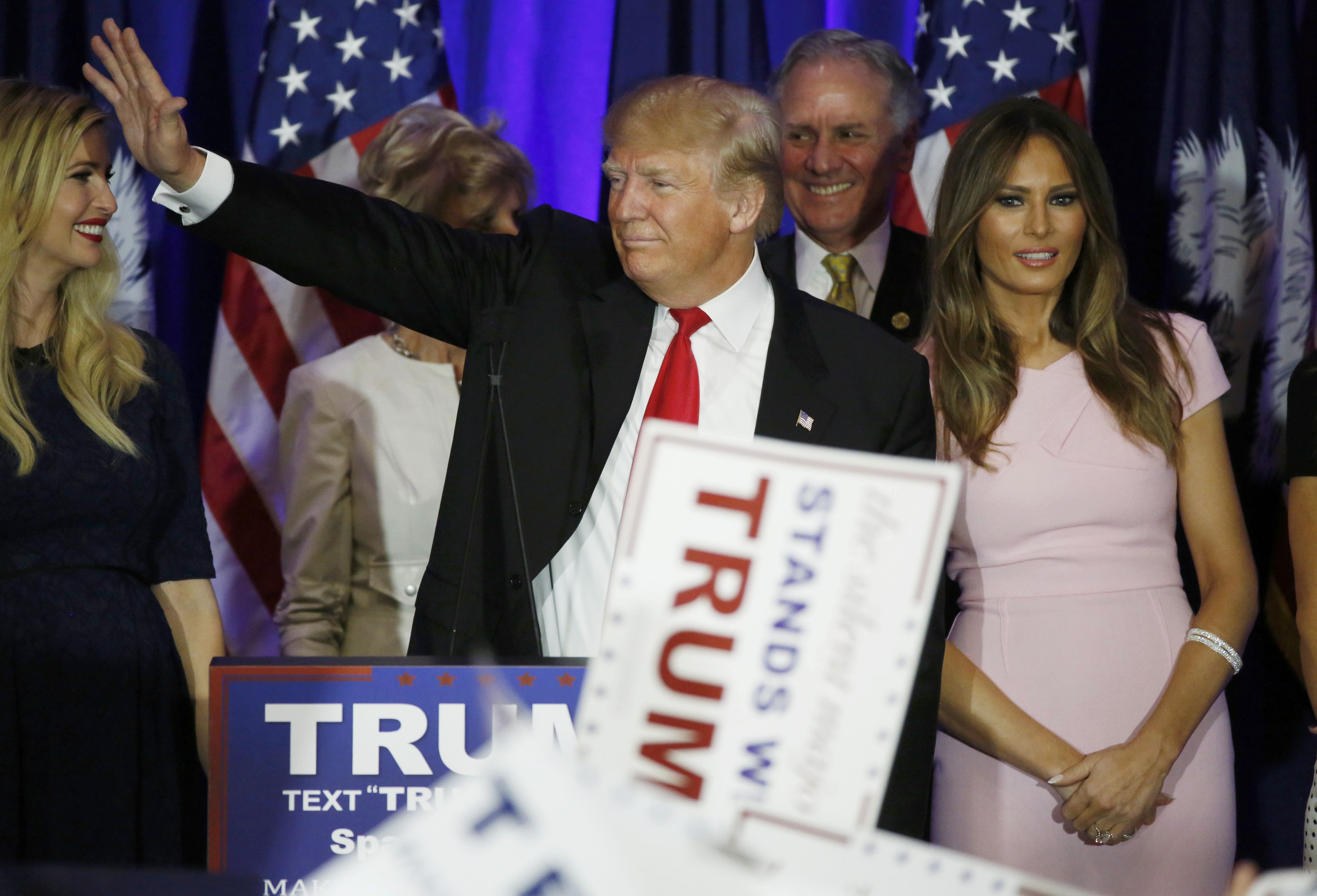 "We are going to start winning for our country," Trump told supporters at his campaign headquarters in Spartanburg. "I was watching upstairs and it was really amazing to be watching what I was watching. Some of the pundits said 'well, if Trump and the other candidates dropped out - if you add them together, they'll equal Trump.' They don't understand -- as they drop out, I'm gonna get a lot of those votes also."

The businessman said he was headed to Nevada to campaign Sunday and predicted he would do "terrific" both there and in the SEC primary, the collection of southern states that vote on Super Tuesday.

While he congratulated rivals Ted Cruz and Marco Rubio by name, he neglected to mention another opponent: Jeb Bush, who withdrew from the White House race Saturday night.

"Ted and Marco did a really good job," Trump said. "Did quite well. One sentence right? Good."

After he commended the two senators, however, Trump's audience booed. But then he promised, "We go back to war tomorrow morning."

Of campaigning, the reality television star added: "It's tough, it's nasty, it's mean, it's vicious. It's beautiful. When you win, it's beautiful."

He rehashed other key tenets of his presidential platform as well, promising to do "beautiful work" by dismantling Obamacare, protecting the Second Amendment, ridding the country of Common Core education standards, and forcing Mexico to pay for a border wall.

Trump was joined by several family members on the stage, including wife Melania Trump.

"He will be the best president," Mrs. Trump told South Carolina supporters.

Polls closed at 7 p.m. EST in the first-in-the-south Republican primary on Saturday and exit poll results began to trickle in just after 5 p.m. EST.

The billionaire's projected win comes despite the fact that 41 percent of voters said he has been running the most unfair campaign, while a third said the same about Cruz.

Three-quarters of GOP primary voters said they support Trump's proposal to block Muslims from entering the United States. Twenty-three percent, on the other hand, said they oppose the proposed ban.

About three-quarters of GOP voters described themselves today as born-again or evangelical Christians. Of that group, Trump won slightly more of the vote, 30 percent, than Cruz, who got 29 percent. Trump also did better than any of the other candidates with those voters who aren't evangelical or born-again.

According to early exit polls, 32 percent of the state's Republican voters named terrorism as the most important issue. A plurality of voters said the most important quality is that a presidential candidate shares his or her values. More than half of GOP voters said they are dissatisfied with the federal government, 40 percent are angry and only 7 percent are satisfied.