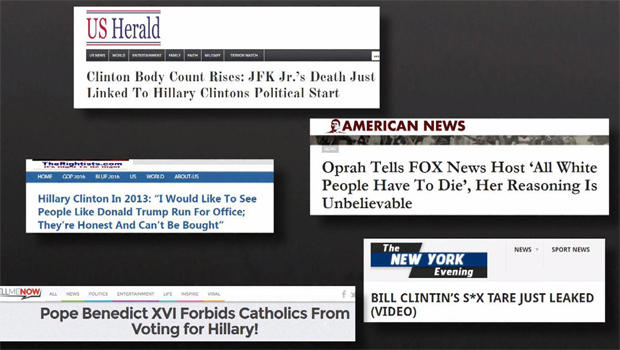 Are the news stories we Americans read, see, and hear FACT OR FICTION? A loaded and sharply-divisive question in these partisan high-tech times. No wonder the Oxford Dictionaries recently proclaimed “Post-Truth” to be the Word of the Year.
Our Cover Story comes from Senior Correspondent Ted Koppel:

Alex Jones: “I’ve been told this by high-up folks. They say, ‘Listen, Obama and Hillary both smell like sulfur.’ I never said this because the media will go crazy with it, but I’ve talked to people that are in protective details, they’re scared of her. And they say, ‘Listen, she’s a frickin’ demon and she stinks and so does Obama.’ I go, ‘Like what?’ ‘Sulfur. They smell like Hell.’”

There’s nothing new, of course, about using media to commit political slander. In 1796, an anonymous editorial accused Thomas Jefferson of cowardice, of running away from British troops. The unidentified author? The current toast of Broadway: Alexander Hamilton.

Our revered founding fathers could sling mud with the worst of them.

It’s not the nastiness that’s new; it’s the delivery systems.

A radio talk show host by the name of Alex Jones can be heard nationwide spreading the manure that fertilizes conspiracy theories all over the Internet:

Jones: “’Pizzagate’ as it’s called, is a rabbit hole that is horrifying to go down!”

The charge that Hillary Clinton and her campaign manager, John Podesta, were running a child pornography ring out of the basement of a Washington pizza restaurant did not, as best we can tell, originate with Jones. The accuser remains anonymous. But that story had real consequences.

For weeks now, people have been accusing Lissa Muscatine and Bradley Graham of smuggling children through an underground tunnel from their bookstore, Politics and Prose, to the pizza restaurant.

They continue to receive threats, “both online and on the phone,” said Graham.

“I really call it the weaponization of social media and the Internet,” Muscatine told Koppel. “What it’s entitling people to do, or enabling people to do, is to take completely false information, make up whatever they want with no accountability.”

So, what do you do? You call the police, or the FBI.

“It turns out there’s quite a high bar that’s required for police and the FBI to take action, thanks to our First Amendment protections,” Graham said.

“Has that made you rethink whether the First Amendment needs some modifications, given the age in which we live?”

“It certainly has,” Muscatine replied. “My father actually lost a job in defense of the First Amendment, back in the McCarthy era. So I am probably, more than most people, pretty sensitive to that issue. However, we live in a different world now. And it’s a brave new world that we still have not figured out. The purveyors of this stuff have been able to run rampant with no accountability, and been able to do damage fairly freely.”

Hold on, though: We love the First Amendment: Free speech, the right to criticize our leaders; protection, among other things, for our cartoonists, comedians and satirists.

Until recently, the targets of satire were obliged to grit their teeth, grin and bear it. But the shape of the battlefield has changed.

Many more people received Donald Trump’s tweet, reacting to the Alec Baldwin impression, than those who saw the original skit on NBC.

“Ted, you’ve been doing this for a million years; the average American could never have gotten to you and said: ‘Hey, Ted, you know, you missed this point!’” said Glenn Beck, who has one of the most popular radio shows in the nation.

“Now, there’s parity on social media. The downside is, there is no gatekeeper and there’s not a real feeling of personal responsibility online.”

In his time, Glenn Beck promoted some of the wildest, right-wing conspiracy theories out there.

This is the new, revised Glenn Beck. “Really in the last year and since the election, I have been on as many sources as I can to beg the media to learn from my mistakes,” he said. “You know, sometimes you have a ‘Road to Damascus’ moment. I’ve had my Road to Damascus moment. And if we don’t change this, if we can’t find our way to each other, it’s only gonna get worse.”

Which puts Beck on roughly the same page as Pope Francis. His Holiness compared media’s obsession with scandal and ugly things to the sickness of coprophilia. If you’re just finishing breakfast, look it up later; but it’s nasty.

It can, however, also be profitable.

“There is now an industry out there of people who are producing things that are untrue and that are highly shareable, which is the magic word,” said Margaret Sullivan, media correspondent for the Washington Post. “It’s all about engagement. If you can get things shared, you may actually be able to make money from it.”

Even if you make a fraction of a penny for every hit an article gets, it can add up.

Sullivan noted there is a group of teenagers in Macedonia who were doing nothing but coming up with fake news stories, with headlines like “Pope Francis XVI Forbids Catholics From Voting for Hillary!” and “Oprah tells FOX News Host: ‘All White People Have To Die,’ Her Reasoning Is Unbelievable”: “They set up their own sites and they registered to attract advertising through Facebook. And they put these stories out there that were completely wrong. I mean, made up to be wrong, but [which] sounded believable enough that people started sharing them. And they could make, you know, pretty good money for teens in Macedonia.”

Just this week, Facebook implemented a new policy that will make it more difficult for the purveyors of fake news to get paid.

But fake news is far from being the greatest threat. Koppel asked Sullivan, “So, one of your correspondents comes to the editorial board of the Washington Post and says, ‘Here’s this story which was leaked by the Russians to WikiLeaks, and WikiLeaks has just leaked it to us. And we’ve checked on it, and it turns out to be true.’ What do you do with that?”

“Well, we actually faced that choice throughout, you know, the past few months,” she said.

White House Press Secretary Josh Earnest said, “What the Russians did in the context of the election was to go and take information that was stored privately, hack into it, and release it selectively over the course of many, many days, in an effort to try to politically damage -- or at least erode confidence in our political system, in a way that did politically damage one candidate for president.”

“If indeed the Russians have been engaged in trying to delegitimize one candidate, aid another candidate, undermine the electoral process, that comes dangerously close to a belligerent act, doesn’t it?” Koppel asked.

“Obviously it’s an unwelcome one; and that’s why you’ve seen such a robust response from the U.S. government,” Earnest said.

“Well, you’ve seen a robust response in terms of basically making clear publicly, and in private --”

“I’ve heard a lot of talk. Has there been any response? A ‘robust’ response?”

“It only matters if you follow it up with action.”

And, before leaving on vacation, President Obama hinted broadly that action was either forthcoming or had already been taken. The president also urged us to look in the mirror:

“If fake news that’s being released by some foreign government is almost identical to reports that are being issued through partisan news venues, then it’s not surprising that that foreign propaganda will have a greater effect,” Mr. Obama said.

Koppel asked Earnest, “Is this an area where the First Amendment remains relevant?”

“I think it’s always relevant, right? It’s the foundation of our democracy. But one of the things we accept as citizens of the United States, are reasonable and responsible limitations on our constitutional rights. For example, I think most famously, the Supreme Court has said, ‘You can’t yell fire in a crowded theater,’ because that could pose a threat to the public.”

To which Jonathan Turley, a First Amendment scholar at George Washington University, said, “If there was one statement of one justice in one case that I could eradicate from the face of the Earth, it would be Oliver Wendell Holmes’ statement about crying ‘fire’ in a crowded theater.

“I think there is a lot of reason to be worried,” Turley continued. “There’s no question that mainstream media is collapsing on many fronts. The competition from the Internet is insurmountable. But more importantly, people now have the ability to create their own personal echo chambers, to go to news sources that reaffirm their feelings. The question is, how do we solve that problem? The one way we can not do that is to look to the government. That is the siren’s call of censorship.”

How about a renewed respect for facts?