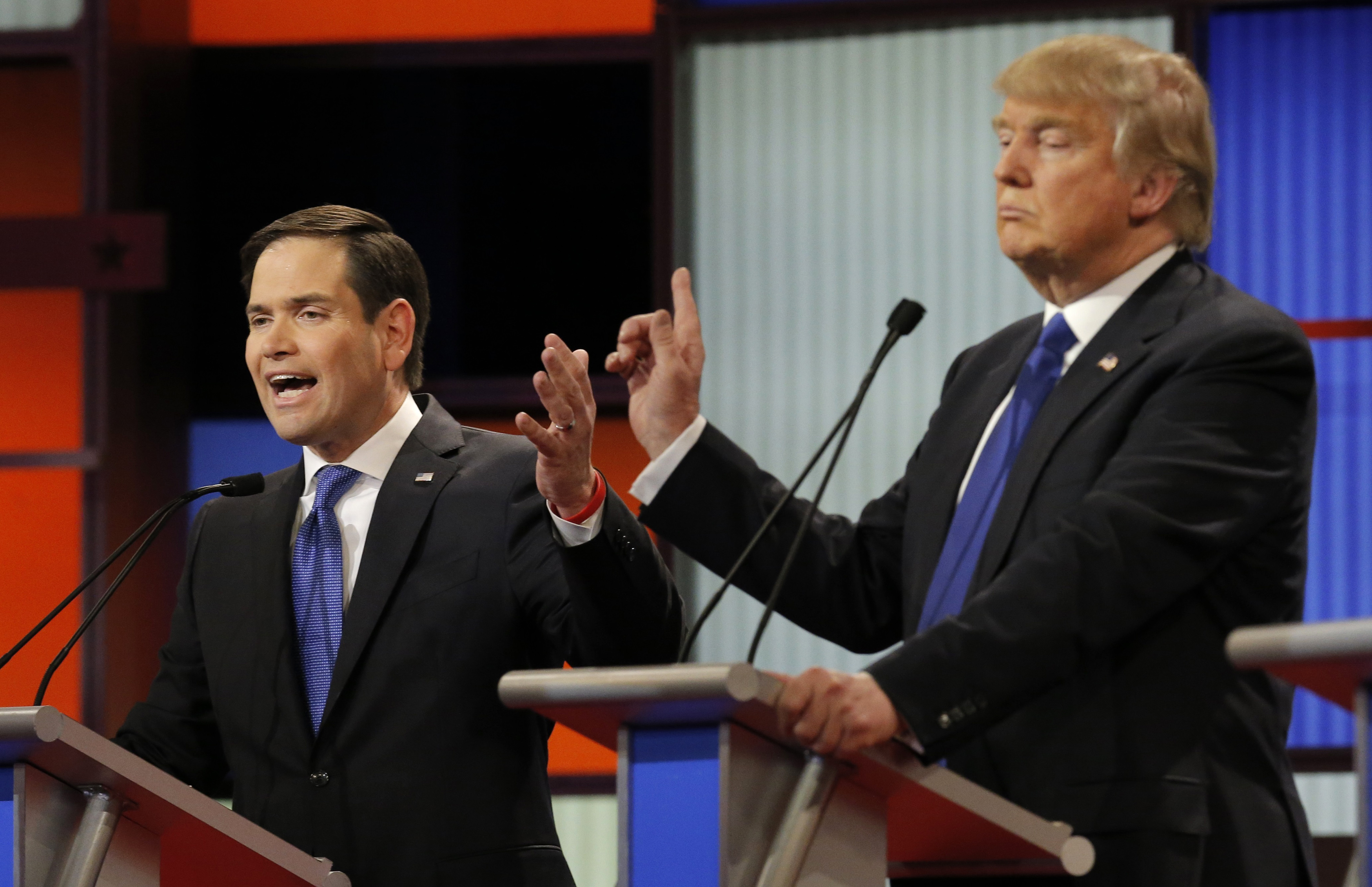 Senator Marco Rubio and Donald Trump both have their eyes set on victory in Florida -- but for Rubio, that has meant keeping his party’s nominee at a distance.

This is the reality of the Trump effect on Republican Party: down-ballot candidates don’t want to cozy up too close, but they don’t want to drift off too far, either.

“Maybe Rubio thinks it will hurt him to be out with Trump. But I don’t know, I don’t want to put words in his mouth. But they don’t have to be best friends. It is politics,” says Michael Barnett, Palm Beach County Republican Chairman. Barnett is a Trump supporter, and has been since the primary. He describes Rubio as “quietly supporting” Trump.

But that quiet support is being coupled with loud disapproval.

For example, when a 2005 tape of Trump speaking about forcibly touching and kissing women was released last week, Rubio quickly criticized him.

“Donald’s comments were vulgar, egregious & impossible to justify. No one should ever talk about any woman in those terms, even in private,” he tweeted. Days later, he put out a statement saying he wished that there were “better choices” for president. He’s also knocked what he calls Trump’s “offensive rhetoric and behavior” and has repeatedly said the two disagree on many issues.

Earlier in the month, Newsweek reported that Trump had business dealings in Cuba in the late 1990s that would have been illegal due to the US embargo. Rubio, himself the son of people who had fled Cuba, said he was “deeply concerned” with the report.

Rubio has even refused to revoke his description of Trump as a “con man,” one of his more memorable characterizations of Trump from the GOP presidential primaries.

Although the two erstwhile rivals have since publicly made up, with each man formally endorsing the other, Rubio has avoided any kind of full-throated praise for Trump. For his part, Trump has been largely unwilling to attack Rubio, as he has other critical Republicans, such as John McCain and Paul Ryan.

Rubio is also maintaining a physical distance from the nominee. He has yet to attend a Trump for president rally in Florida, and has no plans to do so.

“This may not be as much about 2016 as it is about the future,” says David Johnson, formerly the state’s Republican Party interim executive director. “If Rubio stands on the stage with Trump, those could be tough pictures to look at in 2020.”

Republicans in the state say that distancing himself from Trump completely could alienate Trump supporters. Rubio can’t make that gamble. Why? Trump won 66 of the 67 counties in Florida during the Republican primary. Rubio, meanwhile, only accrued 27 percent of the vote. As a result, Rubio is not cutting off all ties with the Trump faction of his party.

“What candidates need to do is they need to control what they can control and eliminate those throes of risks from impacting the campaign. Rubio is taking a more cautious type of a strategy,” explains Justin Sayfie, a lawyer in Florida and a well-connected former Jeb Bush adviser. “In some ways it is kind of a page out of Trump’s playbook. He defines his own brand.”

Rubio’s campaign has funded 18 statewide republican party victory offices that are not jointly operated by the Trump campaign. This is an anomaly, as parties usually try to keep state and presidential operations in sync. But Rubio, who currently enjoys a healthy lead in the polls against Democratic challenger Rep. Patrick Murphy, particularly with Hispanic voters, has kept Trump at arms length as much as possible.

Still, Murphy is using the Senator’s muddled relationship with Trump as fodder to fuel his campaign. At a rally in Miami, Murphy said that when Trump goes low, Rubio “is right there with him.” Murphy’s campaign emails also consistently tie Rubio to the businessman at the top of the ticket. According to a recent one: “Yesterday, a recording surfaced of Donald Trump boasting about sexually harassing women. How did Marco Rubio respond? With a tweet and empty rhetoric. The bottom line is this: he still wants Donald Trump to be our next President.”

The Democratic Party of Florida is also hammering the Rubio for not defecting from Trump.

“Marco Rubio has gone to unconscionable lengths to excuse or ignore Donald Trump’s racism, sexism, and violent rhetoric,” said Florida Democratic Party spokesman Max Steele in a press release. “The self-interested Senator has consistently prioritized his own political career over the well being of Floridians and his continued support of Trump in the face of these allegations is unacceptable.”

Republicans, however, say that hitting Rubio with Trump isn’t necessarily a bad thing.

“I think it is a compliment to Rubio and his electoral strength that the best hit they can take at him is that he is in the same party as Donald Trump,” explains Sayfie. “If I were Marco Rubio, that’s fine with me.”

It’s also fine with some Trump supporters, who don’t begrudge Rubio wanting to stay away from the GOP nominee. “I don’t think so,” one Trump supporter said at a Florida GOP debate watch party this past weekend when asked if the two should campaign together.

“Trump did do a lot of hurt to him in the primary. And they are different people.”