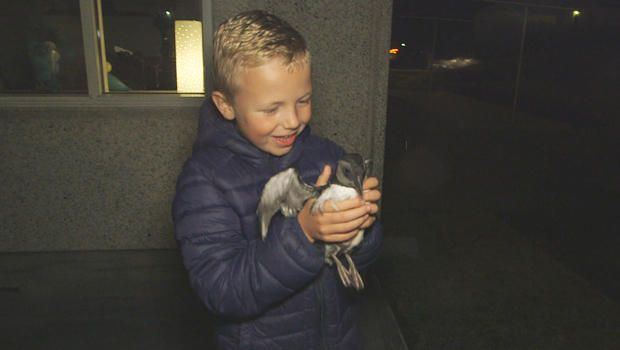 COVER STORY: A children's puffin rescue squad | Watch Video
The island of Heimaey, just off the coast of Iceland, is a breeding ground to Atlantic Puffins. But the colorful birds are not as plentiful here as they once were. Scientists say their numbers have been down by a third or more just since 2002. And one threat to the puffins is the local fishing village's bright lights, which can confuse young pufflings and draw them away from their nocturnal feeding ground.

ALMANAC: The designer of Radio City Music Hall | Watch Video
"Sunday Morning" looks back at the career of Donald Deskey, an advertising man behind New York City's Art Deco showcase, who died on April 29, 1989 at the age of 94.

ART: Grant Wood: An American artist | Watch Video
He is inarguably Iowa's most famous artistic son. Grant Wood (1891-1942) is best-known for his painting "American Gothic," one of the most recognizable portraits in history. Now, the Whitney Museum of Art in New York City has organized the largest exhibition ever of Wood's art. Anna Werner reports.

FOR THE RECORD: Janelle Monáe | Watch Video
Tony Dokoupil profiles the singer and actress, whose new album is 'Dirty Computer."

CONNECTIONS: The stories behind Craigslist Confessional | Watch Video
Washington, D.C. lawyer Helena Bala experienced an unusual sense of connection and fulfillment five years ago when she saw a homeless man, with whom she stopped and shared a sandwich and a conversation. After listening to his story, she posted an ad on Craigslist offering to listen to anyone who just needed to talk. She was immediately flooded with requests. And so began "Craigslist Confessional." Bala talked to Jim Axelrod about how what she offers to the hundreds of people desperate to talk is very different from typical therapy.

ON STAGE: Denzel Washington on when the work pays off | Watch Video
Michelle Miller interviews the actor, now starring on Broadway in the Eugene O'Neill classic, "The Iceman Cometh."

HARTMAN: From NASA designer to school custodian (Video)
Maury Forrester, 77, works as a custodian at Coulter Grove Intermediate School near Knoxville, Tennessee. You wouldn't realize that, in an earlier life, Forrester was an electromechanical designer, part of the team that put a man on the moon. Steve Hartman reports on finding the key to a successful career.

MUSIC: Barbershop: A harmonious passion (Video)
In Las Vegas, at the annual convention of the Barbershop Harmony Society, the boys of four-part harmony packed them in. Barry Petersen checks out the acts large and small, and asks, in these polarized times, who couldn't use a little more harmony?

OPINION: On the end of Bill Cosby | Watch Video
Nancy Giles on witnessing the death of an image, of the Bill Cosby she thought she knew, following his conviction on sexual assault charges.

NATURE: Redbuds (Extended Video)
We leave you this Sunday Morning in the pink ... Pink, Oklahoma, that is, where the Redbuds - Oklahoma's state tree - are in bloom. Videographer: Roy Neher.

NATURE UP CLOSE: Hummingbirds
Arizona's Sonoran Desert plays host to a high diversity of some of the world's tiniest birds

Follow the program on Twitter (@CBSSunday), Facebook, Instagram (#CBSSundayMorning) and at cbssundaymorning.com. "Sunday Morning" also streams on CBSN beginning at 9:30 a.m. ET and at 1 p.m. ET, and is available on cbs.com, CBS All Access, and On Demand. You can also download the free "Sunday Morning" audio podcast at iTunes and at Play.it. Now you'll never miss the trumpet!

Moxie, the soft drink with moxie

Olivia Newton-John on finding joy in a life with cancer
Thanks for reading CBS NEWS.
Create your free account or log in
for more features.
View CBS News In
CBS News App Open
Chrome Safari Continue
Be the first to know
Get browser notifications for breaking news, live events, and exclusive reporting.