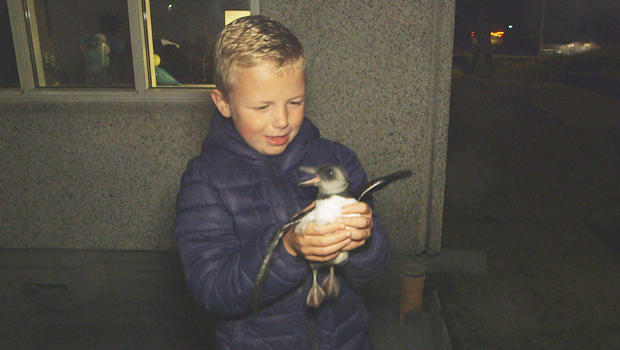 Lee Cowan takes you off the coast of Iceland on a midnight mission that's become a tradition for all involved. It's called the Puffling Patrol, a group of volunteers lending the tiniest of helping hands to some lovable birds in need:

They weren't visible at first, but out of the mist, there they were -- like giant, moss-covered icebergs.

The Westman Islands poke out of the Atlantic just off the southern coast of Iceland. None of the islands are inhabited, save one -- the island of Heimaey, and even it almost wasn't. A volcano erupted back in 1973 forcing the evacuation of everyone there.

There are now about 4,500 hearty souls who live in this fishing village. But they weren't who Cowan came to visit. He came to see the residents perched high in the cliffs: the island's Atlantic Puffins.

They're impossibly cute -- even if birding isn't your thing.

Their colorful beak inspired their nick-name "Clowns of the Sea." And every Spring, they make these islands their big top.

They couldn't be more celebrated here; a six-foot puffin statue greets tourists in the harbor.

The street signs bear their beak; so do the benches. And there is plenty of puffin paraphernalia for purchase.

"They have really been a big attraction for tourism, which is now one of our biggest industries," said biologist Erpur Hansen.

But Hansen says puffins are not as plentiful here as they once were. Their numbers have been declining -- down by a third or more, he says, just since 2002.

"The species is still very abundant in the Atlantic, but when you have these long-term declines, then you start getting worried," he said. "If this continues, it's not going to end very well."

It's not all puffin hunting that's to blame -- yes, that does happen. It's been going on since the Vikings settled the place.  In fact, we found puffin as an appetizer at one of the island's restaurants.

While the hunting certainly doesn't help, Hansen says the puffins have larger issues -- breeding problems for one.

Cowan followed Hansen to the top of the sea cliffs while he inspected the puffin's burrows: "You can see underneath the wing here, it's hiding something under the wing. There is a chick underneath there."

At one burrow he noted, "This one is incubating a small chick. It's very late. I'm not sure that chick is going to make it."

Just getting out of those burrows to begin their lives can be risky.  It happens after the sun dips into the Atlantic -- and the moon rises high above.

Instinct tells baby puffins to follow that moonlight out to sea. But the lights from Heimaey's harbor have given the moon some competition.  Many pufflings get confused and fly toward the lights of town instead, where they either starve or end up in the clutches of a hungry cat.

And that's when something called the Puffling Patrol -- armed with headlamps and flashlights -- scrambles into the inky black.

"It's not so easy to find a puffin, I guess," said one child.

This is a rescue effort that's been generations in the making -- one that's led by the children of Heimaey, like seven-year-old Aron Sindrason.

It was like Christmas morning when his dad Sindri woke him up just before midnight. Aron didn't want to miss a moment of this annual puffin ritual.

Cowan asked, "Do I get anything special if I spot one? Is there, like, a puffin award?"

"You get to catch it!" Sindri replied.

To catch one, though, you have to find one -- black birds on black streets, no easy task.

But before long, a little luck. Aron and his mom, Hildur, race out of the car in search of their puffin prize. The problem:  sometimes a catch doesn't always stay a catch.

Aron even started employing his secret weapon -- making a puffin mating call of sorts. And it worked!

He even rescued one right in his grandmother's backyard.

Pufflings were everywhere, and so were their pint-sized rescuers -- which explained the charming sight the following morning when a parade of kids, bundled against the cold -- some barely old enough to walk -- bringing their catch to the shore and setting their pufflings free.  Aron and his little sister, Sarah, were among them.

"This is something we did when we were younger and I'm very glad to be able to do it with my kids," said Sindri.

"What's so sweet about it is, it really is a tradition that's passed on from one generation to another, right?" Cowan said.

"It is," replied Hildur. "And it's quality family time. Sometimes there's a little bit of sadness and some tears if we go home and we didn't find any, but there's quality time that you have with your family."

But this is only part of the Puffling Patrol's mission.

All those kids with all those boxes first bring their puffins to the local aquarium. This is where kindness and science meet.

Each puffling is weighed, its wingspan measured, and all their puffin particulars are entered into a handwritten journal. They're tagged, too, each given their own number.

Good energy -- and good research, as it turns out. Hansen is more than happy for all this pint-sized help.

Cowan asked, "How much does that add to the data that you have?"

It's all fairy tale kind of stuff, except for the puffins themselves, of course.

And no one is more aware of the stress it puts the birds than their young rescuers themselves.

"No!" she laughed. "How do they thank you by biting?" Good point!

There's an understanding, it seems, between bird and child -- an unspoken promise that is kept as soon as they're both back at that wind-swept cove -- where friendship is traded for freedom.

Cowan found there is a technique to it -- sort of a two-handed softball pitch.

Nearly 5,000 pufflings were scooped up, tagged, and put back on course this season -- one of the largest rescue seasons in over a decade. If all goes well, they'll return from the open ocean to raise their own chicks here -- where Aron and his young friends will be waiting to help the next generation of puffins prosper.