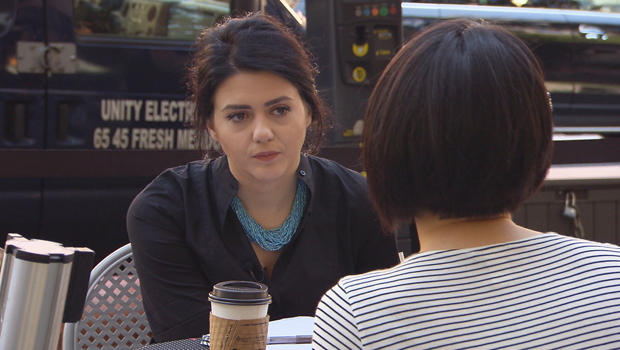 If a woman you didn't know offered to JUST LISTEN to whatever you had to say, would you do it? You might if you felt you had no one else to confide in. Our Jim Axelrod has been giving her a listen:

In her journals Helena Bala keeps a record of other people's secrets – notes from more than 300 conversations she's had in the past few years. "This is an Army veteran, a double-amputee, who is coping through his ordeal," she said of one entry.

Some of it is troubling: "Addiction, prostitution."

Some of it is heart-breaking: "Childhood incest at the hands of his uncle."

But all of it is unusual, because all of these conversations Bala has had – people sharing their deepest and darkest – all of them were with total strangers. "It's giving people who don't have a voice – to their family, to anyone else that they know, to their close friends – a voice," she said.

Sometimes the conversations are on the phone; often they're face-to-face.

Like the two meetings she had with a man who just wanted to tell someone about his wife, who'd died from alcoholism. "I wanted to just tell somebody what a wonderful person my wife was, that she wasn't defined by her drinking," he said. "She was defined by this wonderful spirit she had."

He explained to Axelrod, "I really felt I connected with her heart, and she was such an incredible listener."

This incredible listener's journey started five years ago in Washington, D.C., where Bala was a lawyer. Heading back from a meeting carrying her lunch, she saw a homeless man. Something inspired her to sit down, share her sandwich ... and start listening.

"Here we are sitting on a street corner talking to each other and having a conversation much deeper and much more involved than any that I really had with close friends and family in the past," she recalled. "So I was thinking, 'How do I recreate that feeling for other people?'"

What you do (if you're Helena Bala) is place an ad on Craigslist inviting anyone who needed to talk ("without fear of stigma or judgment") to get in touch.

Her Craigslist Confessional was an instant hit.

How quickly did she hear from someone? "Woke up the next morning, inbox is flooded," she said.

"The first one was a woman who had been a heroin addict for 20 years. And she wanted to share her experience. We were walking through downtown D.C. right by where I worked, and she said, 'I used to buy dope right here on this corner.'

"And she said, 'Thank you so much. Thank you so much for listening to me.' And this blew my mind. I mean, I hadn't done anything extraordinary; I wasn't providing any amazing insight into her own life. I was just sitting there listening to her kind of tell me about her journey."

But instead of cutting back, Bala went all-in. She quit her job, and with her husband's support gave her time, full-time, to strangers.

Axelrod asked, "Did your husband or any close friends or family say, 'Hey, this is great. You found what you love to do. Go get a graduate degree in psychology. Become a therapist'?"

"This is very different from a therapy session," she said. "I'm just listening. I'm not trying to get you to get better, or have an end result."

Barton Goldsmith, a leading psychotherapist, admires Bala's huge heart, but not what he sees as a naïve approach.

"If someone is in real pain, and they tell their story, and there's no follow-up, there's no healing given, then all she's doing is putting a Band-aid on a toxic emotional wound," Goldsmith said.

"Not just to maybe pull the scab off to see that you have a wound, but to actually dress that wound?" Axelrod asked.

"You've gotta heal it. You can't just let it sit there and fester. It's never going to heal if you leave it open."

But tell that to the man who lost his wife, who like all of Bala's strangers, will remain anonymous: "It's a one-time deal. Your life is changed, you're thankful, you're grateful," he said.

"The act of her listening to you allowed you to move forward?" asked Axelrod.

"Yes, but part of that being heard is, I'm being self-honest enough to hear myself, to discover myself, to reveal myself to myself. And I know that sounds crazy, but that's what it is."

Helena Bala still talks with a few strangers every month, and plans to continue as long as there are people who need her. It's a much-needed reminder about the world we inhabit.

Even though in this Facebook age we are "sharing" more than ever, plenty of us are still failing to connect.

Axelrod said, "We live in this age of social media saturation. Aren't we already sharing too much?"

"Of the wrong thing," Bala replied. "I mean, our veneers are quite perfect. We look great! We look like we're functional human beings, no problems. And that's kind of what we want to portray to society, right? We're doing great!"

Except, she added, for the holes in one's heart.

Bala's prescription to heal those holes is a simple act of kindness: just listen.

"There's a popular saying: 'A burden shared is a burden halved,'" she said.

"That's what you're doing, halving burdens?"