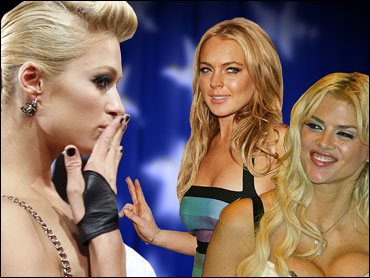 Whether it was Paris Hilton being spared some jail time, or Melinda Doolittle being sent home from "American Idol" before her time, the ticking clock and the passing days on the calendar played a part in this week's news.

Paris Hilton found out this week that she'll get some time off for good behavior on her jail sentence, and will likely serve only 23 of the 45 days. She withdrew her appeal of the charges, too.

Lindsay Lohan won't have to spend a minute worrying about accusations she stole clothes from a Los Angeles woman's home. Prosecutors decided that there's simply not enough evidence to prove the woman's claims.

Maxim magazine editors decided that most of their readers would choose to make sexy time with Lohan, so they named her No. 1 on their annual Hot 100 list. Jessica Alba was runner-up.

Farrah Fawcett will be making every moment count as she faces a renewed battle with cancer. The actress had been given a clean bill of health in February, but reports say doctors found a new, small polyp.

Considered by the judges to be the most consistent performer, Melinda Doolittle was sent home before her time when she was voted off "American Idol" this week. Even Simon Cowell buried his head in his hands when the announcement was made that Doolittle won't be making the finals next week.

The late Anna Nicole Smith kept track of time in a series of diaries about her life. Newly-released diary pages reveal the starlet was delighted by rough sex, ecstatic over the prospect of plastic surgery for her breasts, and fearful of a jealous boyfriend.

Britney Spears decided it was time for prayer and thanks so she left a message on her Web site, waxing spiritual about her fans' loyal support during her divorce proceedings and recent stint in rehab. But, being Britney, she put the prayerful message alongside a naked photo of her shown from the waist up, with her arms chastely covering her breasts.

Rock 'n' roll legend Bo Diddley was walking around his hospital room just four days after suffering a stroke, his manager said Friday. Doctors are encouraged that the singer and guitarist will continue to improve, the manager added.

It was definitely spring time on Broadway Tuesday as the musical "Spring Awakening" landed a total of 11 Tony nominations. Tom Stoppard's "The Coast Of Utopia" followed with 10 nominations.

It was country time in Las Vegas this week as country music stars and their fans gathered for the Academy of Country Music Awards. Kenny Chesney was the big winner, taking home the entertainer of the year award for the third consecutive time.

For 60 years, the French seaside town of Cannes has played host to what has become the most prestigious film festival in the world. Huge stars and industry honchos flocked there this week for a series of premieres that included Seinfeld's "Bee Movie" and Michael Moore's "Sicko."

Who knew? It turns out it's been a few months since Denise Richards and Richie Sambora split. They remain cordial, and Richards even attended the funeral of Sambora's father last month in a show of support.

The CW said that time's up for "Veronica Mars" at its annual upfront this week. The network announced its fall lineup, as did CBS, FOX, ABC, Telemundo, Univision and NBC in separate events.

Finally, Tony Soprano's nephew Christopher found out the hard way this week that when it's your time to go, it's, well, your time to go. Christopher is the first, but will likely not be the last, major character to get whacked as the series finale of "The Sopranos" approaches.
By Judy Faber