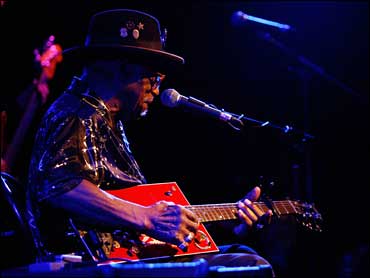 Musician Bo Diddley is being moved out of intensive care to a regular hospital room on Monday.

His publicist, Susan Clary, says Diddley is currently at Creighton University Medical Center in Omaha, Neb., and that he is awaiting word from his lead doctor as to when he can be transferred to a hospital in Gainesville, Fla., near where he lives.

Diddley had not felt well during a show in Council Bluffs, Iowa, a week ago. His manager took him to a hospital the next day when he appeared disoriented. Doctors determined he suffered a stroke.

Diddley's business manager, Faith Fusillo, says Diddley has little or no physical limitations from the stroke besides difficulty with speech and speech recognition. Fusillo says she spoke with Diddley and he wanted to know where his stuff was: his guitar and the money from the gig.