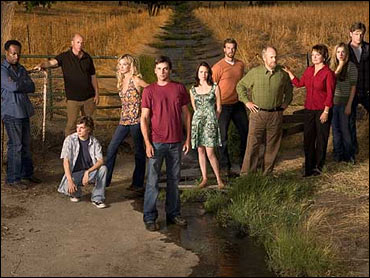 CBS canceled the nuclear apocalypse drama "Jericho" on Wednesday, another sign that television networks are shying away from serial dramas after overloading on them last season.

The network unveiled a fall schedule with five new shows, three of them dramas.

"Jericho" started out strong last fall for CBS. However, like "Lost" on ABC and "Heroes" on NBC, many viewers abandoned the show after it went on a long midseason hiatus.

"We lost a lot of steam," said Kelly Kahl, CBS' chief scheduling executive. "I know we had loyal viewers ... but the show sort of lost its engine and wasn't performing."

CBS' only new show that is heavily serialized, "Swingtown," will start in midseason and run uninterrupted until the end of the season. The series is set in the shag-carpeted 1970s, with Chicago-area couples navigating the sexual freedom of the era.

To counter its stodgy image, CBS has scheduled a handful of edgy new shows for the fall: a drama about a vampire, a musical and a drama about a Cuban-American family running a sugar business in Florida.

"For those of you who accuse CBS of being too conservative, you will feel differently when you see the shows we have lined up," said Leslie Moonves, chairman of CBS Corp.

A new reality show, "Kid Nation," will take 40 children and set them up in an abandoned New Mexico town. Cameras will follow them as they try to set up their own society without adult supervision.

Veteran actor Jimmy Smits is the patriarch in "Cane," about the family sugar business. "Moonlight," about a vampire in modern society, is another one of a handful of high-concept ideas networks are trying out next year.

Hugh Jackman is producing "Viva Laughlin," an adaptation of the BBC show "Viva Blackpool," about a shady businessman. Music plays a central part in driving the series along.

The Monday comedy "The Big Bang Theory" seems like a sitcom version of "Beauty and the Geek," with two brainy guys flustered by a sexy new neighbor.

CBS canceled the comedies "The Class" and "Close to Home." The comedy "The New Adventures of Old Christine" was left off the fall schedule but will be used at midseason.