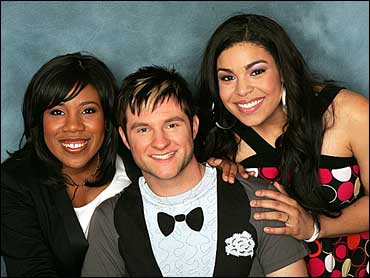 The audience booed and whistled as the news was announced during the last few minutes of the program.

The Brentwood, Tenn. resident seemed just as surprised as the other two contestants when she learned she'd be sent home, but quickly regained her composure and managed a smile.

Simon Cowell had looked annoyed — well, more annoyed than usual — when the announcement was made.

"Congratulations to you two," he said to Sparks and Lewis. "My commiserations, Melinda, because you are one heck of a singer."

A professional backup singer, Doolittle was easily the most versatile contestant on the show, singing the blues, rock, soul and pop classics with equal facility.

"You were the most consistent all season, so be proud," said Randy Jackson.

"If I'm going to award a place in the final for the person who has consistently delivered week after week it's you," Cowell told Doolittle Tuesday night.

The top ten finalists of the season will return for the finale and then hit the road together in the summer for the Idols Live! tour.

At the end of the evening, the judges told Doolittle that her career is well on its way. "You've already made it, Melinda, and now it's time to go out and do your career because you're going to be huge," said Paula Abdul.

The "American Idol" finale airs May 22.
By Judy Faber