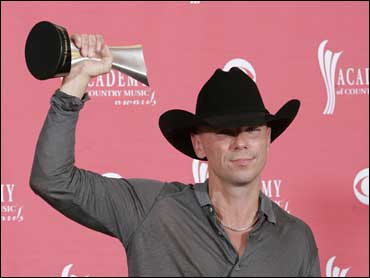 Kenny Chesney collected his third consecutive entertainer of the year trophy Tuesday as the Academy of Country Music also paid tribute to a youngster and some oldsters.

Brooks & Dunn were up against some stiff competition from Sugarland, Montgomery Gentry, Big & Rich and The Wreckers, and Ronnie Dunn fretted before the show that the pair had to lose "sooner or later."

"Not this year," an exuberant Kix Brooks said as the duo claimed the trophy. "It's still as much fun as it's ever been, and we're going to keep doing it."

"When I first started playing music, I was in college and I would go rent all my equipment and put it in the back of a pickup truck. The only thing I wanted to do was cut a record as good as Keith Whitley did, and I listened to that music over and over again," he said.

Strait, who came into the competition with a leading eight nominations, claimed the first award of the night, winning song of the year for "Give It Away."

It was presented by Early Shhow co-anchor Hannah Storm. As he collected his trophy, he seemed particularly touched that as an older performer he wasn't forgotten.

"I'm old enough to be Carrie Underwood's grandfather," the 55-year-old said of his 24-year-old fellow singer.

3Underwood, the 2005 "American Idol" winner, won album of the year for her debut CD, "Some Hearts," and was honored as top female vocalist.

"I would not be here if it were not for 'American Idol,"' she said as she collected her vocal award. "Thank you, fans. God bless you."

Strait was also nominated for entertainer of the year, along with Chesney, Brooks & Dunn, Rascal Flatts and Tim McGraw.

During the show, Swift performed her hit song "Tim McGraw," as its namesake and his wife, country star Faith Hill, sat in the audience beaming.

Lambert attended the ceremonies with boyfriend and fellow country singer Blake Shelton, but he missed her victory.

"He went to the bathroom just as I was winning, so I had nobody to hug," she said.

Brad Paisley was named male vocalist of the year, the only category in which he was nominated. Rascal Flatts captured best vocal group.

2Underwood, whose dark hit "Before He Cheats" dominated the video awards at last month's fan-voted Country Music Television Music Awards, was also up for best female vocalist, single of the year, song of the year and video of the year at the ACMs, where winners are picked by the 4,500-member academy.

The entertainment-driven program, hosted by Reba McEntire, was slated to hand out just a dozen awards. The show aired live on CBS from the MGM Grand hotel-casino, with a tape-delayed broadcast for the West Coast.

Along with the top nominees, performers were to include Martina McBride, Josh Turner, Toby Keith, Sugarland and Paisley.

Brooks & Dunn earlier were named recipients of the Home Depot Humanitarian Award, joining past honorees McEntire, Vince Gill, Lonestar, McBride and Neal McCoy. The group will be honored with two playgrounds to be built in cities of their choice.

"It's a pretty cool thing. I told them we're a duo, so they should give us two. They didn't blink an eye," Dunn said. He is looking for a playground spot in Nashville. Partner Kix Brooks has chosen Shreveport, La.