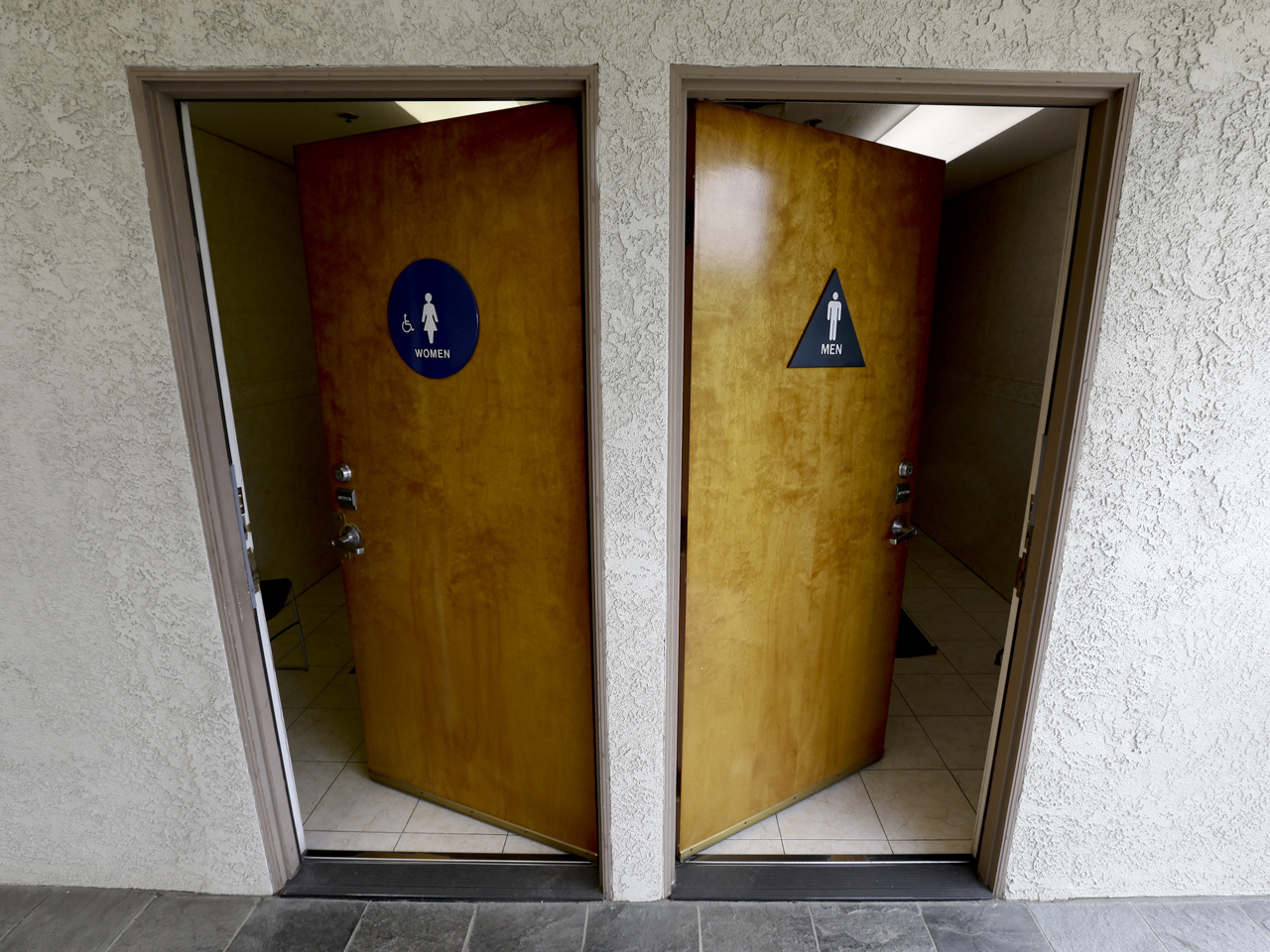 A delicate constitutional question flared up this past week: Do transgender people have the right to use the restroom they feel is right? Mark Strassmann explores that issue in our Cover Story:

"This is about the dignity and the respect that we accord our fellow citizens and the laws that we, as a people and as a country, have enacted to protect them -- indeed, to protect all of us," said Attorney General Loretta Lynch.

Joaquin Carcano wants that protection. The 27-year old activist living in Raleigh, North Carolina, was born a girl. Last year he transitioned into what he believes is his proper gender: a man.

He sees himself at war with his own state.

"As trans individuals, for me personally, there's always a fear that you carry with you, and so that is a part of it definitely, but that goes for any sort of space you navigate in," Carcano said. "But I've never had an issue going into a restroom, [or] coming out."

"And what message in this law was the governor and the legislature do you think sending to you?" asked Strassmann.

"That we're not welcome," Carcano replied, "that they don't want to believe we exist. North Carolina is sending the message that we are not in a welcoming area."

North Carolina's public bathrooms are the new frontier in American civil rights law. That's because almost two months ago, state lawmakers passed a bill saying transgender people have to use the bathroom which matches the gender on their birth certificate.

Backlash was immediate and fierce, from Fortune 500 corporations, celebrity critics like Bruce Springsteen, and President Obama, who said, "I also think that the laws that have been passed there are wrong and should be overturned."

But the law's supporters insist it was enacted to protect women and girls -- both their privacy, and their risk of attack from sexual predators.

"Our nation is dealing with a very new, complex and emotional issue: how to balance the expectations of privacy and equality," said North Carolina Governor Pat McCrory.

Last Monday, McCrory (A Republican up for re-election) announced his state would sue the Obama administration. He was responding to the Department of Justice's charge North Carolina is violating civil rights law, which could cost the state almost $5 billion federal aid.

"We believe a court, rather than a federal agency, should tell our state, our nation and employers across the country what the law requires," he said.

In many ways, this battle is the latest chapter in a story that has its roots in the Supreme Court's landmark Obergefell decision last June, which guaranteed same-sex couples the right to marry.

Just since the beginning of this year, lawmakers in 34 states have proposed so-called "bathroom" bills and "religious freedom" laws that, critics say, target gay, lesbian and transgender people.

These state actions descend from a little-known bipartisan bill signed into law by President Clinton back in 1993: the Religious Freedom Restoration Act. RFRA prohibited the government from unduly interfering in the way Americans express religious beliefs.

Marci Hamilton, who teaches constitutional law at the University of Pennsylvania, argues that RFRA, in effect, granted a license to discriminate.

"Basically, the civil rights groups dropped the ball," Hamilton said. "Everybody was just so excited about religious freedom -- how could you be opposed to religious freedom? But the very smart, very conservative evangelical groups knew what their agenda was.

"It's tilted the balance so that people now have a concept that whatever they believe, they can get around the law, instead of what the Supreme Court's First Amendment cases said, which is that we all have to obey the law.

"When I go to a stop sign, it just doesn't matter that I'm Presbyterian -- I've gotta stop at the stop sign," said Hamilton. "But now, every law is under attack because of this message of complete liberty."

Baronelle Stutzman treasures that liberty. She's the owner of Arlene's Flowers, a 35-year-old family-run business in Richland, Washington. Rob Ingersoll was a favorite customer who shopped there for nearly a decade.

"He's so much fun, I so enjoyed working with him," Stutzman said. "He has a really creative mind, and he would come in and he'd pick out these unusual vases or containers and tell me what the event was for. And then he'd say, 'Just do your thing.'"

Three years ago Ingersoll, who is gay, asked Stutzman, a 71-year-old devout Christian, to do the flowers for his wedding. Instead, she recalled, "I just put my hands on his, and I said, 'Rob, I'm sorry, I can't do your wedding because of my relationship with Jesus Christ.'"

Strassmann asked, "Why couldn't you do it?"

"Because my faith teaches me that marriage is between a man and a woman, and it symbolizes Christ and its relationship with the church," Stutzman said. "As much as I love Rob, my love for Christ is more important."

Strassmann asked law professor Marci Hamilton, "If your lifestyle offends me, why should I be obligated to provide a service when I'm not comfortable with you as a person?"

"Because that's how the free market works," Hamilton replied. "When you walk into Best Buy, nobody should be asking you what your religion is, or what your sexual orientation is, or what you did yesterday. It's Jim Crow. It's just that there are different targets at this point for some of the people."

And the targets, she said, "are the LGBTQ community, sadly. Not just same sex couples; the entire community is being targeted."

But it turns out, both sides in this battle feel targeted.

Kristen Waggoner, who leads a team of lawyers at Alliance Defending Freedom -- an advocacy group representing Christian conservatives -- told Strassmann, "I think what we're seeing is an unprecedented attack against people of faith who have religious beliefs."

Waggoner's group has advised several states with drafting religious freedom laws. "It has nothing to do with how someone identifies in terms of being LGBT or saying that they're straight," she said.

"That's what this is really all about?"

"I think that there's a more fundamental principle, which is whether we will continue to allow a diversity of viewpoints, or we will allow the government to personally and professionally ruin someone because of a religious conviction they have," Waggoner said.

"Do you understand why some critics see this as extreme?"

"I don't understand why it's extreme to say that you wouldn't want to force someone to engage in speech and promote messages that violates their religious convictions, or why it would be extreme that you would want to live and let live and let other people who have a diverse viewpoint or a different viewpoint on marriage live consistently with that belief."

But Marci Hamilton says the law on this matter is clear: "What these individuals are arguing now, in these groups, is that they have 'rights' in order to be able to discriminate against others. But the rights that they're talking about are made up. They are not rights from the Constitution."

In the case of Baronelle Stutzman, Rob Ingersoll and his partner, backed by the ACLU, sued her for discrimination. Washington State's Attorney General also filed suit, claiming she broke Washington's anti-discrimination law, and a state court ruled against her.

Stutzman is appealing, but says potential damages could reach seven figures and bankrupt her business.

She says she's also had menacing calls and emails, and feels "genuinely threatened."

"How many death threats?" Strassmann asked.

But in states like North Carolina, it's people like Joaquin Carcano who feel threatened. To him, the issue goes well beyond bathrooms. "Oh, definitely. I mean, I believe bathrooms are just sort of a cover for the real attack here. And I think it's pure hostility."

Not long ago, the Washington State Attorney offered to drop the lawsuit against Barronelle Stutzman if she paid a $2,000 fine, and agreed to do flowers for gay weddings.

"Even though that would have made it all go away?" asked Strassmann.

"I have a constitutional right that gives me the right to create and to live my freedom and live my faith," she said. "And everybody has that freedom. But once they start taking that away from us, then we don't have anything. We don't live in a free America when they can come in and do that."