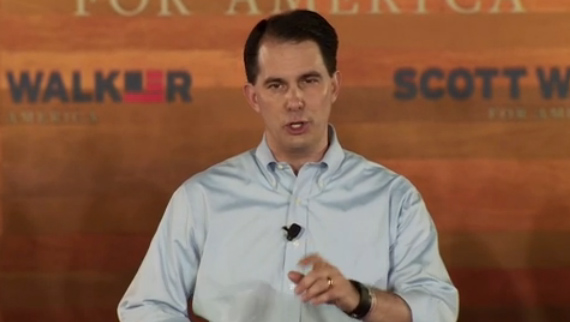 Following in the footsteps of 14 Republican candidates who came before him, Wisconsin Gov. Scott Walker entered the presidential race Monday promising fresh leadership, reform, economic growth and safety for the American people.

"My record shows that I know how to fight and win. Now, more than ever, America needs a president who will fight and win for America," Walker said.

The proclamation followed a list of his accomplishments as governor of Wisconsin: lowering taxes, passing lawsuit and regulatory reform, passing pro-life legislation and implementing voter ID laws in the state. All that followed on what he likely sees as the most important accomplishment, the one that fight that catapulted him into national prominence: "We took on the unions and we won," he said.

He was referring to the 2011 bill he proposed that would have eliminated collective bargaining rights for most public employee unions in Wisconsin. The move sparked raucous protests at the State Capitol building in Madison and an effort to recall Walker from office. After a fierce battle, he prevailed on June 5, 2012, becoming the first governor in U.S. history to survive a recall attempt. It was the second of three statewide elections he would win in a four-year period (the other two were his election and re-election as governor).

"He's the strongest anti-union Republican in the bunch, and that's an issue that resonates both with average Republicans, but also with business Republicans that give a lot of money to the party," Julian Zelizer, a presidential historian at Princeton University, told CBS News earlier this year. "It defines him."

Walker's kickoff speech was held in Waukesha, Wisconsin at the site of his 2012 recall election rally. He has taken the message of standing up to the unions to Iowa and turned it into an early and persistent lead in the polls.

He promised "real reform" for Washington, D.C., modeled after what he had done in his home state, saying, "Our big, bold reforms in Wisconsin took the power from the big government special interests and put it firmly into the hands of the hard-working taxpayers." That included ending seniority and tenure for teachers, a move that Walker credits for Wisconsin's increased graduation rates and test scores.

Walker also pointed to reforms in Wisconsin that require people who receive welfare to first enroll in a job training program and take a drug test.

Recalling his own childhood with a small-town pastor for a father and part-time secretary and bookkeeper for a mother, Walker said he and his brother inherited "the belief that if you work hard and play by the rules, you can do and be anything you want. That's the American Dream. And that is worth fighting for."

"Helping adults who are able to work transition from government dependence to true independence will help more people live that dream," he said.

His plan for growth includes a pledge to repeal the Affordable Care Act, roll back "out-of-control regulations," use America's resources to create energy, approving the Keystone pipeline, and getting rid of Common Core school standards.

To explain his focus on tax relief, Walker compared it to buying a shirt at Kohl's. By the time the shirt goes on sale and he and his wife use coupons and rewards to lower the purchase even more, "they're paying us to buy that shirt." ("Well, not really," he acknowledged.)

He praised former President Ronald Reagan's leadership on foreign policy and said that America is "headed toward a disaster" under the "Obama/Clinton doctrine."

He called for ending any nuclear deal with Iran and allowing U.S. military personnel to directly help Kurdish and Sunni Arab allies fight the Islamic State of Iraq and Syria (ISIS).

He also accused the president and Democratic candidate Hillary Clinton of offering only "mush" that has failed to stop Russian President Vladimir Putin from encroaching into Ukrainian territory.

"Putin bases his policies on Lenin's old principle: probe with bayonets, if you encounter mush, push; if you encounter steel, stop. With Obama and Clinton, Putin has encountered years of mush. The United States needs a foreign policy that puts steel in front of our enemies," he said.

Like some of the other governors seeking the GOP nomination, Walker has turned to various Republican foreign policy experts to give him a crash-course tutorial on the ways of the world, after a few public blunders that highlighted the lack of attention he's paid to foreign affairs in the months leading up to his campaign.

During a Q&A session with members of the Club for Growth in Florida earlier this year, for example, he raised some eyebrows by claiming the most significant policy decision of his lifetime was former President Ronald Reagan's actions to break up a 1981 strike by air traffic controllers, according to the Washington Post. During a foreign trip to London in February, he avoided having to answer foreign policy questions.

And during a speech at the Conservative Political Action Committee in February, Walker suggested his experience dealing with protesters in Wisconsin proves he has the mettle to take on ISIS and America's foreign foes. "If I can take on 100,000 protesters, I can do the same across the world," he said.

Walker's official entry into the race came Monday morning with a tweet and Facebook video featuring an abbreviated version of the vision he laid out in his announcement speech. He is the 15th Republican who will compete for the GOP nomination.

I'm in. I'm running for president because Americans deserve a leader who will fight and win for them. - SW http://t.co/DZG253QjfP #Walker16

In a video released on Facebook, Walker previewed the argument for why he's better positioned to run the country than the more than dozen other competitors for the GOP nomination: "There are some who are good fighters, but they haven't won those battles. There are others who have won elections but haven't consistently taken on the big fights. We showed you can do both."

I'm in. I'm running for President of the United States because Americans deserve a leader who will fight and win for them. SHARE if you stand with me. Support at ScottWalker.com! -SW

Walker will hold a rally Monday evening in Waukesha, Wisconsin, to make the announcement in person.

His political martyr story combined with his record of electoral success and his "I'm just a regular guy" schtick (see: the reference to clipping Kohl's coupons) will be front-and-center as he begins his campaign. Following the announcement speech, he'll barnstorm through four early primary and caucus states with an emphasis on his regular-guy theme with stops at Harley-Davidson dealers in each state, barbecue in South Carolina, a diner in New Hampshire, and a Winnebago tour through Iowa.

But there are several potential cracks in the Walker foundation. He faces dropping approval ratings at home in the face of tough fiscal and economic realities. Like other governors, his foreign policy experience is limited, at best, and he has to deal with some hardcore conservatives have been skeptical about his shifting rhetoric on some red-meat issues like same-sex marriage, immigration and education.

Still, he has proven to be an exciting prospect for Republican voters, which has kept him consistently in the top two or three candidates in polls this year.