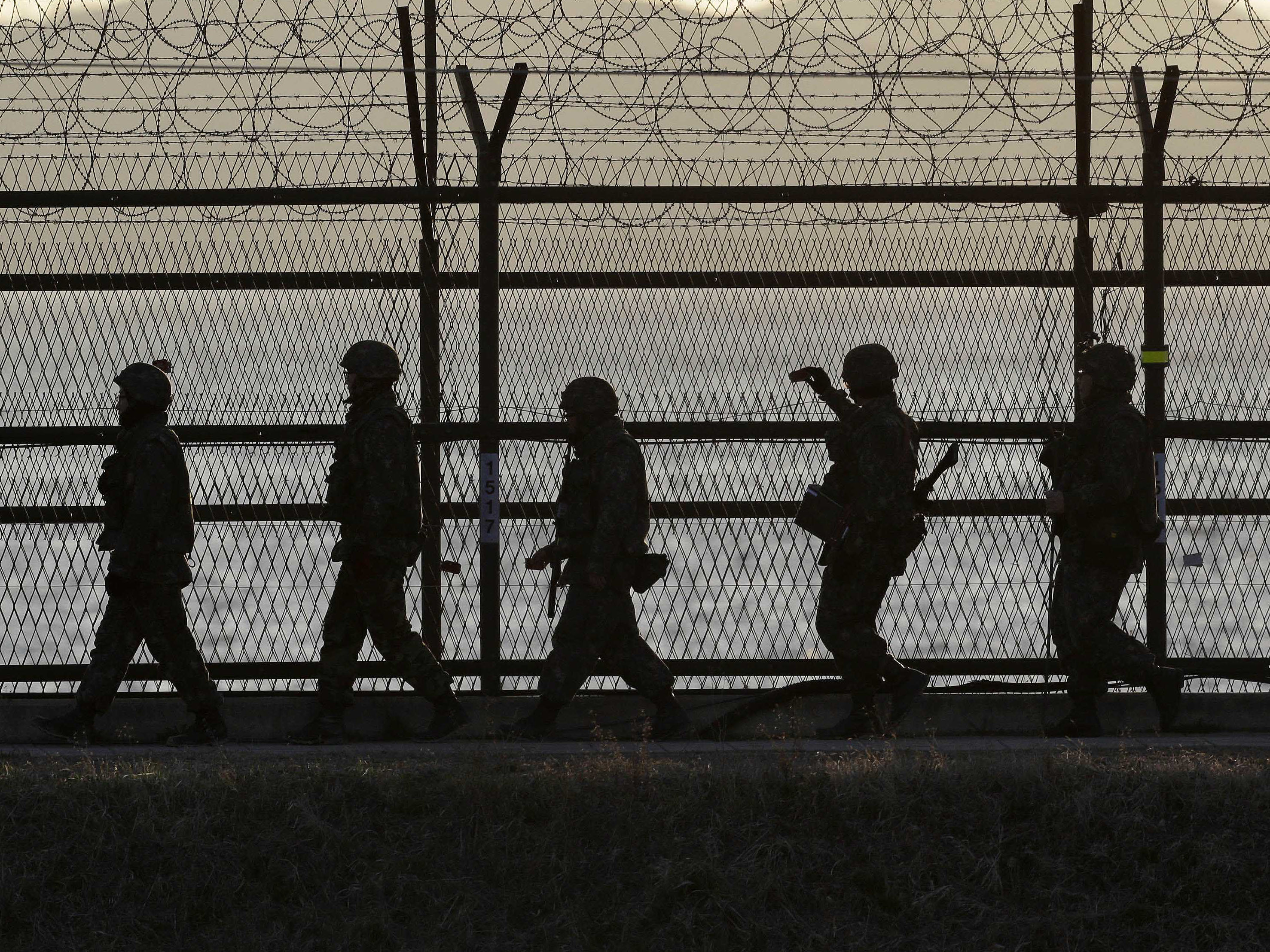 SEOUL, South Korea A top South Korean national security official said Sunday that North Korea may be setting the stage for a missile test or another provocative act with its warning that it soon will be unable to guarantee diplomats' safety in Pyongyang. But he added that the North's clearest objective is to extract concessions from Washington and Seoul.

North Korea's warning last week followed weeks of war threats and other efforts to punish South Korea and the U.S. for ongoing joint military drills, and for their support of U.N. sanctions over Pyongyang's Feb. 12 nuclear test. Many nations are deciding what to do about the notice, which said their diplomats' safety in Pyongyang cannot be guaranteed beginning this Wednesday.

The escalating tensions have upended plans for top American and South Korean military officials to travel to the U.S. this month. Gen. James Thurman, the top U.S. commander in South Korea, will not make a planned trip to Washington this week to testify before Congress in what Army Col. Amy Hannah said was a "prudent measure." He was scheduled to testify on Tuesday and Wednesday.

Additionally, the U.S. Defense Department has delayed an intercontinental ballistic missile test that had been planned for this week because of concerns the launch could be misinterpreted and exacerbate the Korean crisis, a senior defense official told The Associated Press.

Defense Secretary Chuck Hagel decided to delay the test at an Air Force base in California until sometime next month, the official said Saturday. The official was not authorized to speak publicly about the test delay and requested anonymity.

But officials insist that military maneuvers, including an amphibious landing by U.S. Marines, planned as part of annual exercises in South Korea, will go ahead as planned, reports CBS News correspondent David Martin. To cancel those exercises, officials say, would create the appearance of being intimidated by North Korea's threats.

The top U.S. military officer, Gen Martin Dempsey, who just wrapped up a visit to Afghanistan, said he had consulted with Thurman about the rising tensions on the Korean peninsula.

While he doesn't expect North Korea to strike militarily, Dempsey said he "can't take the chance that it won't," explaining why the Pentagon has strengthened missile defenses and made other decisions to combat the potential threat.

Dempsey said the U.S. has been preparing for further provocations or action, "considering the risk that they may choose to do something" on one of two nationally important anniversaries in April — the birth of North Korean founder Kim Il Sung and the creation of the North Korean army. The North has said it would not be able to guarantee the safety of foreign diplomatic staff beyond April 10, the same day given for businesses to withdraw from the Kaesong industrial complex that represents the only cooperation between the two nations.

North Korea is believed to have positioned two missiles on launchers somewhere along the country's east coast. On Thursday, South Korea's defense minister described the first missile as one with "considerable range." The country's Yonhap news agency, citing unnamed defense officials, reported Friday that the North had moved a second missile as well.

The defense minister's description suggests that the missile could be the Musudan missile, capable of striking American bases in Guam with its estimated range of up to 2,500 miles.

But officials don't regard it as a real threat because it is a new missile that has never been tested before, Martin reports. Still, the U.S. missile defense has been put on alert.

In Washington, an adviser to President Barack Obama said "we wouldn't be surprised if they did a test. They've done that in the past."

Aide Dan Pfeiffer told ABC's "This Week" that "the key here is for the North Koreans to stop their actions, start meeting their international obligations, and put themselves in a position where they can achieve what is their stated goal, which is economic development, which will only happen if they rejoin the international community."

He told "Fox News Sunday" that "the onus is on the North Koreans to do the right thing here," adding that "they are the source of the problem and the only way to solve this is for them to take a step back."

If they don't, there will be consequences, Pfeiffer said.

According to Japanese press reports, Japan's navy is positioning destroyers armed with interceptors to shoot down any missiles headed their way. South Korea's navy said it is doing the same.

In recent weeks, the U.S. has followed provocations from North Korea with shows of force connected to the joint exercises with South Korea. It has sent nuclear capable B-2 and B-52 bombers and stealth F-22 fighters to participate in the drills.

In addition, the U.S. said last week that two of the Navy's missile-defense ships were moved closer to the Korean Peninsula, and a land-based missile-defense system is being deployed to the Pacific territory of Guam later this month. The Pentagon last month announced longer-term plans to strengthen its U.S.-based missile defenses.

But those moves did little to tone down North Korea's rhetoric. Over the last week, tensions have steadily ratcheted up, though U.S. officials have stressed that Pyongyang's bellicose rhetoric, including an announcement that plans for a nuclear retaliation on the U.S. had been approved, is likely just part of a long pattern of bluster aimed at extracting concessions from Washington.

Both Secretary of State John Kerry and Hagel urging the North to pursue a path to peace. Kerry will be visiting Seoul this week for meetings with South Korean leaders.

North Korea may also feel increased pressure from China, its only diplomatic and financial backer, to defuse the situation. According to a senior U.S. official, Beijing's relations with Pyongyang have reached a historic low, reports CBS News correspondent Margaret Brennan.

In a significant statement, new Chinese President Xi Jinping said no country "should be allowed to throw a region and even the whole world into chaos for selfish gain." While not naming North Korea specifically, the comment is widely seen as a thinly veiled criticism of China's ally.

Chinese Foreign Minister Wang Yi also voiced frustration, saying in a ministry statement that "we oppose provocative words and actions from any party in the region and do not allow trouble making on China's doorstep."

During a meeting with other South Korean officials, the official, Kim Jang-Soo, also said the notice to diplomats and other recent North Korean actions are an attempt to stoke security concerns and to force South Korea and the U.S. to offer a dialogue. Washington and Seoul want North Korea to resume the six-party nuclear talks — which also include China, Russia and Japan — that it abandoned in 2009.

The roughly two dozen countries with embassies in North Korea had not yet announced whether they would evacuate their staffs.

British Foreign Secretary William Hague suggested that North Korea's comments about foreign diplomats are "consistent" with a regime that is using the prospect of an external threat to justify its militarization to its people.

"I haven't seen any immediate need to respond to that by moving our diplomats out of there," he told the BBC on Saturday. "We will keep this under close review with our allies, but we shouldn't respond and play to that rhetoric and that presentation of an external threat every time they come out with it."

Germany said its embassy in Pyongyang would stay open for at least the time being.

"The situation there is tense but calm," a German Foreign Office official, who declined to be named in line with department policy, said in an email. "The security and danger of the situation is constantly being evaluated. The different international embassies there are in close touch with each other."

Indonesia's foreign affairs ministry said it was considering a plan to evacuate its diplomats. A statement released by the ministry on Saturday said that its embassy in Pyongyang has been preparing a contingency plan to anticipate the worst-case scenario, and that the Indonesian foreign minister is communicating with the staff there to monitor the situation.

India also said it was monitoring events. "We have been informed about it," said Syed Akbaruddin, spokesman for India's external affairs ministry. "We are in constant touch with our embassy and are monitoring the situation. We will carefully consider all aspects and decide well in time."

Seoul and Washington, which lack diplomatic relations with the North, are taking the threats seriously, though they say they have seen no signs that Pyongyang is preparing for a large-scale attack.

Kim Jang-soo said the North would face "severalfold damages" for any hostilities. Since 2010, when attacks Seoul blames on North Korea killed 50 people, South Korea has vowed to aggressively respond to any future attack.