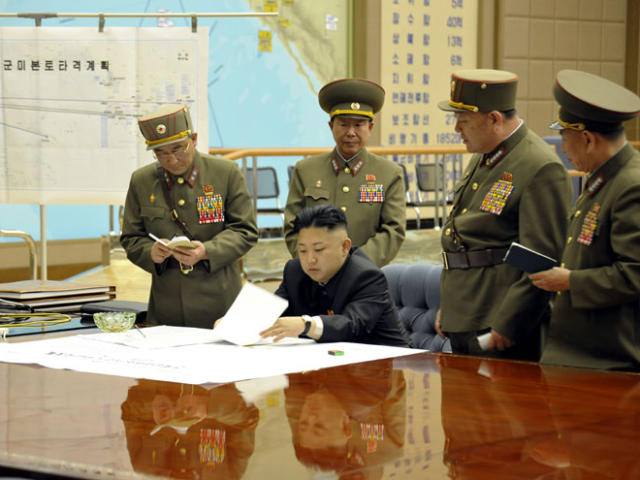 In recent weeks, amid increasing North Korean threats to the United States and beyond, the Obama administration has responded with a flex of its military muscle: After North Korea severed a military hotline with South Korea, the U.S. sent nuclear-capable bombers to the South. When North Korea declared a "state of war" with South Korea, the U.S. military sent stealth fighter jets, once again showcasing its defensive capabilities as a warning signal to the combative regime.

But even as the Obama administration attempts to deter further escalation through a demonstration of military might, one critical factor clouds the entire, fraught equation: Kim Jong Un, North Korea's untested 30-year-old dictator, remains largely an unknown entity to the United States. And no one knows for sure exactly how far he's willing to go in what could boil down to an international game of nuclear chicken.

"We don't have any direct contact. We don't have a diplomatic presence in Pyongyang," said Juan Zarate, CBS News' senior national security analyst. "He's a new leader ... It's not clear who's whispering in his ear."

Despite North Korea's increasingly dire warnings, experts say that so far, evidence of looming nuclear war is scant. No shots have been fired, and there's no obvious incentive for North Korea to actually take on the United States' military. To date, according to Stephan Haggard, professor of Korea-Pacific Studies at the University of California at San Diego, Kim has exercised little more than a signal of "resolve."

"To me, when we talk about escalation we typically talk about some move of military materiel or assets, or an actual military strike, or a probe, or a bullet getting fired," he said. "A lot of this is rhetorical."

Even so, America's lack of insight into the North Korean political situation breeds a fog of uncertainty over the nascent leader's potential calculus moving forward. Experts can make broad calculations about what drives Kim - for instance, the desire to solidify an uncertain leadership while, ostensibly, avoiding collective national suicide - but when it comes to more nuanced questions about "why is he choosing to put a missile here, or what political views are involved, it's obviously much more difficult to intuit," Haggard says.

"One problem no one really can ever resolve is the extent to which a country that has about a third of its population suffering chronic malnutrition ... at what point does this lead to internal tensions large enough to perhaps lead the leader to try to claim a foreign enemy to find some way of deflecting internal dissent," said Anthony Cordesman, the Arleigh A. Burke Chair in Strategy at the Center for Strategic and International Studies. "It hasn't happened yet, and it hasn't happened over a quarter of a century, but you could have made exactly that same remark about the Arab Spring - until it happened."

While no North Korean guns have been fired in the current conflict, foreign strikes are by no means unprecedented for the country: In 2010, North Korea is believed to have sunk a South Korean warship, killing 46 sailors on board. The same year, the country killed two soldiers after firing artillery shells at a South Korean island.

"In many countries, the rhetoric would be hollow," said Cordesman. "I think that everybody constantly wonders whether this strange, extreme internal political structure, which constantly threatens and then somehow mixes the threats with offers of negotiation, will always be limited to rhetoric. And no one knows."

For the United States, responding to this complicated and relatively abstruse threat presents a tricky proposition: Flexing too much muscle could ostensibly serve as a provocation, while backing off now could be perceived as ceding ground to Kim.

"The United States has multiple audiences here. You're trying to deter the North and demonstrate to them that they shouldn't be foolish in terms of their actions and that there would be a response. There's also a message to our allies in the region that we will defend them," said Zarate. "This is going to be a delicate balance."

A potential strike on South Korea would be a significant turning point in the conflict, experts say, and would put the United States in a difficult position.

"I'm actually quite worried about Kaesong industrial complex," a joint factory from which North Korea recently banned entrance among South Koreans, said Haggard. He pointed out that if North Korea barred South Koreans from exiting - rather than entering - the factory, "you would effectively have a hostage situation."

In that circumstance or a similar one, the U.S. would be forced to determine a path of recourse.

"Then the U.S. has to determine what it does. Does it act as a calmer of the situation, or does it become an actor?" Zarate wonders. "I think all of this has the potential of escalation very quickly with not a lot of communication with the North and also not a lot of understanding as to how the North is making its decisions."

Cordesman, too, cites the possibility that North Korean rhetoric might lead to an "accidental encounter" that could yield a very real escalation - when "all of a sudden these words become real military acts."

But he argues that this push-and-pull has effectively determined the state of U.S.-North Korean relations for years.

"Those uncertainties have basically had to shape our policy regardless of the presidency for two decades," he said. But of the familiarity of the scenario, he said, "It's kind of reassuring. Because when you have this long a period in which none of [the posturing] has turned to war, you have a certain reason to be confident."