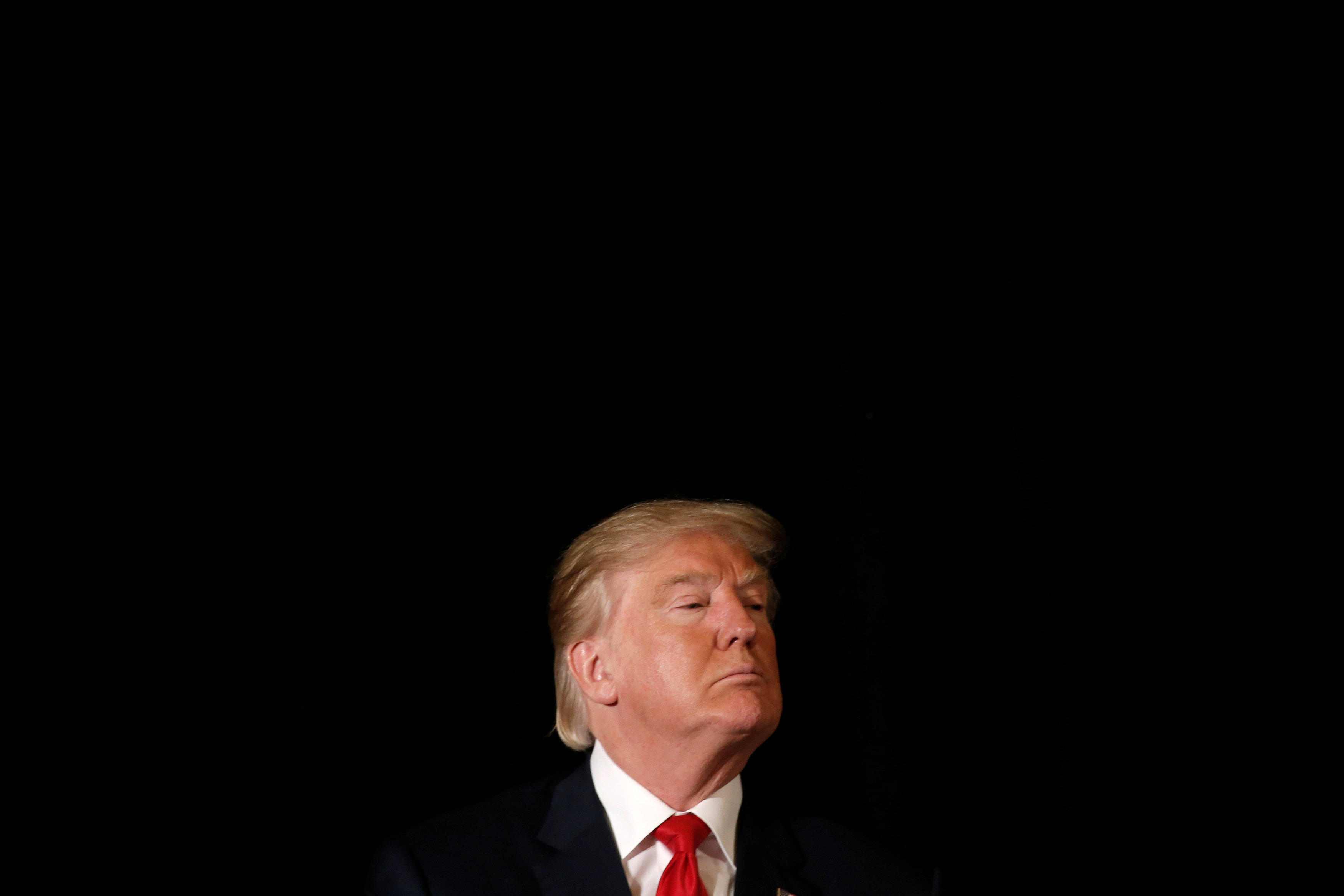 After the video leak of Donald Trump’s vulgar remarks about women from 2005, a number of Republicans have called or the GOP nominee to step down from the presidential ticket.

CBS News is compiling a list of Republicans who are pushing Trump to quit. We will continue to update this as more Republicans make their decisions about what the party should do ahead of the November election.

Trump, for his part, has said that there is “zero chance” he would step down. And while numerous Republicans would like to see Pence at the top of the ticket, the means of achieving that aren’t clear.

Sen. John Thune (South Dakota): Thune, the Senate’s Republican Conference chairman, is the first member of GOP leadership in either chamber of Congress to call on Trump to step down from the presidential ticket to let running mate Mike Pence take his place. Tweet: “Donald Trump should withdraw and Mike Pence should be our nominee effective immediately.”

Sen. Mike Crapo (Idaho): Crapo withdrew his endorsement of Trump and said the nominee’s “repeated actions and comments toward women have been disrespectful, profane and demeaning.” Statement: “Make no mistake--we need conservative leadership in the White House. I urge Donald Trump to step aside and allow the Republican party to put forward a conservative candidate like Mike Pence who can defeat Hillary Clinton.”

Sen. Deb Fischer (Nebraska): Tweet: “It would be wise for him to step aside and allow Mike Pence to serve as our party’s nominee.”

Sen. Jeff Flake (Arizona): Following Trump’s statements to media outlets that he would not withdraw from the race because of his supporters, Flake issued a scathing denunciation on Twitter. Donald Trump, Flake tweeted, “is wrong about his level of support. He needs to withdraw from the race.”

Sen. Cory Gardner (Colorado): Gardner warned that the only way for the Republican party to win in November was for Trump to quit the race. Statement: “If Donald Trump wishes to defeat Hillary Clinton, he should do the only thing that will allow us to do so - step aside, and allow Mike Pence to be the Republican party’s nominee. If he fails to do so, I will not vote for Hillary Clinton but will instead write-in my vote for Mike Pence.”

Sen. Mike Lee (Utah): Lee, who never endorsed Trump’s presidential campaign called on the nominee to “step aside” Saturday. Video statement: “Your conduct, sir, is the distraction. It’s the distraction from the very principles that will help us win in November. You yourself, sir, Mr. Trump, have stated repeatedly that the goal, the objective, has got to be to defeat Hillary Clinton in November. I couldn’t agree more. Mr. Trump, I respectfully ask you, with all due respect to step aside. Step down. Allow someone else to carry the banner of these principles.”

Sen. Lisa Murkowski (Alaska): Murkowski, who denounced Trump early Saturday, later called on Trump to quit the race. Statement: “Offensive and inappropriate statements made by Donald Trump throughout this campaign have caused me to withhold my support or an endorsement. I have always supported the Republican presidential nominee and I had hoped to do the same in 2016. The video that surfaced yesterday further revealed his true character. He not only objectified women, he bragged about preying upon them. I cannot and will not support Donald Trump for President – he has forfeited the right to be our party’s nominee. He must step aside.”

Rep. Bradley Byrne (Alabama): Statement: “It is now clear Donald Trump is not fit to be President of the United States and cannot defeat Hillary Clinton. I believe he should step aside and allow Governor Pence to lead the Republican ticket.”

Rep. Mike Coffman (Colorado): Statement: “For the good of the country, and to give the Republicans a chance of defeating Hillary Clinton, Mr. Trump should step aside.”

Rep. Barbara Comstock (Virginia): Statement: “In light of these comments, Donald Trump should step aside and allow our party to replace him with Mike Pence or another appropriate nominee from the Republican Party. I cannot in good conscience vote for Donald Trump and I would never vote for Hillary Clinton.”

Rep. Rodney Davis (Illinois): Davis, who sat on Trump’s agriculture advisory committee, rescinded his endorsement of the GOP nominee Saturday and asked that his name be removed from the panel. Statement: “With the terrible options America has right now, I cannot cast my vote for any of the candidates, so I hope Donald Trump withdraws from the race so the American people can elect Mike Pence as our next president.”

Rep. Jeff Fortenberry (Nebraska): Statement: “As Americans we are faced with two strikingly bad choices: Donald Trump, who has abused women, and Hillary Clinton who has enabled the abuse of women. It’s all wrong. For my part, I ask that Donald Trump step aside and allow Mike Pence to become the Republican nominee.”

Rep. Mia Love (Utah): Love, who had refused to endorse Trump, issued a scathing condemnation Saturday. Facebook statement: “I have said all along that I was still waiting for Mr. Trump to demonstrate his commitment to the kinds of principles and policies the people in Utah’s 4th Congressional District want in their elected leaders. Mr. Trump has yet to clear that bar and his behavior and bravado have reached a new low. I cannot vote for him. For the good of the party, and the country, he should step aside.”

Rep. Chris Stewart (Utah): Statement: “I’m incredibly disappointed in our party’s candidate. And unlike the Democrats who have proven completely unwilling to hold secretary Clinton accountable for her illegal activities that endangered our national security, I am willing to hold Mr. Trump accountable. I am therefore calling for him to step aside and to allow Mike Pence to lead our party.”

Rep. Martha Roby (Alabama): Statement: “Now, it is abundantly clear that the best thing for our country and our party is for Trump to step aside and allow a responsible, respectable Republican to lead the ticket.”

Rep. Fred Upton (Michigan): Statement: “I urge him to think about our country over his own candidacy and carefully consider stepping aside from the ticket.”

Rep. Ann Wagner (Missouri): Statement: “As a strong and vocal advocate for victims of sex trafficking and assault, I must be true to those survivors and myself and condemn the predatory and reprehensible comments of Donald Trump. I withdraw my endorsement and call for Governor Pence to take the lead so we can defeat Hillary Clinton.”

Rob Engstrom, US Chamber of Commerce VP: Tweet: “Trump should step down immediately tonight, yielding to Governor Pence as the GOP Nominee.”

Carly Fiorina: Fiorina, the former GOP presidential candidate and short-lived veep pick for Texas Sen. Ted Cruz, called on Trump to quit the ticket in a statement posted to Twitter Saturday. Statement: “Donald Trump does not represent me or my party. I understand the responsibility of Republicans to support their nominee. Our nominee has weighty responsibilities as well. Donald Trump has manifestly failed in these responsibilities...Today I ask Donald Trump to step aside and for the RNC to replace him with Gov. Mike Pence.”

Republican commentator Hugh Hewitt: The influential radio host tweeted a warning that “more and worse oppo” was to be expected on Trump in the coming weeks before the general election. Tweet: “For the benefit of the country, the party and his family, and for his own good, @realDonaldTrump should withdraw.”

Former Gov. Jon Huntsman (Utah): Statement: “In a campaign cycle that has been nothing but a race to the bottom — at such a critical moment for our nation — and with so many who have tried to be respectful of a record primary vote, the time has come for Governor Pence to lead the ticket.”

Condoleezza Rice: Facebook statement: “Enough! Donald Trump should not be President. He should withdraw. As a Republican, I hope to support someone who has the dignity and stature to run for the highest office in the greatest democracy on earth.”

Update: This post has been updated to correct the statement from Rep. Chris Stewart, R-Utah.