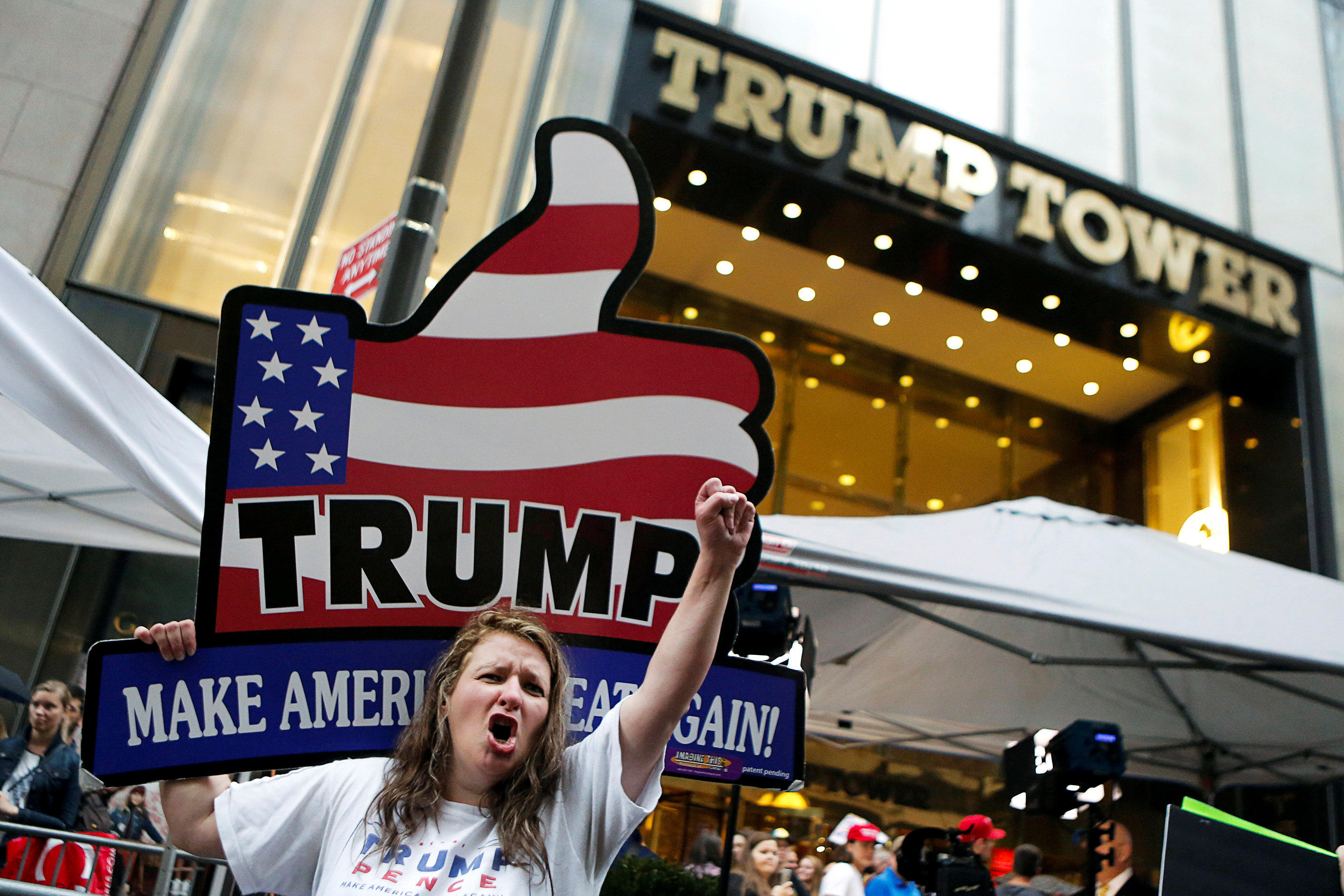 Donald Trump is refusing to back down from the presidential race, saying he would “never drop out of the race” even after a controversial 2005 tape leaked of his derogatory and vulgar comments about women.

Amid the growing revolt from the GOP, Trump emerged from Trump Tower around 5:45 p.m. and waved defiantly to a cheering crowd.

Trump emphatically tweeted that he would never let his supporters down Saturday afternoon, amid calls by Republicans to step down from the top of the ticket:

The GOP nominee made similar statements to various media outlets as well.

There is “zero chance I’ll quit,” Trump told the Wall Street Journal Saturday. The “support I’m getting is unbelievable.”

In a separate interview with the Washington Post, Trump said he’d “never withdraw.”

“I’ve never withdrawn in my life,” Trump said over the phone from Trump Tower. “No, I’m not quitting this race. I have tremendous support.”

Trump said Clinton was “so bad” that it made competing against the Democratic nominee easier.

Of the scandalous tape and how it’s dominated the news cycle over the past day, Trump added: “I’ve been here before, I’ll tell ya, in life...I understand life and how you make it through. You go through things. I’ve been through many. It’s called life. And it’s always interesting.”

Another brief phone interview with the New York Times Saturday afternoon showed that despite top Republican calls for him to step down, Trump remains defiant about his chances.

“I haven’t heard from anyone saying I should drop out, and that would never happen, never happen,” Trump said. “That’s not the kind of person I am. I am in this until the end.”

The real estate magnate added that he would “never drop out of this race in a million years.”

He stayed confident that he would still win the race.

“Oh yeah, we can win — we will win,” Trump said. “We have tremendous support. I think a lot of people underestimate how loyal my supporters are.”

Numerous Republicans have heavily criticized Trump’s comments from 2005, when he was privately recorded bragging about his attempts at having sex with women and groping them. On the tape, originally obtained by the Washington Post, Trump can be heard saying that he could “grab [women] by the p****” and “you can make them do anything.”

John McCain, the 2008 Republican party nominee, said in a statement that he and his wife, Cindy, would not be voting for Trump.

“Donald Trump’s behavior this week, concluding with the disclosure of his demeaning comments about women and his boasts about sexual assaults, make it impossible to continue to offer even conditional support for his candidacy,” McCain said. “Cindy, with her strong background in human rights and respect for women, fully agrees with me in this.”

House Speaker Paul Ryan disinvited Trump from a Wisconsin campaign event following the publication of the tape and said that he was “sickened” by what he heard.

“Women are to be championed and revered, not objectified,” Ryan said in a statement, though he did not rescind his endorsement of the GOP nominee. “I hope Mr. Trump treats this situation with the seriousness it deserves and works to demonstrate to the country that he has greater respect for women than this clip suggests.”

Some top GOP lawmakers have even pulled their support of the nominee entirely.

New Hampshire Sen. Kelly Ayotte, who faces a tough re-election battle, said Saturday in a statement that she “will not vote for Donald Trump.”

Others like Illinois Sen. Mark Kirk, whose Senate seat is also in danger this year, called on Trump to “drop out” of the race on Twitter.

Trump issued a taped apology Friday night on the matter: “I’ve never said I’m a perfect person,” he said. “Nor pretended to be someone that I’m not. I’ve said and done things I regret and the words released today on this more than a decade old video are one of them.”

And on Saturday morning, Trump noted on Twitter that it has “certainly been an interesting 24 hours!”