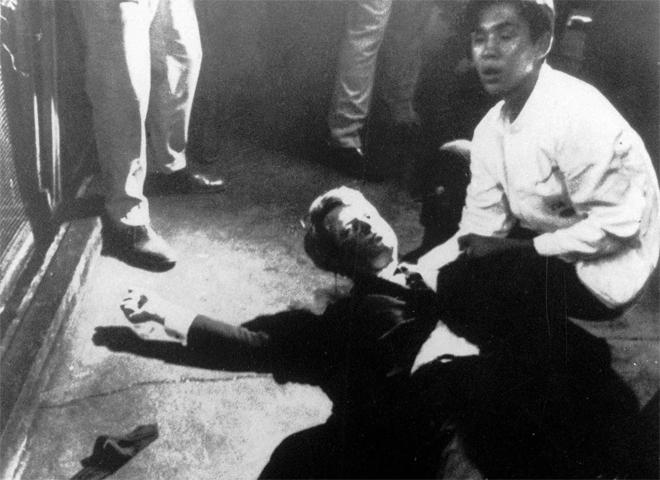 Fifty years after the assassination of Sen. Robert F. Kennedy, his son is calling for a new investigation. The presidential candidate was shot and killed in Los Angeles in 1968. Sirhan Sirhan, the man convicted for Kennedy's murder, is serving a life sentence.

Last year Robert F. Kennedy Jr. met face-to-face with Sirhan, and he says he left that meeting believing that the gunman was falsely accused.

He told the Washington Post this weekend that once he saw the autopsy report, "I didn't feel it was something I could dismiss. I was disturbed that the wrong person might have been convicted of killing my father."

On the night of June 5, 1968, Kennedy was celebrating his victory in California's Democratic presidential primary. As he was leaving, he was shot three times. He died a day later. Five others were hit but survived. Police arrested 24-year-old Sirhan Sirhan, who admitted to killing RFK, but said he had no memory of the event.

Sirhan was standing in front of Kennedy at the time of the shooting, but an autopsy report found Kennedy was shot at point blank range from behind. Over the years new evidence reportedly shows as many as 13 shots were fired that night.

But Sirhan's gun held only eight bullets. That's one reason why many now question Sirhan's guilt – including Robert Kennedy Jr.

"There were too many bullets. You can't fire 13 shots out of an eight-shot gun," RFK Jr told the Post.

Paul Schrade was also shot that night, and has doubts.

"It would be easy for somebody to slip behind Bob and shoot him," Schade told CNN. "But Sirhan was not in position to shoot Robert Kennedy after his first two shots. He missed Kennedy, and shot me."

RFK Jr. and Schrade are calling for a new investigation, something historian Doug Wead supports.

"As someone who writes history books, you cannot trust history," Wead said. "So I don't blame Robert Kennedy at all for pursuing this."

"I got to a place where I had to see Sirhan," he said. "I went there because I was curious and disturbed by what I had seen in the evidence."

Kennedy did not reveal what they talked about, but he came away convinced Sirhan did not kill his father.

Sirhan's brother, Munir, is grateful to now have Kennedy on his side. "Both Sirhan and I are elated, very happy," he told correspondent Tony Dokoupil. "Maybe now we'll have a chance to have more people to be aware of what actually happened there that night."

There is still ample evidence that Sirhan is guilty. He did confess. He had been target practicing earlier that day, and he did take his gun to the venue.

Still, as with the assassination of Robert Kennedy's brother, President John F. Kennedy, we are still debating this decades later, and the truth seems to remain elusive.

Another tourist dies in Dominican Republic

Retirement planning tips for every generation