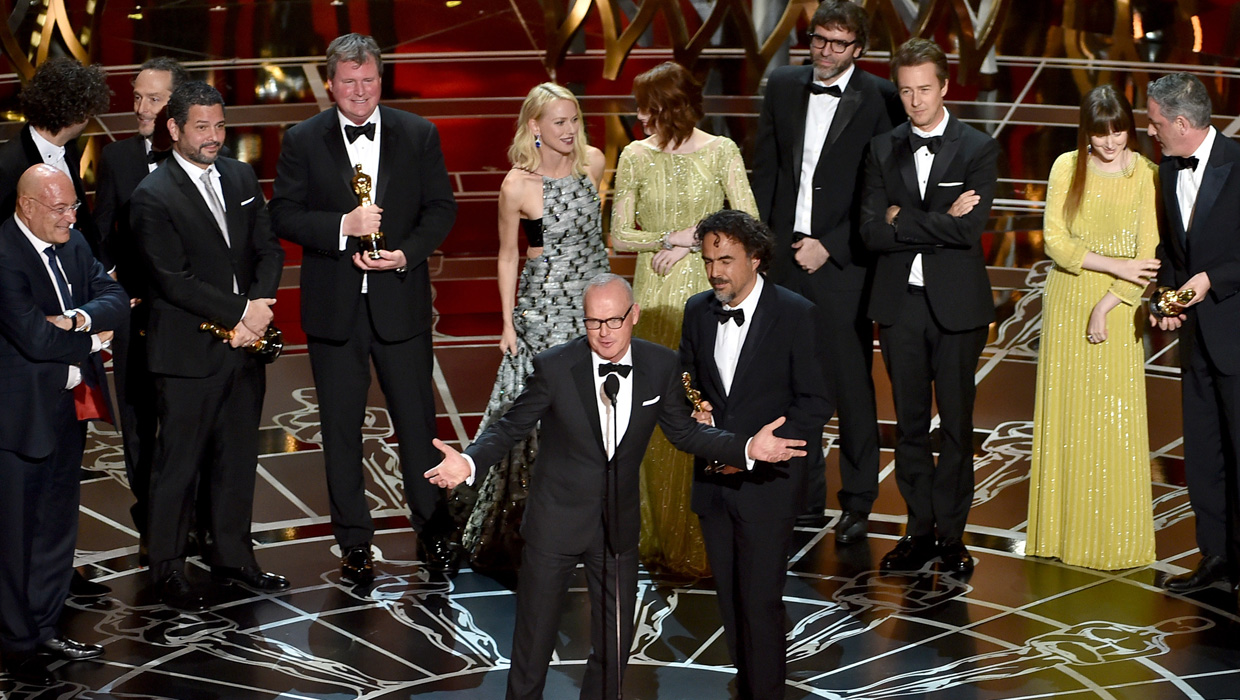 The long take of "Birdman" has stretched all the way to the Oscars, where the jazzy, surreal comedy about an actor fleeing his superhero past, took Hollywood's top honor in a ceremony punctuated by passionate pleas for equality.

In a battle of B-movies for best picture, the Academy of Motion Picture Arts and Sciences awarded "Birdman" best picture, opting for a movie that epitomizes much of Hollywood -- showy, ego-mad, desperate for artistic credibility -- over one ("Boyhood") that prized naturalism and patience. "Birdman (or The Unexpected Virtue of Ignorance)" also won best director for Mexican filmmaker Alejandro Gonzalez Inarritu, best original screenplay and best cinematography.

The Oscar for best actor went to Eddie Redmayne, who tackled the real-life role of physicist Stephen Hawking in "The Theory of Everything."

"I am fully aware that I am a lucky, lucky man," he said. "This Oscar, wow! This belongs to all of those people around the world battling ALS."

Julianne Moore, winning best actress for portrayal of a linguistics professor diagnosed with early-onset Alzheimer's disease, told the audience, "There is no such thing as best actress, as evidenced by the performances of my fellow nominees."

Host Neil Patrick Harris kicked off the 87th Academy Awards with a chipper tone that sought to celebrate Hollywood, while also slyly parodying it. "Tonight we honor Hollywood's best and whitest -- I mean brightest," he said, referencing the ceremony's much-discussed lack of diversity.

Harris' opening quickly segued into a "Moving Pictures" song-and-dance routine that celebrated a love for movies, complete with dancing Peter Pan-style shadows, classic movie scenes, a Cinderella-style cameo from Anna Kendrick and a villain to his sunny outlook in Jack Black -- who jumped on stage to counter that Hollywood wasn't so fabulous, making movies "opening with lots of zeroes, all we get is superheroes."

"After 'Fifty Shades of Grey,'" Black added, referring to this weekend's top box office draw, "they'll all have leather whips."

The night's first Oscar went to J.K. Simmons, a career character actor widely acclaimed for one of his biggest parts: a drill sergeant of a jazz band instructor in the indie "Whiplash." Simmons fittingly accepted his supporting acting Oscar with some straightforward advice.

"If I may, call your mom, everybody," said Simmons. "Call your mom, call your dad. If you're lucky enough to have a parent or two alive on this planet, call 'em. Don't text. Don't email. Call them on the phone. Tell 'em you love 'em, and thank them, and listen to them for as long as they want to talk to you."

Patricia Arquette accepted the supporting actress Oscar for her role as the mother in Richard Linklater's 12-years-in-the-making "Boyhood," and delivered a passionate speech calling for wage equality and equal rights for women that had Meryl Streep and Jennifer Lopez among those cheering in the audience.

"To every woman who gave birth, to every taxpayer and citizen of this nation," said Arquette. "We have fought for everybody else's equal rights. It's our time to have wage equality once for all. And equal rights for women in the United States of America."

Tears streamed down the face of David Oyelowo, who played the Rev. Martin Luther King Jr. in "Selma" and was famously left out of the best actor nominees, during the rousing performance of the song "Glory" from the film. Immediately afterward, Common and Legend accepted the best song Oscar with a speech that drew a standing ovation.

"We say that 'Selma' is now because the struggle for justice is right now," said Legend. He noted that the Voting Rights Act, whose passage is chronicled in "Selma," has been drastically scaled down in recent years.

"I tried to commit suicide at 16 and now I'm standing here," he said. "I would like for this moment to be for that kid out there who feels like she doesn't fit in anywhere. You do. Stay weird. Stay different, and then when it's your turn and you are standing on this stage please pass the same message along."

"The Grand Budapest Hotel," a European caper released back around last year's Academy Awards, appeared headed to becoming the night's unlikely leader in trophies. It won for production design, score, costume design and makeup and styling.

Most of Sunday's early awards went as expected, though Disney's "Big Hero 6" pulled off something of an upset in the best animated feature category, besting DreamWorks' favored "How to Train Your Dragon 2."

The Mexican cinematographer Emmanuel "Chivo" Lubezki became the first to win best cinematography twice in a row. After last year winning for the lengthy shots of the space adventure "Gravity," he won for the stretched out takes of Alejandro Gonzalez Inarritu's "Birdman."

"It sounds like a nightmare," Lubezki said backstage, recalling on his first impression of Inarritu's plans to shoot it as if in one shot. "There was no book on it. It was like an experiment."

The black-and-white Polish film "Ida" took best foreign language film, marking the first such win for Poland despite a rich cinema history. Director Pawel Pawlikowski charmed the audience with a bemused acceptance speech that ran drastically over his allotted time.

Pawlikowski remarked on having made a quiet film of contemplation about withdrawing from the world, "and here we are at the epicenter of noise and attention. It's fantastic. Life is full of surprises."

"The disclosures that Edward Snowden reveals don't only expose a threat to our privacy but to our democracy itself," said Poitras, accepting the Oscar. "When the most important decisions being made affecting all of us are made in secret, we lose our ability to check the powers that control."

Harris, a frequent Tony Awards host, struck a chipper tone, while slyly mocking the Oscars or doing his own version of Michael Keaton's half-naked scene in "Birdman."

The $160,000 gift bags for attendees, Harris said, came with "an armored car ride to safety when the revolution comes." The performance by Tegan and Sara and Andy Samberg's Lonely Island of the Oscar-nominated song "Everything Is Awesome" from "The Lego Movie" let some live out their Oscar dreams, handing out golden Lego statuettes to Oprah Winfrey and Steve Carell.

Another of the evening's musical highlights: A tribute to "The Sound of Music" performed by Lady Gaga, featuring a surprise appearance by Julie Andrews.

Increasingly, ratings are driven by moments that spark social media frenzy, like when John Travolta famously mispronounced the name of singer Idina Menzel as "Adele Dazeem" at last year's show. Sunday night, she had her chance at revenge -- introducing him to the stage as "Glom Gozingo."

Head here for the full list of the night's Oscar winners.