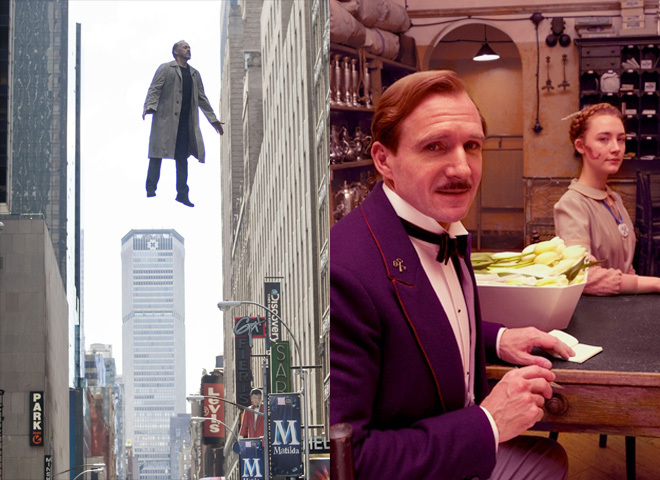 "Birdman" and "The Grand Budapest Hotel" lead this year's crop of Oscars nominees with nine nods each, including best picture.

The 2015 best picture nominees are "American Sniper," "Birdman," "Boyhood," "The Grand Budapest Hotel," "The Imitation Game," "Selma," "The Theory of Everything" and "Whiplash" -- a total of eight nominees. Over the past few years, nine films have filled the best picture category. "Boyhood," starring Ethan Hawke and Patricia Arquette, has been considered the favorite to win this year's best picture, especially after winning the Golden Globe for drama on Sunday. The movie -- filmed over the course of 12 years -- marks a milestone in filmmaking.

The nominees for best actor are Cooper, Steve Carell ("Foxcatcher"), Benedict Cumberbatch ("The Imitation Game"), Michael Keaton ("Birdman") and Eddie Redmayne. David Oweloyo of "Selma" and Jake Gyllenhaal of "Nightcrawler" were left out of the crowded category.

As for best actress? Felicity Jones ("The Theory of Everything"), Julianne Moore ("Still Alice"), Rosamund Pike ("Gone Girl"), Reese Witherspoon ("Wild") and surprise nominee Marion Cotillard for the French-language "Two Days, One Night." There had been buzz that Amy Adams ("Big Eyes") or Jennifer Aniston ("Cake") could have have been among the nominees.

A big crop of talent makes up the best supporting categories this year with some new and familiar faces: Patricia Arquette ("Boyhood"), Laura Dern ("Wild"), Keira Knightley ("The Imitation Game"), Emma Stone ("Birdman") and Meryl Streep ("Into the Woods").

The best animated feature film nominees are "Big Hero 6," "The Box Trolls," "How to Train Your Dragon 2," "Song of the Sea" and "The Tale of the Princess Kaguya."

Box office heavyweight "The Lego Movie," which received a Golden Globe nod, was absent from the list.

However, the catchy "Everything is Awesome" from "The Lego Movie" is in the running for best original song. It's up against "Glory," the Golden Globe-winning song from "Selma," along with "Lost Stars" from "Begin Again," "I'm Not Gonna Miss You" from "Glen Campbell...I'll Be Mine" and "Grateful" from "Beyond the Lights." It's a touching nomination for Campbell, who's battling Alzheimer's disease.

The 87th Oscars, slated for Feb. 22, will be hosted by Neil Patrick Harris live from Dolby Theatre in Hollywood starting at 7 p.m. ET on ABC. The "Gone Girl" star is no stranger to emcee duties having hosted the Tony Awards four times and the Primetime Emmys twice. It's his first time hosting the Oscars.

"It is truly an honor and a thrill to be asked to host this year's Academy Awards. I grew up watching the Oscars and was always in such awe of some of the greats who hosted the show," Harris said following the announcement last year. "To be asked to follow in the footsteps of Johnny Carson, Billy Crystal, Ellen DeGeneres, and everyone else who had the great fortune of hosting is a bucket list dream come true."

Oscars ratings have been on the up and up as of late. The 2014 Oscars, hosted by Ellen DeGeneres, attracted roughly 43 million viewers, marking the the most-watched entertainment telecast in a decade. "12 Years a Slave" took the best picture title at last year's Academy Awards.

Tell us: What do you think about this 2015 nominations?