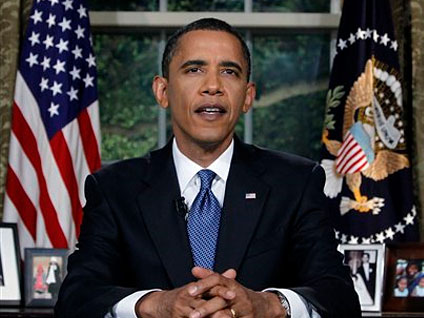 Last night from the Oval Office - a solemn setting often used by presidents to address issues of war and other national emergencies - President Obama described his "battle plan" against the oil spill in the Gulf. Earlier in the day, at Naval Air Station Pensacola before a raucous crowd of more than 3,000 cheering troops, he also evoked an image of war: "This is an assault on our shores and we're gonna fight back with everything that we've got."

There are, however, a few problems with the combat metaphor.

First - ask local officials in the Gulf region if the federal government really is fighting back with everything the government's got - 8 weeks after this "war" began - and most will tell you the answer is an emphatic "no."

They say there's not enough boom to keep the oil out of fragile marshlands, not enough skimmers to scoop it up before it reaches the beaches. And now states are starting to fight among themselves for resources, with Louisiana officials fretting that they'll be directed toward the famous and pristine beaches of Florida.

Watch CBS News Videos Online
Another problem with the combat metaphor: if this is war, the enemy is that hole in bottom of the gulf - and it's unleashing a constant stream of fire and the president is helpless to stop it. War against an opponent that can't be subdued is not an image that inspires confidence. (watch the speech at left)


Finally, when you go to war, ideally you do so with allies you can count on. The president's ally in the war against the oil pouring into the gulf is BP. But - by political necessity -- the president has treated them more as an enemy than an ally. Ever since he finally became "fully engaged" in this crisis about 2 weeks ago, the president has delivered a steady stream of attacks on BP - including last night's accusation that they've acted "recklessly."

The president's meeting today at the White House with BP executives was arranged largely to show he's on the attack - against a foreign company that has become public enemy number 1.

For the president it's not an easy balancing act, going to war against BP - or kicking their ass, as he recently put it -- while simultaneously hoping that they'll save his.