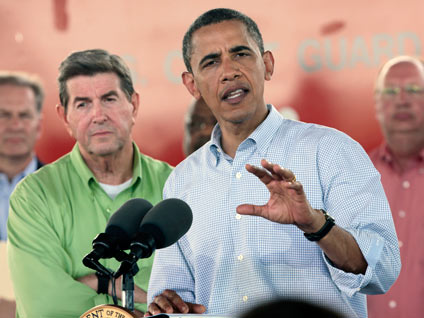 Since taking office, President Obama has made close to 600 speeches, statements and comments, but tonight he delivers only his second Address to the Nation and his first from the Oval Office.

He'll have no magic formula to announce for plugging the oil leak a mile underwater in the Gulf of Mexico. But above all else, he wants to show that he's on top of the crisis and that as he said yesterday, "the full resources of our government are being mobilized to confront this disaster."

Aides say the president will report tonight on his visit to the Gulf Coast the last two days and on "the plan going forward" to accelerate BP's capture of the gushing underwater oil leak and containment of the ever-spreading spill.

He also wants to assure the people of the Gulf and especially "those suffering economically," that a system is being put in place to insure that their damage claims against BP will be processed and paid much more rapidly.

A senior administration official says Mr. Obama will also "outline the changes necessary to ensure that a disaster such as this never happens again."

He has made all of these points and more in remarks during his swing this week through Mississippi, Alabama and Florida, but none of them carry the urgency and prestige of a prime-time Oval Office speech.

"He just thinks this is a critically important issue that a lot of people are concerned about, invested in, and want to see a resolution to," Deputy Press Secretary Bill Burton explained to reporters on Air Force One yesterday.

It's a matter of historical record that when U.S. presidents want to drive home the importance of an issue, they speak to the nation from the Oval Office.

During the presidency of George W. Bush, he delivered 23 speeches billed as an Address to the Nation of which six originated from the Oval Office. They included:

President Clinton gave 17 Addresses to the Nation, all but 2 originated from the Oval Office.

And in his final Address to the Nation from the Oval Office announcing his resignation, Richard Nixon noted it was his 37th such speech.

Mr. Obama's only previous Address to the Nation was his December 1, 2009, speech from the U.S. Military Academy at West Point announcing his timeline for the war in Afghanistan including a surge of 30,000 additional U.S. troops.

In tonight's speech, which will also serve as a prelude to his meeting tomorrow with BP executives, a senior official says Mr. Obama wants to show the he "understands the challenges and has a clear plan to meet them."

He's been trying to make that case for weeks, but still faces criticism even from individuals and organizations normally on his side.

"Americans need to know that Mr. Obama, whose coolness can seem like detachment, is engaged," wrote the New York Times in a Sunday editorial, questioning his "competence and leadership."

In Theodore, Alabama, yesterday, the president said he can't promise that the oil spill will be cleaned up overnight. He acknowledged that it will take time for things to return to normal and Gulf residents will continue to be frustrated and angry.

"But I promise you this," he said, "that things are going to return to normal." And in the end, he said he is confident "that we're going to be able to leave the Gulf Coast in better shape than it was before."

Expect to hear a similar pledge from him again tonight.

You can watch the speech live at 8 p.m. ET on your CBS television station or here at CBSNews.com.