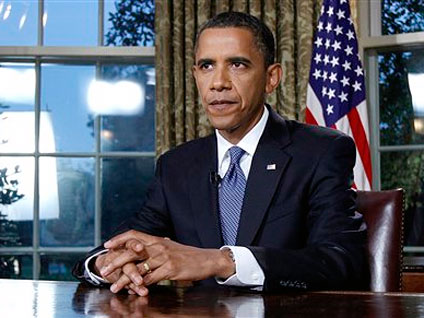 President Obama's prime-time speech last night was roundly panned by many liberal and conservative commentators alike for being too broad and lacking in specifics -- but the left and the right came away with different readings of how forcefully the president pushed for a cap-and-trade plan (a means of putting a price on carbon to curb greenhouse gas emissions).

Kate Sheppard, who covers energy for the liberal magazine Mother Jones, bemoaned that "what his speech lacked was specific directives, which is what the Senate needs at this point."

As CBS News Capitol Hill Producers Jill Jackson and John Nolen report, energy legislation is stalled in the Senate, and lawmakers are doubtful the Senate can find 60 votes for a comprehensive plan that includes carbon pricing.

"There wasn't even a clear call for a carbon cap, which I fear all but dooms its chances this year," she wrote. "Guidance from the White House is what moved health care reform and financial re-regulation, but Obama still hasn't asserted himself on climate and energy in the same way. Tonight was that opportunity. He didn't take it."

Jason Linkins of the Huffington Post took the president to task for his lack of details.

"I am really not entirely sure what the point to this Oval Office address was!" he wrote. "Were you looking for something that resembled a fully-realized action plan, describing a detailed approach to containment and clean up?... Maybe you were looking for a roadmap-slash-timetable for putting America on a path to a clean energy future? Well, this speech was none of those things."

Josh Green of the Atlantic, in a blog post entitled, "Obama Goes Small," notes that "Not once did he utter the phrase, 'It's time to put a price on carbon.' And that suggests to me that this speech was primarily about containing the damage to his administration, and was not the pivot point in the energy debate that many people were hoping for."

Conservatives skeptical of Democrats' carbon pricing plans, however, thought the president last night confirmed his support for the plan. Daniel Foster of the National Review Online even wrote about the president's "carbon tax cheerleading."

"I was somewhat surprised to see President Obama use his first Oval Office address to repeat populist platitudes about 'making BP pay' and hit the bullet points, for the umpteenth time, of the Democrats' ill-advised cap-and-trade scheme," Foster wrote.

His colleague from the National Review, Jonah Goldberg, wrote for the New York Post that "last night we saw just the latest installment of 'Never Let a Crisis Go to Waste,' written by Rahm Emanuel and performed by The One. The immediate goal: to create the political climate where BP will bend over and say 'thank you sir, may I have another' in perpetuity. Beyond that, to browbeat the public and Congress into accepting some version of cap-and-trade legislation that will export jobs and raise energy prices in the middle of a recession."

Jennifer Rubin of Commentary Magazine acknowledged that the president did not directly endorse a price on carbon but insists he did so more subtly.

"Naturally, the long-term solution is his climate-change proposal, which many in his own party won't support," she wrote. "It is, of course, a massive new tax, which he tries to sneak by with this description: 'Now, there are costs associated with this transition.'"

She concludes, however, that the president can't help the liberal cause: "Will this help push through cap-and-trade? Not in the least."

Ed Morrissey of Hot Air ridiculed the president for talking about wind turbines, but he largely focused his criticism on the overall lack of specifics from the president: "This speech was suited for Day 1 of a catastrophe, not Day 57. It had no answers at all. None. It's as if Rip van Obama awoke after eight weeks of slumber and had been told just that morning about a massive problem in the Gulf of Mexico."