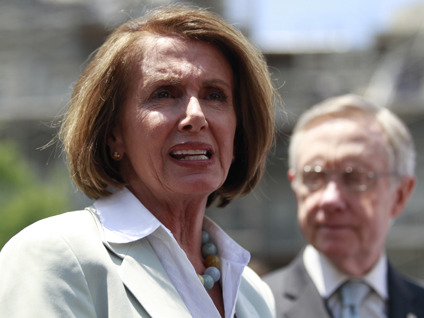 President Obama, in his national address Tuesday evening, said the country must work to cut its dependence on fossil fuels.

"The consequences of our inaction are now in plain sight," Mr. Obama said. "Countries like China are investing in clean energy jobs and industries that should be here in America. Each day, we send nearly $1 billion of our wealth to foreign countries for their oil. And today, as we look to the Gulf, we see an entire way of life being threatened by a menacing cloud of black crude."

But the president's calls for reform may not be enough to settle this already contentious fight over an energy bill  on Capitol Hill, which has been long stalled in the Senate over disagreements on whether to include climate change rules as part of any energy bill.

Senate Majority Leader Mitch McConnell on Tuesday urged Mr. Obama to focus on stopping the oil spill and cleaning up the gulf rather than pushing for a new energy policy.

"With all due respect to the White House, the wetlands of the bayou, the beaches of the coast, and our waters in the gulf are far more important than the status of the Democrats' legislative agenda here in Washington," McConnell said on the Senate floor. "Americans want us to stop the oil spill first and until this leak is plugged, they're not in any mood to hand over even more power in the form of a new national energy tax to a government that's so far at least hasn't lived up to their expectations in its response to this crisis."

While the oil spill disaster in the Gulf reinforces, for many Democrats, the need to develop alternative fuels and put a price on carbon, it hasn't made it any easier to pass a bill that addresses both energy and climate change in the Senate.

Supporters of a broad climate change bill are making a push to include reducing carbon dioxide emissions and carbon pricing in any energy legislation the Senate considers this summer.

But lawmakers are doubtful the Senate can muster the 60 votes needed to include climate change policy language in any energy proposal. A procedural vote in the Senate last week signaled that Democrats are short the 60 votes they would need to advance any new proposal to curb global warming.

The House passed a climate change bill last summer that aims to reduce carbon emissions from major polluters 80 percent by the year 2050 and establishes a cap and trade program. It also includes billions of dollars for investments in new clean energy technology.

While the House continues to wait for action in the Senate, House Speaker Nancy Pelosi has made clear that she is not going to sit around and wait for the Senate to act on legislation related to the oil spill. She's asked her committee chairman to prepare legislation by the July Fourth recess.

One idea is to start with the energy bill which passed out of Senate Energy and Natural Resources Committee last year with bipartisan support and build on that. Meetings have been taking place between Leadership and Committee Chairmen to come up with ideas for the best way to proceed on energy legislation.

The House could also take up myriad bills before August. One would lift the oil liability cap completely. Another would raise the amount of compensation the oil companies would pay to widows and families of the deceased oil rig workers.

Rep. Nick Rahall (D-W.Va.) has proposed a bill that would overhaul the Mineral Management Service and create a new bureau at the Interior Department to regulate oil leasing. It would also overhaul offshore and onshore energy leasing and production programs.

Rep. Ed Markey (D-Mass.) announced at a hearing today that he plans to introduce a bill that would invest in new technologies to "ensure that we have 21st century technologies in place for 21st century drilling risks."

Pelosi said last Friday that "no decision has been made about bundling them together. Most likely we would probably take them as they are ready."

Senate Democrats are expected to meet on Thursday in order to discuss options for a path forward on an energy proposal. Oil industry liability caps could be addressed as part of the broader Senate energy bill. Senators should be able to find bipartisan support for addressing alternative energy sources and ensure safety of off shore drilling practices.