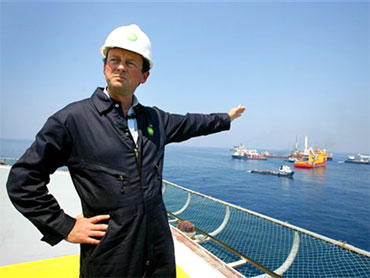 The two answers President Obama gave in the Matt Lauer interview that struck most people, I think, were the line about needing to know who's ass to kick (duh) and the fact that after 50 days he still hasn't spoken directly to BP CEO Tony Hayward.

Put the two together - and given some of the things Hayward has said recently, like wanting to get his life back - and you'd think Mr. Hayward's posterior would have a sign on it. A sign not unlike the ones we used to surreptitiously tape to people's butts in junior high school that said "kick me."

We pressed Robert Gibbs today on whether Hayward's backside is on the president's target list, and Gibbs responded that the president had sent Admiral Thad Allen to meet with Hayward today to complain about BP's chaotic compensation system.

There was a lot of skepticism in the White House press room as to whether that amounts to the kind of butt-kicking the president was really talking about.

Gibbs also argued that Hayward has to get everything he does approved by the Board of Directors, suggesting, I believe, that having the president call him directly wouldn't make much difference. Then why, we asked, doesn't the president call Hayward AND the entire Board to the White House and give them a piece of his mind -- or his foot?

Washington Post reporter Michael Shear even pulled up the BP Board identifier on his iPad, a helpful gesture to get the ball rolling. Gibbs made a joke about the wonders of the iPad and pointed to the next reporter, leaving us wondering whose - if anyone's - keister is in the president's sights.