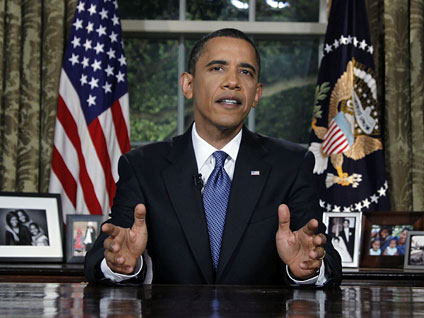 In the same Oval Office where his predecessors over the years briefed the nation about its worst crises, President Obama Tuesday night likened the BP oil leak in the Gulf to a disaster, an epidemic and even an attack on the nation.

Yet his address to the nation came not at the start of the attack, but eight weeks to the day since it began.

Mr. Obama went to great lengths to avoid the appearance that the covernment was playing catch up. Yet he conceded it's a situation "that we will be fighting for months and even years."

He wanted to be seen taking a tough and determined stand in response to the oil spill, even on Day 57 of the crisis.

"Make no mistake," he said early in his speech, "we will fight this spill with everything we've got for as long it takes. We will make BP pay for the damage their company has caused. And we will do whatever's necessary to help the Gulf Coast and its people recover from this tragedy."

He referred to his course of action as a "battle plan," describing his goals of cleaning up the oil, aiding the people of the Gulf and making sure "that a catastrophe like this never happens again."

But he had no magic formula to announce that might quickly plug the underwater leak and reverse the expanding spill.

"No matter how effective our response becomes, there will be more oil and more damage before this siege is done," he warned.

His speech came on the eve of his first meeting with BP executives, although his schedule for Wednesday showed he would only spend 20 minutes in the session.

He bluntly accused BP of "recklessness" in its handling of its offshore oil drilling operation. He said he would serve notice on BP's Chairman of the Board that he must set aside sufficient funding to compensate those in the Gulf who have suffered economic losses because of the "company's recklessness. " But Mr. Obama did not specify an amount.

He said the compensation fund "must and will be administered by an independent third party." But he didn't name any individual he had in mind for that job.

A senior administration official said earlier those issues would be decided in the talks with the BP execs.

But Mr. Obama touched a political nerve when he used his address to deliver a new pitch for the energy and climate legislation he's been advocating since taking office.

He said the oil spill is one of the lessons to be learned because America is not moving swiftly enough to reduce its dependence on fossil fuels and develop alternative forms of energy.

He didn't use the phrase "cap and trade," but did say he wants a bill that "finally makes clean energy the profitable kind of energy for America's businesses."

Even before Mr. Obama spoke, House Republican Leader John Boehner anticipated the strategy and was out with a statement saying the president "should not exploit this crisis to impose a job-killing national energy tax on struggle families and small businesses."

The president had to know the reaction from opponents would be bitter, but was decidedly determined to make it part of his speech just the same.

He made it clear he thinks the factors that led to the oil spill back his position for a new national energy policy.

What's behind the push for a fourth stimulus check
Mark Knoller