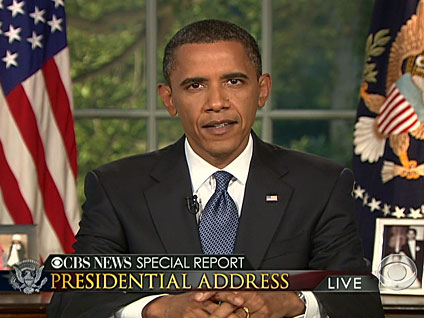 President Obama sought to assure Americans Tuesday night that he and the federal government are doing everything they can to confront the still unfolding environmental disaster in the Gulf of Mexico - and channel the rage that many Americans are feeling toward BP and the other companies responsible for the oil leak that has been spewing for 57 days and counting.

"Make no mistake: we will fight this spill with everything we've got for as long it takes," he said. "We will make BP pay for the damage their company has caused. And we will do whatever's necessary to help the Gulf Coast and its people recover from this tragedy."

In his first Oval Office address, the president spoke in prime time for about 20 minutes about continuing efforts to stop the leak and limit the environmental and economic fallout, describing the leak as an "epidemic, one that we will be fighting for months and even years."

He said Americans in the Gulf coast are feeling sadness and anger about the spill not just because of lost wages and opportunity but because of "a wrenching anxiety that their way of life may be lost."

"I refuse to let that happen," Mr Obama said.

He also announced that he is directing that a compensation fund be set up for workers and businesses harmed as a result of the leak. The fund will be administered by an independent third party in an effort to ensure that claims be paid in a "fair and timely manner."

Mr. Obama stressed that the fund will not be controlled by BP, but he did not specify how big it will be. On Monday members of Congress requested that BP put $20 billion into such an account as a "first step."

The president spent a significant portion of his remarks pressing for a transition away from fossil fuels, though, notably, stopped short of specifying what he would like to see in a climate and energy bill.

"Now, there are costs associated with this transition," Mr. Obama said. "And some believe we can't afford those costs right now. I say we can't afford not to change how we produce and use energy - because the long-term costs to our economy, our national security, and our environment are far greater."

The speech marked the latest in the White House's effort to show leadership on the tragedy that has largely swallowed up the administration's agenda. After initially being criticized for alighting to closely with BP, the White House and Mr. Obama have turned increasingly critical of the company, with the president going so far as to say he would have fired BP CEO Tony Hayward.

While the White House has bristled at comparisons to former President Bush's handling of Hurricane Katrina, its aggressive response in recent weeks has signaled concern about potential fallout from its handling of the disaster.

The president returned to Washington for the Oval Office address after spending Monday and Tuesday meeting with officials and those affected by the spill on the Gulf coast. As part of his fourth visit to the region, he traveled to the Florida panhandle earlier Tuesday where he met with Gov. Charlie Crist and local officials about cleanup efforts that many have described as chaotic.

As he returned the government announced that it had revised its estimate upwards of how much oil is spewing into the Gulf. The new estimate is that as much as 2.5 million gallons are entering the Gulf every day - for a potential total of 143 million gallons so far.

That is 14 times the size of the Exxon Valdez spill, and reflects the belief that the decision to cut a riser in an effort to cap the leak increased the flow of oil by up to 50 percent.

Mr. Obama's remarks come one day before he will sit down with Hayward and the Chairman of BP's Board, Cal-Henric Svanberg in Washington. At the meeting, he said, he would "inform" Hayward that "he is to set aside whatever resources are required to compensate the workers and business owners who have been harmed as a result of his company's recklessness."

Said a BP spokesperson following the speech: "We share the President's goal of shutting off the well as quickly as possible, cleaning up the oil and mitigating the impact on the people and environment of the Gulf Coast. We look forward to meeting with President Obama tomorrow for a constructive discussion about how best to achieve these mutual goals."

The president said Tuesday that nearly 30,000 people are working to combat the spill along with thousands of ships and 17,000 National Guard members deployed along the coast. He said more than 5.5 million feet of boom have been laid and that the government has approved construction of new barrier islands to slow down or stop the oil.

Mr. Obama said he expects BP to be capturing "up to 90 percent" of the leaking oil "in the coming weeks and days."

"As the clean up continues, we will offer whatever additional resources and assistance our coastal states may need," said the president. "Now, a mobilization of this speed and magnitude will never be perfect, and new challenges will always arise. I saw and heard evidence of that during this trip. So if something isn't working, we want to hear about it. If there are problems in the operation, we will fix them."

Earlier Tuesday, the president announced a new head of the US Minerals Management Service, the oversight agency that Mr. Obama is restructuring after acknowledging a cozy relationship between the agency and the industry it is meant to regulate. Michael R. Bromwich will be charged with overseeing the effort to restore "integrity and rigor" to the agency, according to the White House.

"Over the last decade, this agency has become emblematic of a failed philosophy that views all regulation with hostility - a philosophy that says corporations should be allowed to play by their own rules and police themselves," Mr. Obama said. He said Bromwich will work "to build an organization that acts as the oil industry's watchdog - not its partner."

In his remarks Tuesday night, the president said he is committed to developing a long-term plan for the restoration of the Gulf Coast to address not just the Deepwater Horizon spill but the lingering effects of Hurricane Katrina and other disasters.

He said the plan will be overseen by Ray Mabus, the Secretary of the Navy,working with state and local communities and businesses. "And BP will pay for the impact this spill has had on the region," he added.

Mr. Obama stood by his moratorium on offshore drilling despite calls from some lawmakers to lift the ban, which they said was further straining an already economically-ravaged region.

The president noted that oil is a "finite resource" that Americans consume in far greater quantities than the country can produce, leading to negative consequences for the environment and economy.

"For decades, we have known the days of cheap and easily accessible oil were numbered," he said. "For decades, we have talked and talked about the need to end America's century-long addiction to fossil fuels. And for decades, we have failed to act with the sense of urgency that this challenge requires. Time and again, the path forward has been blocked - not only by oil industry lobbyists, but also by a lack of political courage and candor."

"Now is the moment for this generation to embark on a national mission to unleash American innovation and seize control of our own destiny," he added, stating that "the one approach I will not accept is inaction."

"The oil spill is not the last crisis America will face," the president concluded in his remarks. "This nation has known hard times before and we will surely know them again. What sees us through - what has always seen us through - is our strength, our resilience, and our unyielding faith that something better awaits us if we summon the courage to reach for it. Tonight, we pray for that courage. We pray for the people of the Gulf. And we pray that a hand may guide us through the storm towards a brighter day."

In a statement following the speech, Republican National Committee chair Michael Steele accused the president of "manipulating this tragic, national crisis for selfish political gain," which he said "demonstrates President Obama's inability to aptly lead our nation out of a disaster, but also reveals the appallingly arrogant political calculus of this White House."