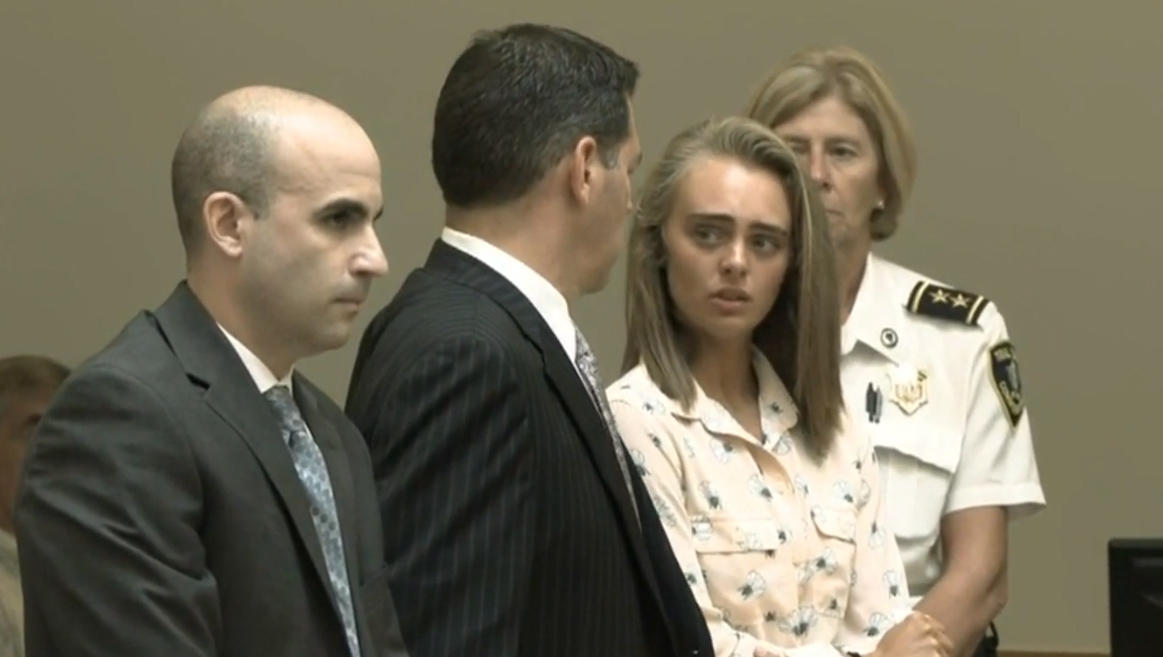 TAUNTON, Mass. -- A young Massachusetts woman accused of sending her boyfriend dozens of text messages urging him to kill himself when they were teenagers was found guilty of involuntary manslaughter Friday.

Michelle Carter was charged in the death of Conrad Roy III. Carter, then 17, cajoled Roy to kill himself in July 2014 with a series of texts and phone calls, prosecutors alleged. Roy died when his pickup truck filled with carbon monoxide in a store parking lot in Fairhaven. After he exited the truck, Carter told him to "get back in," prosecutors said.

Prosecutors allege Carter pushed Roy to commit suicide because she was desperate for attention and sympathy from classmates, reports CBS Boston, and wanted to play the role of a grieving girlfriend. Carter's lawyer, Joseph Cataldo, said Roy was intent on killing himself and took Carter along on his "sad journey."

While Roy took "significant actions of his own" to take his own life, Carter's instruction to get back in the truck constituted wanton and reckless conduct, the judge said. Even though she knew he was in the truck, she didn't take action to help him by calling the police or his family, Moniz said.

"She called no one and finally she did not issue a simple additional instruction -- get out of the truck," Moniz said.

Carter cried as the judge read his verdict and sobs broke out in the courtroom.

The judge set sentencing for Aug. 3. He ruled that Carter, now 20, can remain free on bail but ordered her not to make any contact with Roy's family and not to leave the state. She faces a sentence of probation to 20 years in prison.

"I don't believe she has a conscience," Lynn Roy tells Erin Moriarty. "I think she needs to be held responsible for her actions 'cause she knew exactly what she was doing and what she said."

Carter and Roy met in Florida in 2012 while visiting relatives. Their relationship largely consisted of text messages and emails. The sensational trial in Taunton offered a window into teen depression and suicide through text messages and Facebook communications.

"You're finally going to be happy in heaven. No more pain. It's okay to be scared and it's normal. I mean, you're about to die," Carter wrote in one message.

Her texts later became more insistent after Roy appeared to delay his plan.

"I thought you wanted to do this. The time is right and you're ready __ just do it babe," she wrote.

In another text sent the day Roy died, Carter wrote: "You can't think about it. You just have to do it. You said you were gonna do it. Like I don't get why you aren't."

Carter's friends and acquaintances who took the witness stand described Carter's texts to them in the hours before and after Roy took his life–some saying he was missing, some saying she was on the phone with him when he died–and some said they were surprised at the texts, because they weren't very close with Carter, the station reported.

"I was talking on the phone with him when he killed himself ... I heard him die," Carter texted to Olivia Mosolgo days after Roy's death, Mosolgo testified.

Roy, 18, had a history of depression and had attempted suicide in 2012, taking an overdose of Tylenol. Roy's mother testified at Carter's trial that Roy seemed to improve after he began taking medication and getting counseling. He graduated from high school in 2014 and had plans to attend college, she said.

"This has been a very tough time for our family. We'd like to just process this verdict," Roy's father, Conrad Roy Jr., told reporters after the decision.

Carter, then 17, also had struggled with depression, as well as anorexia, and had been prescribed antidepressants. Cataldo said Carter was struggling with "baggage" of her own at the time.

A psychiatrist who testified for the defense said Carter was suffering from side effects from an anti-depressant she was taking.

Cataldo said Carter became "overwhelmed" by Roy's suicidal thinking after she initially tried to talk him out of it and urged him to get professional help.

"It was his constant wearing on Michelle Carter for over a year and a half of 'I want to take my own life,'" Cataldo said.

Cataldo said Roy chose to take his own life, reports CBS Boston, and Carter can't be held responsible for it.

He pointed to a text to Carter in which Roy wrote, "There is nothing anyone can do to make me want to live."

Moniz said he did not take into account in his verdict Roy's previous attempts at suicide.

The case has been closely watched in the legal community and widely shared on social media. In Massachusetts, an involuntary manslaughter charge can be brought when someone causes the death of another person when engaging in reckless or wanton conduct that creates a high degree of likelihood of substantial harm. Prosecutors argued at trial that her text messages supported their claim that Carter caused Roy's death by "wantonly and recklessly" helping him poison himself.

Daniel Medwed, a law professor at Northeastern University, said the judge had a difficult task in determining whether Carter's actions rose to the level of manslaughter.

The ACLU of Massachusetts condemned the verdict late Friday morning, saying it "exceeds the limits of our criminal laws and violates free speech protections guaranteed by the Massachusetts and U.S. Constitutions."

Despite the fact that there is no law in Massachusetts against persuading someone to commit suicide, "Ms. Carter has now been convicted of manslaughter, based on the prosecution's theory that, as a 17-year-old girl, she literally killed Mr. Roy with her words," the ACLU's statement read.

"The implications of this conviction go far beyond the tragic circumstances of Mr. Roy's death. If allowed to stand, Ms. Carter's conviction could chill important and worthwhile end-of-life discussions between loved across the Commonwealth," it said.

Assistant District Attorney Katie Rayburn said there are "no winners" in the case, but that she hopes the decision can provide the Roy family with closure.

"Two families have been torn apart and will be affected by this for years to come," Rayburn said.